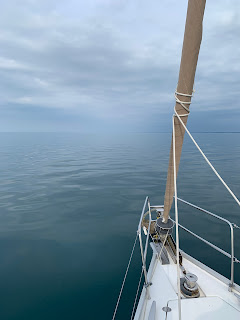 The day had finally arrived. The moment I most look forward to all year. Everything in the world seemed right as we casted off the lines and embarked on our annual sailing trip, this year on Lake Ontario to explore the US side, which had not been possible the last two years because of the pandemic.

Our friends Pat and Melissa and their baby boy Beau had taken residence in the two aft cabins of our sailboat SeaLight while Ana and I took over the front v-berth. We powered out of our home port Newport Yacht Club at 3:30 pm and into the lake. There was no wind and the lake surface was glass so we continued by motor power alone, pointed towards the town of Wilson, New York.

Most people assume sailors don't go anywhere near the lake unless there are 20 knot winds and white capped waves. Well, I can assure you that is not true. While we do like having wind to push us along, we also love being on flat water, motoring along at a comfortable 7 knots without sails, enjoying the smooth ride. And that is exactly what we had today.

We know Pat and Melissa from the many years we spent in sailing from Port Dover and were overjoyed when they expressed some interest in joining us on the boat trip. They are experienced power boaters and have been around boats their entire lives but have never done an extended trip on a sailboat. Pat is also a millwright and has suffered through countless boat disasters so has a real knack for fixing anything that might go BOOM on SeaLight. The best part is that their little boy Beau is only 8 months old so exposing him to the wonders of sailboats at this formative time just may turn him into a future sailor.

We were about halfway to Wilson when Melissa was in the cockpit and wanted to go down in the cabin but was too impatient to take the stairs so instead just stepped right off and took the elevator option straight down, sending herself arse over tea kettle, splayed out on the cabin floor. Ana and I initially felt awful, until Pat explained that Melissa always starts off her boat trips with a spectacular wipeout and really wouldn't have it any other way. We felt better after learning this, but I did have Ana check to make sure they had properly filled out their SeaLight liability waivers. 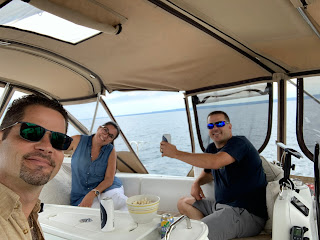 Shortly after this we decided to stop the boat and have a swim. Pat and I jumped in right away, but the ladies decided to give it a miss as the water temperature at 22 degrees Celsius was not sufficiently balmy; they would wait for warmer bays. As we were getting dried off, our friends Lydia and Daryl and their 16 year old wiener dog named Chili Dog passed by us in their power boat. They had decided to join us on our trip which was perfect as we always like to travel with power boat friends so they can get to the marinas first, find the best slips, scope out the area, pay for all the dockage, then have cold drinks waiting for us when we finally arrive by sail, many hours later.

We arrived in Wilson at dusk and were mesmerized by the pretty harbour, with boats of all shapes and sizes on one side and classic American cottages on the other, plus a busy restaurant near the entrance to the harbour, with a live band playing. We motored to the end of harbour and found our friends tied up at the state park docks, but there didn't look to be sufficient room anywhere for SeaLight so instead we anchored in the bay, but because of huge barges that were also anchored there I had to put out less chain than I normally would to prevent us from swinging around and crashing into one of them. And we couldn't move further into the bay away from the barges as there were power lines overhead, and we wanted to avoid those despite the chart showing they were 75 feet high which gave our mast plenty of clearance. The anchor seemed to stick well and soon we were settled, with drinks in hand, in the comfort of the bug-free, fully enclosed cockpit. Lydia and Daryl arrived shortly after that in their dingy and we spent several hours discussing important matters of the world...but also the “Krazy Binz” liquidation store in Stoney Creek near our marina and the five-dollar rubber vagina I found there recently, but was forbidden by Ana to purchase it, despite the potential of it being the best gag gift ever.

Posted by Kristofor Olson at 5:15 AM