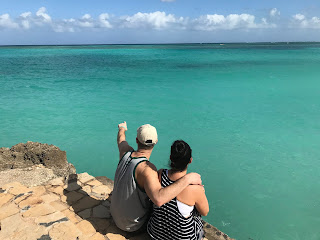 I awoke at 5:45 am, got up, went to the bathroom, and then stood there trying to figure out what to do next. I could go for a walk, but it was still pitch black outside. I could go to the lobby bar with the laptop to do some writing, but I didn’t want to get bitten by the no-see-ums which are ravenous at that time of day. I could read, but didn’t want to wake up everybody else with the light. I decided to lay down for a second to reconsider my options, knowing there’s no way I’d be able to get back to sleep, and then immediately fell asleep, and woke up again at 7:30. Problem solved.

The breakfast buffet was amazing, like they always are in Cuba. Fresh fruit, eggs to order, pancakes, bacon, many varieties of cheese, fresh juices, and even great coffee. But strangely, the bread was dry and tasteless - shocking, considering the last time we were in Cuba three years ago at the Starfish resort at Cayo Santa Maria, the bread was plentiful, amazing and delicious. Ana told me that last week she read that Cuba had been having some sort of flour importation issues, and supplies were low, so perhaps that’s the reason. Or maybe they just don’t have a good baker here.

We were looking for a good day trip so I spoke with a porter at the front of the hotel who arranged a taxi to take us to the nearby town of Guardalavaca for a small adventure. As all of you Spanish-speaking folkistos know, “Guardalavaca” translates into “guard the cow” which makes perfect sense to us omnivores out there who love our Brie, prime rib, chocolate milk, sour cream, leather couches, prairie oysters, ribeyes, tenderloins, grilled cheese sandwiches, Yorkshire puddings, and, most importantly, rock and roll leather pants with the string-up leather cord fasteners which we all aspire to wear on stage, but so preciously few of us do.

Our taxi man Osmany Ramirez drove us the 20 kilometres or so to the town and dropped us off at the market. Now I’m not big on tourist markets, but the rest of the family go bat-shit crazy for them, so it was a great starting point. Stella bought a huge bag of trinkets and souvenirs for about seven bucks and Magnus found a fancy, leather wallet he liked for less then ten. Ana may or may not have picked up some silver jewelry, but I held off until the next stop - La Casa del Habano, where I purchased a box of Romeo and Julieta #2 cigars for less then half of what they sell for at home. This took care of the only Cuban shopping aspiration I had for the week.

Osmany then took us to the Boulevard where we had a quick look at the shops and then continued onto the beach, which was expansive, clean, floury and wonderful. We took some fashion photos overlooking the beach, enjoyed some cold drinks at a cafe, and then taxi’d back to home base as it was getting blistering hot and we were aching for the water.

The beach was calling, so we began walking there but got sidetracked by the ice cream counter at the seafood restaurant. Ana suffered some humiliation when her splendid, tall, flavourful ice cream fell right off the cone and splattered on the restaurant floor. Of course, the Cubans brushed it off like it was no big deal, but the replacement cone was only half the magnificent height of the first one. She got the message.

After setting up home base on the beach under a canopy of thatch, Magnus and I went for a snorkelling adventure while the girls hit the lounge chairs and went for intermittent swims. The snorkelling was surprisingly good, considering we could swim out to the coral patches from the beach, and we saw many types of coral and fish, including four squid, which are not that easy to spot while snorkelling, especially since they are not in a circular, ringed and fried format with tartar sauce and lemon on the side, which is their most common form in Canada.

Back at the beach base, I surveyed our surroundings. As always, there was an abundance of hideous tattoos, which are more often than not, overrepresented on Canadian bodies. Look, probably 80% of our family and friends have tattoos, so I’m not trying to insult anybody, but I struggle to understand why anybody would get “FAMILY HONOUR SACRIFICE” tattooed in giant blue letters on their chest when it’s so bloody obvious that those are important things. Maybe it’s just there for you to see in the mirror as you’re shaving in the morning to remind you why you get up and go to work every day. But then, shouldn’t you get it tattooed in reverse so you could read it easier? Or maybe it’s meant to be a message to everybody else on the beach that you are a real stand-up guy. I don’t know. Maybe I’m getting too old and just don’t get it. But if I ever get a tattoo, it’s probably going to be a Motley Crue tattoo, because at least that makes a real statement.

Since the kids didn’t love the buffet lunch offering the day before, we hit the Snack Bar for burgers and fries - always reliable, predictable, delicious, and open 24 hours per day (in a row). And that’s where we met the Hamburger Family. They were seated at the table next to us, and were comprised of a Mom and a Dad and four Kids. Now normally we don’t really notice, nor care what other people are eating, but in this case we couldn’t help it. The Hamburger Family members each ordered a full meal, consisting of a big hamburger and loads of French fries, and then as soon as the lovely Cuban server delivered the food, they stood up and left the restaurant, leaving all of their food either untouched or barely touched. And this is the problem with all-inclusive resorts; they give license for people to act like total assholes. The same Cuban server returned minutes later to a deserted table, and piled up all that good food in preparation for the waste bin, to the horror and utter embarrassment of everybody else in the restaurant, who could hardly help but notice what was going on. I don’t know if they were Canadians, but if they were then I hope those people never leave the country again as this behaviour was utterly shameful. The worst part was that we found the food to be delicious, as did everybody else in the restaurant, whom all cleaned their plates and surely left the restaurant embarrassed and shocked just like us. And the Cuban server hardly batted an eye, so I guess it happens all the time.

We spend the rest of the scorching hot afternoon at the pool swimming, lounging, playing games and making underwater videos with Stella’s Go Pro-like camera. At the right point of epidural crispiness, we shuffled over to the games area and played billiards, air hockey and ping pong. I was surprised how well maintained the equipment was as this is often not the case as resorts in Cuba. I was also surprised how good the kids were at ping pong; particularly Stella, who managed to beat everybody at least once.

After a short chill-out session in the room, we went to the Mexican a la carte restaurant and had a spectacular meal that made the buffet pale in comparison. We had soup and beef appetizers and then fish, jalapeño shrimp, and steak for mains, finished up with chocolate cake baked in banana leaves and churros with a honey sauce for dessert. Tipping has become much more commonplace at the Cuban resorts - much more so than when we first started coming here, which it seemed to be almost discouraged. You generally leave a one peso tip (CDN $1.35) for a round of drinks and for dinners we’ve been leaving between three and five pesos, which isn’t a lot, but I’m sure is appreciated by the staff.

Magnus is the family scavenger and constantly scans the ground looking for items of interest. He found a little crab that was missing all of its front legs. We’re not sure if they were picked off by a person, or maybe a bird, but he was having real trouble getting around. Magnus was a little shaken up by this and wasn’t sure what to do with the creature, but decided to put him close to this hole where we’ve seen a giant crab. He thought perhaps the larger crab would tend to this little guy and nurse him back to health. But I felt compelled to tell him it’s more likely the wounded crab ended up as a nice meal for the big one. Sure enough the next morning a fresh and empty crab shell appeared in the vicinity. Circle of life, kids.

Over near the lobby, there was all sorts of action. A bride in a full wedding dress was scurrying around from place to place, appearing to be looking for something or someone. The groom was wearing this crazy, blue checkered suit and pounding rum with his best men at the bar. A group of Cubans were getting prepped for the big fashion show scheduled to start within the hour. But best of all was the game of hot potato, being curated by a fast talking MC, involving at least 30 young kids gathered in a large circle. As music blared loudly from the speakers the kids passed a bowling pin around the circle as fast as possible, and when the music stopped, whoever was holding the pin was eliminated. The MC walked over to the unfortunate player, directed the crowd to say, “Bye, bye!” and then escorted the young lad or lassie out of the circle. Sounds like a fun game, right? Well, some of the kids immediately burst into tears upon learning they were out of the game and didn’t get to be the winner. I guess they had to make a trip to Cuba to learn that sometimes you win, but most of the time you lose. It was oddly satisfying seeing these lessons in progress, and makes me wonder how well we’re preparing our kids for life when they can’t handle losing hot potato.
Posted by Kristofor Olson at 6:11 AM