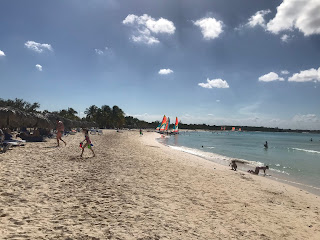 Magnus loves markets, and since we first learned of the existence of a market not too far from the hotel he has been lobbying constantly for us to go there. So after breakfast we did. It was a fifteen minute walk to Plaza Pesquero, and even at 9 am it was already scorching hot outside. Our weather thus far has been simply perfect and we were granted the heat and sunshine we were so hoping for.

Many of the shops in the plaza were still closed, but the open-air craft market was in full operation and already had a few tourists browsing around. I found a table on the patio of one of the cafes and sat back with my thoughts while the others browsed the craftiness. Shopping while on holidays (or anytime, really) is not my bag; I prefer to sit back and watch the people instead. A Cuban fellow walked up onto the patio and shook everybody’s hand that was there, wishing us a good day. He then continued onto the market and went from stall to stall, hugging each of the vendors, wishing all well. What a great way to start the day!

Instead of walking back on the main road, we decided to try and sneak into the Playa Costa Verde resort across the street so that we could make the return journey via the beach. But as we stepped into the lobby, a guard immediately noticed we were wearing the wrong colour of wrist bracelets and kicked us out, but in a most friendly manner. So Ana and I walked back along the road, but the kids hitched a ride with one of the horse and buggy operators that trot tourists around the area. The horses are not just for tourists; the locals use horses as a primary mode of transportation and you see them everywhere.

We set up base at the beach and then all four of us went for a long snorkelling adventure. Our resort and two others are located within a large, sheltered bay with water that shallow for a long way out, making it perfect for children and people who aren’t comfortable in deeper water. Our resort is located at the north end of the bay, and the bay edge has fantastic snorkelling, which is surprising considering the massive numbers of people using it. Yes, there is plenty of dead coral, which is always sad to see, but much that was still alive including fan coral, elk horn coral, and those corals that look like giant brains. After the snorkelling the kids spent a long while finding and collecting hermit crabs amongst the rocks.

The resort had a large water sports centre so I decided to take out a windsurfer. I spent some time thinking about it, and I’m quite positive I have not been on a windsurfing board for 25 years, which seems simply impossible, as I used to spend my entire summers as a kid windsurfing on Fishing Lake in Saskatchewan. Our family friend Brian Ford was the first guy to have a windsurfer and he taught me how to use it, so my dad bought us one - a Bic 250 if I recall correctly. Well I spent hours on that thing and eventually got quite proficient, even at doing tricks. When I look back now, I see that windsurfing gave me a great base for sailing and is almost definitely what spurned my love affair with sailboats. Windsurfing taught me how the wind works; how it acts on sails, how to handle gusts, how close to the wind you are able to sail, and how the sail interacts with the craft. Damn, I think I owe Brian Ford a beer!

It turns out that windsurfing is like riding a bike - I was able to pick up right where I left off 25 years before, and it felt great. I sailed out way past the range that I was probably supposed to, but I just couldn’t stop. The water was very clear so I could see all the structure on the ocean floor as I cruised by on top of the water - this is something you don’t get on fresh water lakes as the water is rarely clear. The wind was steady, but not strong enough to get a real wild ride, so I’m hoping we get some higher winds in the coming day so I can take another shot at it.

For lunch we went to the resort’s oceanside seafood a la carte, something we’ve never seen in any other resorts we’ve visited in Cuba. The food was delicious. We had seafood soup, fish tacos, shrimp tacos, fried fish and ceviche. Pure luxury.

We spent the afternoon at the pool and then shifted back to the lobby area, where they were celebrating “Cuba Day” at the resort by serving up roasted pig and beans and rice while a traditional Cuban band played music and some staff members put on a fashion show with the clothes being sold by vendors. There always seems to be something fun going on at the resort.

The afternoon chill-out session in our room was extra good, as I cracked into my cigars and enjoyed an amazing smoke out on our balcony, all alone, while the rest of the family watched tv. I put on my reggae playlist, opened a Bucanero beer, and enjoyed that cigar right down to the final half inch. Cuban cigars are best enjoyed in Cuba - they never taste quite as good as when you get them home. That perfect combination of alcohol, nicotine, and heat allows your brain to go into creative overdrive, and I decided at that moment that I need to play bass in a reggae band. But since I’m not good enough to get hired by a band, nor do I want to put in the hours to make it big, then I’m going to have to start my own, and make our modest aspirations clear from the start. I put together a mental list of all the people I know who play instruments and assigned them each a new reggae name and role in my band. There are going to be very surprised to find themselves recruited into a reggae band, but they will get used to the idea. We’re doing to do covers of classic reggae songs, and maybe even an original or two if we can think of something to say. I’m thinking our first gig will be at a Glenhyrst Christmas party and if that goes well then maybe we will play a scorching set of reggae magic at the Port Dover marina pavilion, which is in the top echelon of playing venues in that region. Dare to dream, my friends.

Our dinner at the Italian a la carte restaurant was fabulous - the look, the smells, the flavour, and the hard work of the chefs and servers made it truly extraordinary. We all gobbled up our food, loving all of it. I’m still amazed at how much better the a la cartes are compared to the uninspiring buffet. It always takes a few days to figure out the ideal routine at a resort, but I think we’ve got a good system in place - buffet breakfast, seafood lunch, and then rotate through the three a la cartes for dinner.


The lobby bar featured a piano player tonight, so we enjoyed his music while playing a game of dice, which Stella won again, easily. By 9:30 we were beat so we returned to our room and called it a night.
Posted by Kristofor Olson at 6:12 AM