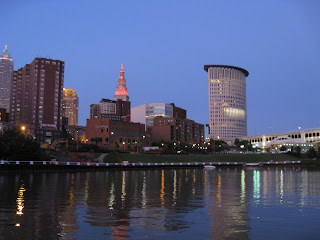 By 4:30 am we`re on the water and headed for Cleveland, beginning the first leg of our return journey home. We navigate by lights to the main channel then make our way out under sail with a beautiful west wind. As we pass Cedar Point peninsula to the right the winds starts to die and, sadly, we need to fire up the engine. At a compass bearing of 98 degrees we motor along for 10 miles at which point the wind picks up nicely so we`re back under sail. I take the opportunity of quiet time to do a bit of work while everybody is still sleeping – Ana snuggled up in the cockpit under a fuzzy blue blanket and the kids down below. It amazes me that we can be practically out of sight of land and I`m still able to send email and log into my work computer with my iPad. While this prevents work from being far from your mind on vacation, it does allow me to keep up with things and not return to work with a thousand emails and three days of catch up.

The aft wind kicks up some pretty good waves, making the boat rock and roll constantly, and I don’t mean in a Def Leppard kind of way. As we are about halfway there a US border patrol boat roars up from behind then pulls ups right beside our boat as we are underway at 7 knots, close enough for them to jump aboard. As I was downstairs testing the toilet, Ana was left by herself in the cockpit sporting her pink sailing moo-moo, plucking her eyebrows, waving nervously at the border dudes. They looked at the boat, looked at her and, after sensing no imminent threat to national security, just wrote down our registration number from the hull and sped away.

As we get close to the Edgewater Yacht club in Cleveland, the wind has picked up and created a vicious chop at the harbour entrance. Andrew had arrived there an hour before us so gave us some directions to get in and soon we were tied up at the dock, sheltered from the wind and plugged into power enjoying a cool boat, as the temperature was again in the low 30’s. As we finish tidying up after the sail, Andrew comes by and tells us of his docking experience. As they entered the marina around 11am they saw a big sign saying “Gas Dock” so they proceeded to tie up there to fill up the tanks. A man wearing blue coveralls came out to meet them and it was clear from his wobbly stride and slurred words he was completely plastered. After somehow managing to gas up the boat, he was putting the hose back on the dispensing pump when they heard a man scream and saw his legs up in the air and head on the ground, suffering a massive wipeout. After clawing his way back up, and pretending not to hear Andrew’s laughter, he met them inside to process the credit card, sporting a nice throbbing arm which was already turning blue. He undercharged them a hundred bucks then pointed him towards the gas dock down the marina which was the actual Edgewater Yacht Club gas dock, giving them some hope that the marina was not run by a crew of drunken sods. It turned out the club was indeed well run, and by completely sober staff. It was a big marina, offering close to 400 slips, with a restaurant and bar on site. They were also two weeks away from completing their outdoor pool, which would have been very nice had it been available.

We had a delicious lunch of boat burritos in the dining car (Andrew’s boat) and made sure to drop some hamburger meat on the new carpets. Since he bought new carpets this year I’ve developed a compulsive habit of dropping food and spilling drinks on it every time I’m on his boat. Seems Ana has developed this affliction as well as she dumped half her burrito contents onto the seat and carpet, and I think some also landed on the dog. One day a few weeks prior, during boat lunch at Potahawk Point I spilled food three times during a single meal – a personal best for me. The first was an oily, Portuguese Pimento Potato, which made a reddish stain, second was a scoop of Brown Baked Beans, which produced brown splatter marks and lastly I lost half a bowl of Sticky Caesar Salad, which deposited whitish skids along with crouton wads which were accidentally ground into the carpet by my heel. I later dumped a beer, but that was well after the meal so didn’t really count.

We found out there was a beach nearby so Andrew, Michelle and I took the kids while Ana stayed back to relax and get out of the sun for a while. The beach was actually very nice, and even staffed by lifeguards. The wind had produced some lovely large waves so with Stella on my back we swam out and I taught the kids some of the finer points of body surfing (wait for big wave, swim like hell, don’t drink the water). That lasted until my legs felt like jelly then we packed them up and walked back to the boat. As we were crossing the park, we were met by a worn looking roller blader who happened to stop just behind us to adjust something on his skates. Magnus, staring at the man, asks “Daddy, can I tell you a joke?”

“What wears socks…..and is bald….and has roller skates?” he asks as his eyes dart between the roller blader and me.

We return to the boat, spend a couple hours cleaning and doing a bit of work, then join Andrew and Michelle on his boat for a trip to the “Flats”, which is an area in downtown Cleveland on the river which used to be a major entertainment district, but is now mostly empty buildings with only a single restaurant remaining, called Shooters. After a short ride, which began with me spilling a full gin and tonic on the boat carpet, we are on the river and quite astounded with the number of bridges, which are everywhere you look. There are also plenty of piles of dirt and machinery around, giving it an industrial, gritty feel, which I love as I am very fond of urban grit. Andrew pulls the boat up to the restaurant, which has ample boat docking, and we get seated inside, as all the outdoor patio tables are already filled with patrons, drinking tall beers and cocktails enjoying a lovely view over downtown Cleveland.

We enjoy a delicious meal and several drinks, including Long Island Iced Teas for myself which are boozy, boozy good. During the meal, Andrew asks the server where the closest convenience store would be. He replies, “Well, the safe one is up the hill and to the right a few blocks”. Andrew and I look at each other, just to confirm we both heard the same thing.

“So there’s an unsafe one?” Andrew asks.

“Yes, that one is up the hill and to the left, in the projects,” the server replies.

“Like you’d have to be packing heat to go in there?” Andrew laughs jokingly.

We decide to skip the trip to either of the convenience stores, mainly for safety concerns, but also because on closer interrogation, Andrew doesn’t seem to know exactly what he wants to buy there anyway. Instead, we go for a walk down the river, enjoying a nice Romeo & Juliet corona cigar along the way, to the nearby Jacob’s Pavillion, where, judging by the amount of cars, there is clearly something going on. The pavilion itself is right on the water and very cool and we learn that the band The Decemberists are playing, so we hang around outside the gate listening to a couple songs, taking glamour shots of ourselves.

By now it is getting dark and we stroll back to the boat, mesmerized by the transformation of our surroundings – the grit and grime being replaced by stunning lighted bridges, buildings and roadways. We push our point and shoot Cannon to the limit, trying to capture the beauty of the moment, but knowing the photos won’t come close to capturing it.

Andrew pilots his lovely vessel safely back to the dock, where we have a quick nightcap then hit the sheets after a very successful adventure in the Flats!
Posted by Kristofor Olson at 9:43 PM