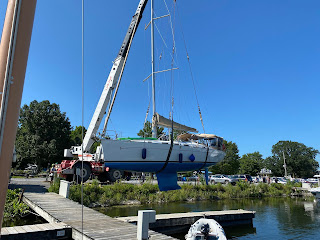 As we pulled anchor at 4am and quietly motored away from Andrew’s place, my phone buzzed with a text.

Good luck today! It was great seeing you guys.

I replied, thanks again man, we had so much fun!

We motored westward just off the shoreline so were able to watch the city slowly waking up. The few vehicles were outnumbered by the bikers and walkers on the waterfront path out for their morning exercise. The sun was up as we passed by Kingston’s downtown, and my phone again buzzed with a text.

I can see you guys! The boat looks great out there!

I looked to the shoreline but couldn’t make out Andrew’s black truck. He too had an early start as he had to travel to Hamilton today, but obviously went into the hotel before heading out to the highway. That’s Andrew, always has our back.

We arrived at Collins Bay Marina far in advance of our scheduled haul out time, so we just tied up at the gas dock and waited until they were ready for us. I then motored the boat into the far channel and into the slip right beside the shoreline and the giant mobile crane. The marina owner came by, introduced himself, then gave us a rundown of the procedure, which was basically us getting the hell out of the way and letting them take care of everything.

From the gravel parking lot we watched them rig the lifting straps up, attach the line from the crane, then lift ten tons of SeaLight out of the water like she was a floatie toy. They set her down gently on boat stands, chained them up, then leaned a ladder up against the side of the boat and handed her back to us. As I was expecting this to be a fast fix they kept all the cables and straps attached so they could get her back into the water.

While I got to work on the seal, Ana and Stella walked over to the nearby marine store to pick up a new anode for the shaft, which is a magnesium fitting that bolts onto the propeller and is used to prevent corrosion on the underwater metal pieces. Since the boat was out of the water, it was an opportune time to make this repair. It would turn out to be the only worthwhile repair done.

After removing the mattress from Stella’s cabin I discovered removable panels that gave me the access I needed to the prop, seal, and transmission. If I had been a bit smarter and discovered this earlier, then Marty and I could have easily clamped the seal and a nice temporary fix would have been in place. Lesson learned.

As I got to work it became immediately apparent that I didn’t have all the tools required for the job. Fortunately the marina owner was kind enough to lend me a bag full of tools including a gear puller, giant crescent wrenches, large sockets, hammers, and a bunch of other stuff. The job was to unbolt the shaft coupling from the transmission, which I was able to do, then remove the nut holding the coupling onto the prop shaft, which I was able to do, then remove the coupling from the tapered shaft which would then allow me to slide the old shaft seal off and slide the new one back on. Sadly, the coupling would not come off. After some cursory and unsuccessful hammering I referenced Youtube and found all the tricks usually used to remove stubborn shaft couplings. Lying prone with a lamp strapped to my head, I wrenched, hammered, torqued, twisted, beat down, inspected, oiled, rehammered, and beat the shit out of both the coupling and my own body until I was covered in bruises and could barely grip the hammer any more. Yet, the stuck coupling looked back at me, glistening with my own sweat. Somewhere along the line the marina guys came back and said they had to unhook us to go and lift a different boat. 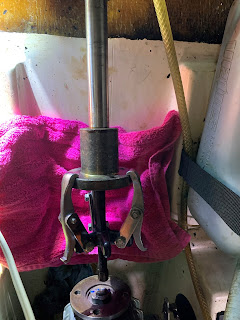 I had a peach for lunch then got back to it and worked on it for several hours more as Ana tried to help as best as she could and Stella kept herself busy watching the newly release season of Outer Banks and imagining herself as a heroic pogue. The absolute worst part of it was that it was a hot and glorious day – the best weather of the trip, and here we were high and dry in a gravel parking lot.

Andrew surprised us by arriving at the boat around 5pm, fresh back from his trip to Hamilton, and drove me to Home Depot to pick up some new tools including a propane torch. We both got back on the job and attempted to torch the fucker off. With my head in the engine compartment I flamed the coupling until a thick cloud of toxic smoke enclosed the coupling, my head, and the entire interior of the boat. I then beat it using a four pound hammer and all my might while Andrew held the prop shaft steady on the outside of the boat. But she wouldn’t budge. 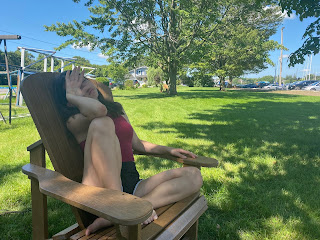 As the light was fading, we threw in the towel and caught a ride with Andrew back to his place, stopping to get McDonald’s along the way. We then watched a really, really bad horror movie, but it was nothing compared to the horror this day had become.
Posted by Kristofor Olson at 7:38 AM