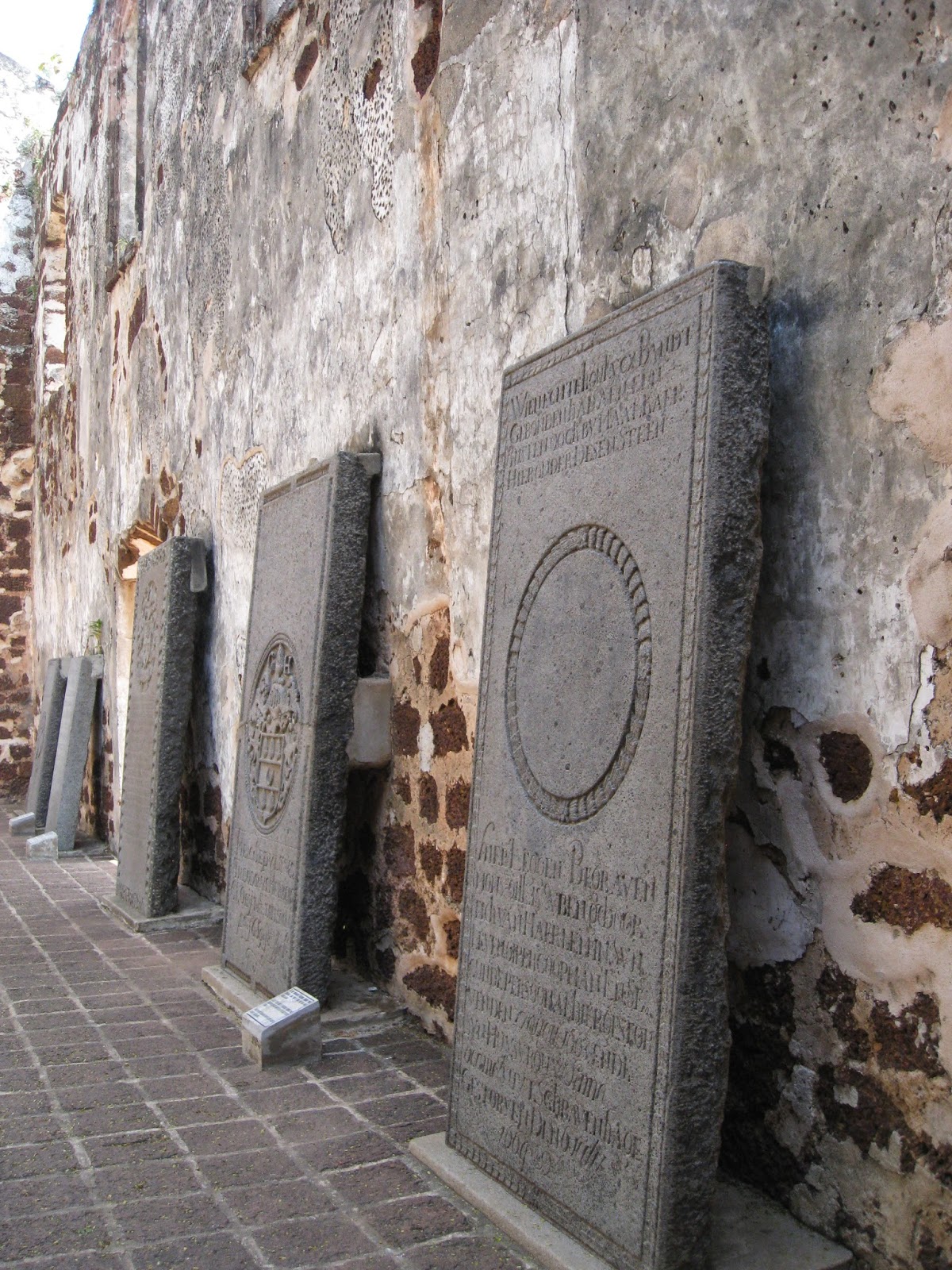 Magnus and I woke up to the sounds of the imams singing the call to prayer from the loudspeakers in the mosques.  We went to the window of the hotel but couldn’t quite see exactly where the mosques where, but thought we might like to get up early the next day and walk out to see one of the them as the people are going to pray.


On our third and final day here we decided to walk back into the centre, see the tourist sites we had missed and go to a movie.  We walked into town, finding it to be a clear and exceedingly warm day, and this time we took yet another route into town, which led us right to the beginning of the Jonker Walk, which passes through Chinatown and to the centre of town where we found the St Paul Hill area.  The centerpiece here was a 17th century fort built by the Portuguese after they had conquered the local population.  It was then converted into a church when the Dutch conquered the Portuguese, then was converted into a different church when the British conquered the Dutch, then was renamed and had a lighthouse component added when the British gave it back to the Dutch, then was converted into a tourist site when all the damn foreigners finally left Malacca alone.


After a long climb up several steep staircases you finally reach the structure on top of a hill with a stunning view over the entire city and the ocean sloshing around in the background.  Inside were some 500 year old grave markers and markers giving more information about the site.  There were also a number of vendors selling trinkets and trash (which are like lanterns to my firefly Magnus) but they simply sat there and didn’t at all approach any of the tourists.  We have found that everywhere – none of the vendors in the shops pressure you, or really even pay much attention to you at all unless you ask to buy something, which is quite nice as it lets you browse around at your own pace.


Being at the top of the hill allowed us to understand the geography of the area.  Basically, they had built a wall of malls which cut the historical district off from the ocean so if you were on the modern side you had no idea there was a centuries old fort directly behind you.  From here we were able to walk down the hill and walk through the historical side to pop up directly behind the mall with the cinema, and by that time we were exhausted by the heat and the sweet artificial mall AC was like manna from heaven.


There must have been thirty screens in this cinema as they were showing at least fifteen movies and some of them played ten times a day.  We decided on the new Transformers movie, mainly because none of us had seen it and the ones that Ana and I would have preferred probably had too many bad words for the kids.  Speaking of that, why is there so much goddamn profanity in fucking movies these days?  People don’t even talk like that in real life so I can never understand why there is so much swearing, none of which adds anything to the movie, and is mainly an unnecessary distraction.  Even the Transformers movie had the gratuitous use of the word “shit” about ten times.


So the good news is the tickets for the movie cost about twelve dollars for all four of us.  And the snacks of drinks, menthos, chips and cheezies were about four bucks.  Yes, amazingly cheap – sort of makes me thing we may be getting ripped off in Canada.  The bad news is that this was the worst movie I have ever seen in my life.  I hated it like I have never hated a movie.  I squirmed the whole way through, wishing it to be over.  It seemed like it was going to end about three separate times, then it would re-launch itself into another inexplicable, stupid sub-plot.  People in other countries who watch this movie must think that Americans (at least not the ones in the special effects industry) are completely brainless.  I felt like giving Optimus Prime a giant wedgie and slapping Marky-Mark Walberg in the face for taking on such an idiotic role.


My anger subsided about half an hour after the movie with the help of Ana talking me down from my agitated state.  We began walking back towards the hotel, again through the Jonker Walk and settled into the Geographer’s Café for lunch.  I ordered a beer (only the second of the trip so far….something about the extreme heat, high alcohol prices, and yearning for cold water), the kids and Ana got freshly squeezed juices, and we had a delicious lunch of curries, satay and Thai soup.  We are so proud of the kids on this trip so far, they haven’t complained about the heat once, are happy walking around all day, have been trying new foods, adjusted to the time difference with no problem (more that can be said for me, I’ve been doing the zombie walk between about 1 and 3 each morning) and have been curious, adventurous, little explorers.
We walked back to the hotel, went for a glorious swim, then returned to the hotel room.  I laid down on the bed at 6:30 and was zonked out shortly after that so am not sure exactly how the day ended for the rest of them!
Posted by Kristofor Olson at 6:23 AM