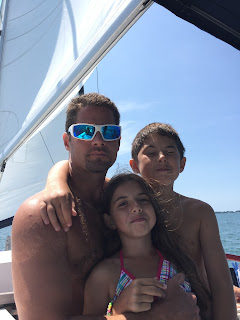 Because there was a big lightning storm predicted for last night we abandoned our original plan of leaving at 3am and sailing to Ashtabula, Ohio. Instead we slept right through the storm and woke up at a lazy 8am to overcast skies and the remaining winds from the storms which had passed. I checked the radar and the storm system had moved eastwards and there were no further incoming systems of any concern. So we decided to take advantage of the favourable conditions and make the long run back to Dover.


I went for a walk while the rest of the gang was getting ready. I strolled out to the end of the promenade that ran all the way through the marina to the outer break wall. I had a look at the water and I couldn’t see any whitecaps or dark clouds to the west. While I was out there I scared up a small duck family – a mom and a dad and a single tiny duckling that must have just recently been born. They all took off swimming but soon the baby duck took a right when his parents took a left and he went off on his own out into the middle of the bay. I watched for quite a while as the parents made their way across the water, either not realizing the baby wasn’t with them, or not too worried about it. Eventually I lost track of the duckling but I walked back on the promenade and over another concrete path build on top of one of the break walls towards where the parent ducks had swum to. By the time I got to the end and caught up to the parents, that little duckling had already arrived and was swimming around in the vicinity of his parents. I think there was some sort of deep lesson to be learned on parenting, but I was just happy the little duckling made it back to his folks.


It was about 10 when we threw off the lines and pulled away, or at least tried to, but one of the fenders got stuck on the dock and stretched it to the limit while the stern of the boat was propelled out and we nearly smashed into the boat docked beside us. Something finally gave, not sure it if was the fender, the rope or the dock, but we popped out and motored quickly away, hoping nobody saw amateur hour on the dock. We coasted into the fuel dock and the attendant lashed down the front line too quickly which again forced our stern out and smashed the front of the boat into the dock, this time much harder. What the hell is this, bumper boats?? We did a fast fill up and pump out and got the hell out of there before we caused any more damage to the facility and, more importantly, our boat. Once in the open waters we set the sails and programmed the route into the autopilot, which would take us right up the middle of Lake Erie to Long Point where we’d make a turn north and head straight into Dover.  The southeast wind was quite strong at first, but then died down as the day heated up.


I got the grill out at lunchtime and cooked up hot dogs, which we topped up with the leftover chili from the night before- Lake Erie Chili Dogs! After eating we stopped the boat and jumped in for a swim (and bath for some of us) to cool off. Though the water was a balmy 27 degrees, it was still cool and refreshing and a much needed break from the heat.


We sailed on, and on and mid-afternoon I experienced a perfect sailing moment. We had a strong, steady south-west wind pushing us along rapidly and smoothly. Magnus was laying in the shade of the cockpit having a stellar afternoon nap. Stella was down below in the vberth reading a book and relaxing. Ana was up on deck at the bow lying on a comfy chair enjoying the sun and alternating between reading a book and napping. I was sitting on the deck, near Ana, with my feet dangling over the edge catching a splash of water every once in a while when the boat dug into a big wave. The sky was clear, there was no land in sight, no boats anywhere and we had the entire lake to ourselves. When moments like this come along, I always stop, breathe them in and try to capture a mental picture of that exact point in time that will stay with me forever. We are so fortunate.


The rest of the day passed by not quickly, but not slowly, and after a delicious pasta dinner Stella and I headed to the vberth to catch a nap while Ana and Magnus took the first shift. The kids were determined to do some night sailing, as they were just too tired to participate the first day. Sometime after midnight Magnus woke us up, announcing it was time for our shift. Stella shot out of bed like a Mexican jumping bean and was in the cockpit with her mom before I was even able to rub the sleep out of my eyes. And it was now Saturday.
Posted by Kristofor Olson at 11:37 AM