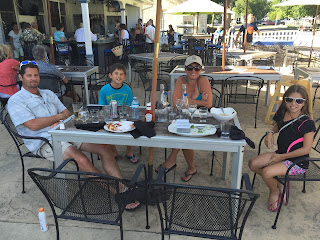 Stella and I started our day early at 12:45 am. We sent Ana and Magnus to bed for some well-deserved rest and then spent a long time together out there in the dark looking at constellations, talking, and scanning the horizon for boat lights. Stella is so inquisitive, always asking questions, always wanting to know how things work, and is never short on words. Usually the night watch is a quiet, contemplative affair, but with Stella it was a never-ending conversation. She eventually got tired and jumped back into bed, and just minutes after that Ana joined me in the cockpit with a blanket and pillow as she wasn’t able to sleep well in the vberth. After Ana fell asleep I grabbed the laptop and caught up on several days’ worth of journals as the wind pushed us closer and closer to Long Point. I soon got tired of writing so just kept watch for a few hours, probably dozing off a bit here and there, but didn’t see a single boat besides a big freighter far in the distance moving up the US coastline. We eventually creeped up on Long Point and slowly rounded it, turning north for the direct run to Port Dover. The wind slipped in strength and was soon completely gone so I wound up the sails and let the motor power us all the way back to Dover, arriving in the marina at 7am, making it a 21 hour trip from Loraine. When we were 30 seconds from our slip Stella’s head popped up from down below and as she was having a wide look around a huge smile stretched over her face, obviously happy to be home. We had a flawless docking (felt like the first of the trip), reported in by phone to customs and were all cleared and officially back in Canada. The best part was that it was only Saturday morning so we still had the weekend ahead of us


I immediately went to bed while Ana and the kids went for a drive into Port Dover. Four hours later I was up, groggy as hell, but awake. Most of our friends were out on the lake as it was another scorcher, but we'd had enough of the boat for a while so instead we jumped in the van and went for a drive with no particular destination in mind. That's the beauty of living in south-western Ontario; there so damn much stuff to see and do that you can just get in your vehicle, start driving and you are bound to find something cool every time. We took the lakeshore road all the way to Port Rowan, a town we've never really explored, and were happy we did because we found some groovy little shops, including a Thousand Villages, an old fashioned candy shop, a menswear store with great deals and probably the best antique store we've ever been to. Along the way we stopped at two wineries and a great unmanned roadside vegetable stall where the farmer simply puts out his produce and a price list and you take what veggies you want and put your money in a box. Yes, the honour system still lives in some places. So we loaded up on corn, berries and new potatoes for dinner.


We returned to the boat just in time to notice a strange electrical smell that I first thought was coming from the diesel engine after all the hard work it did last night, but then realized it was coming from the shore power outlet.  The cord was extremely hot so I pulled out and found that the end had melted and so had the housing inside the electrical outlet on the boat itself. I suspect a loose connection had caused the problem, as we'd had issues with this plug in the past, so I had actually bought a replacement, but just hadn't installed it yet. So I got to work digging out all the burnt components while Ana started dinner. Our friends Geoff, Sherry and their gorgeous baby girl Victoria stopped by for a visit so I had Geoff help me troubleshoot the electrical issue while the ladies kept watch on Victoria doing laps around the cockpit. Shortly before the meal we got a call from Tony and Angela saying they were stopping by in their boat for a drink. We helped them get docked, ate a quick meal, and then returned to their boat for happy hour. We left the whole dinner mess for the kids to clean up, as sort of a challenge, but hey, we'd been cooking and cleaning all week so it was definitely their turn.


Tony and Angela had their friends John and Caroline with them and were on their way back from having dinner at Hoover's Marina – about 7 miles east of Port Dover. We call this the home of the "hundred dollar hamburger" because by the time you power up your boat and crank up those twin 350's to get you there for lunch, you've already burned a hundred bucks in gas. We were halfway through our first beer when a dude pulled up in a Sea Doo and kicked us out of his slip, which we thought was empty. So they moved the boat to an empty slip on the next dock over, right beside our buddy Jimmy. Remember that old Kim Mitchell song "I Am a Wild Party"? Well that song was written about Jimmy after he took Kim out to the Norfolk Tavern one night back in 1989. Kim woke up the next morning face down on the beach with two black eyes, a tattoo of Speedy Gonzales on his ass, a broken toe and was wearing only a ladies bra and one sock. The first thing he saw with his one eye that could open was Jimmy sitting on the deck of the beachside restaurant drinking a vodka martini, giving him an eighteen tooth smile and a rousing thumbs up. Kim thought to himself, man that guy is a wild party and the rest is history.


We visited for two beers and then Tony and gang took off, probably scared of what would happen if they stayed too long next to the Wild Party. We wandered back to our boat and found that our children had washed all the dishes and put them away, wrapped up the leftovers, washed the table and hung up the dish towels. That bought them a whole lot of parental goodwill, I can assure you of that.


It was now fully dark outside and there was plenty of noise coming from dock two so we went over to join the Doerr boys and friends for a couple of Yeti-cold beers and told them all about our sailing trip and heard of their nice day on the water at Turkey Point. After an hour or so I went back to the boat to grab a drink and noticed Ana's phone flashing so I looked at it and saw a message from Angela saying they had experience a double engine failure and were being towed back in by the Coast Guard! We ran back over to the slip they were in beside Jimmy just as they were arriving. Jimmy, his girl Kristi and his buddy Steve were there doing shots out of a gallon jug of Jack Daniels and had the country music blaring, but they put the party on hold to help get the disabled vessel docked. We got Tony's boat tied up and then offered him the keys to our shit hot mini-van to get them back to their cabin at Turkey Point. Now I knew that Tony had never driven such a sexy vehicle with so much raw power and intense masculinity, so I had to give him a detailed briefing on how to best handle our sweet ride.


So we said goodbye to the Henriques for the third time this week (it doesn't get any easier), had a final drink with the remnants of the partiers on dock two and returned to the boat for a very good night's sleep.


And thus ends the Olson summer sailing trip for 2016.
Posted by Kristofor Olson at 6:31 AM