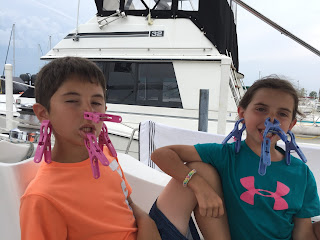 We left Kelleys at a leisurely 9:30 and had a beautiful 27.5 mile sail to the town of Loraine, Ohio. This is a town we’ve passed by many times in the past but have never stopped at, mainly because there are marinas to the east and west of it that we really love but also because several people in the past have told us there’s not much of interest to see there. Not liking to leave stones unturned, we were happy to finally get to see Loraine. We pulled into a gigantic marina and navigated gingerly to our assigned slip. There was a man there who helped us to dock the boat, and gave us a warning to watch the boards of the finger pier as they were getting a bit rotten and he had actually fallen right through his dock a couple of weeks before.
We checked in at the marina office and the two staff members were very helpful and friendly. The younger of them gave us directions how to get downtown, but did warn us there wasn’t much to see and that the nicest building down there was the police station. We learned that Loraine used to be a big ship building center, making it a prosperous and busy city, but that industry had shut down many years ago. To make things worse, the other big employer in town was US Steel but they had just recently shuttered the steel plant, putting hundreds of people out of work. This is a common theme we find as we travel the US side of Lake Erie and it illustrates so perfectly the creation/destruction cycles of capitalism. When things are good, they are very good, but at some point there is a shock in the market and things turn bad in a hurry. But it’s not usually long before those capitalist seeds are again planted in the hopes that they will flourish into something beautiful.
We did the hot walk (it must have been close to 35 degrees outside) downtown and found an absolute ruin. Perhaps only every third building was occupied, and many of these were artist studios. Many of the buildings themselves were magnificent and reminiscent of prosperous days gone by. There was an antique store open so we went inside to enjoy the air conditioned air and to have a look around. Their specialty seemed to be WW2 government propaganda signs as they were plastered all over the walls. The music being piped in was dreadful – it sounded like the soundtrack to Coronation Street played over ancient gramophone and it kept looping, and looping. From there we continued a block or two and found a coffee shop where we stopped for a cold drink, and Stella tasted her first cherry Coke. Yeah, that stuff is dreadful - one sip is about all you can take. Even Magnus found it to be too sweet, and that’s saying something.
We did a full circuit of downtown and then retraced our steps back over the bridge, along the way discussing how this town was probably ripe for redevelopment and could well be a thriving city once again if the right municipal policies and economic environment were in place. But for now, that downtown was a dead duck.
We walked to the sister marina of the one we were staying at (in search of the pool), and along the way found a lovely waterside neighbourhood with recently develop condos, plenty of green space, and a sign saying that three bedroom units were available for under $150k. We had a nice dip in the pool that was welcome after our sweaty, hot walk. We sat in the deck chairs for a while, dozed off, and then shook off the sleepies and walked back to our marina. By this time poor Stella was really dragging her paws and she announced to the family that she was feeling bummed out. Ana spun the lid of the water bottle she was carrying and blasted Stella (and me) with lukewarm water in a jovial attempt to shake the funk off. Stella didn’t see it that way. She burst into tears and had a mini-meltdown. So I took the water bottle and gave Magnus a blast in the face which turned her cries into laughter and she was okay after that.
Back at the boat the dockside breaker had tripped, so with the AC dead it had rocketed up to a nuclear 97 degrees in the cabin, but thankfully the fridges work on DC and the Yeti had plenty of ice so at least we could have cold drinks. I got the bbq fired up and slapped down some greasylicious burgers. As I was moving back and forth from the cabin to the cockpit I smashed my toe full force into one of the door panels and produced a shattered toenail worthy of the London Tate Modern Art Gallery. For the past few months my toenail had been slowly releasing itself from my toe. Ana said it was probably some sort of nail fungus, but I think the nail was just worn out. The obliteration was perfect and cut the nail right back to the skin, leaving two artistic fragments hanging, triumphantly. After the kids and I admired it for a while, I let them rip the pieces off and swordfight with them. Immediately after this the kids got the blue and pink clothespins out and clamped them to every fold of loose flesh on their faces – nose, ears and lips obviously but also eyelids, jowls and foreheads. You can have a lot of fun on a boat if you use your imagination.
Posted by Kristofor Olson at 6:44 AM