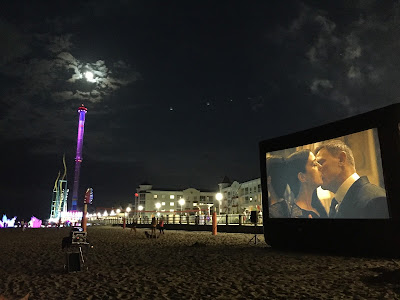 We woke up to a clear, sunny, warm morning and had a fast round of showers and toast and cereal so that we could get to the park entrance for 9am – one hour earlier than the general admission time, reserved for guest of the Cedar Point hotels and marina. Cedar Point is an amusement park that specializes in terrifying roller coasters and the kids had grand ambitions to ride as many of them as their height would allow. We walked through the gate at 9 but there were already thousands of people in the park, so I suspect there must have been an earlier gate for people even more special than park guests. We thought we might like to go on the newest roller coaster called “Valravn” but the line already snaked through all of the available gates and extended for hundreds of feet out into the park, so we instead bee-lined for the next available roller coaster – the Gatekeeper. Each of the major roller coasters are branded with a cool name and have their own dedicated gift shop full of branded merchandise right outside the ride exit.


The dude at the ride entrance looked at Stella and held up the stick to check that she was 52” tall. I think that her excited puppy dog eyes caused him to lean the stick over just enough so that she squeaked through. As soon as we arrived at the ramp there was an opening for the next coaster so Magnus and I jumped on, but the ladies were right behind so had to wait for the next one. The coaster started to move and was soon angling up the scaffolding at 45 degrees, pointed straight for the sun. I looked over at Magnus and he appeared simply terrified. He was at the point where you realize that no matter what you do, there is absolutely no way to get off the ride, or stop the ride, and the only option you have is to close your eyes and hold one. We reached the peak, stopped briefly and then we were roaring straight down to the ground to the sound of metal on metal, screaming people, insane laughter and hurricane force winding blowing past our faces. We did gut wrenching flips, inversions, twisted corners and high speed straightaways. The ride was chaotic, but finished quickly, and soon we were back at the platform, off the coaster and trying our best to walk on strangely wobbly knees. Magnus was thrilled and loved the ride, but did admit he was scared witless at the start. We watched as the next coaster containing our girls arrived, and I was happy when Stella flashed me an enthusiastic thumbs up! I guess she is going to be a roller coaster girl.


We did a few more rides, but started finding that the operators were ruthlessly sizing up Stella with the stick and she was a touch shorter than 52” so was too small for many of the rides which put her into a bit of a sour mood. But we did the rides we could and I assured Stella that when we returned later she could switch her flip flops for running shoes which would give her an extra inch and put her up to 52”.


We took a break from the rides and returned to the boat for lunch and to change into our swimsuits for the afternoon shift at Spash City – the waterpark connected to the resort. After eating we caught the resort shuttle up to the waterpark and headed right for the lazy river ride, where you float in an inner tube at a leisurely pace, but have to try and avoid the water hazards along the way like buckets of water being dumped on your head, waterfalls, water streams shooting into the river and the like. We also spent some time in the wave pool and did a few of the big water slides, but the lines were quite long so we spent a lot of time waiting, but fortunately it was hot and sunny so quite enjoyable in itself.


We returned to the boat around 5:30pm for a big feed of lasagna and garlic toast and a beer to two to wash it down. Up until this point the day had been fantastic, but quite similar to all the previous times we’ve visited the park in the past. Since the park was open until midnight we decided to head back and get Stella on some of the larger rides, and also to check out the beach party, which our friends from Port Dover had mentioned to us, and would turn out to be the highlight of the trip so far. We had Stella measured up and she was easily over the 52” so she was fiendishly happy to be able to get onto the big rides with no problems, including one called the Wicked Twister which she loved. Between rides we noticed that the Extreme Sports Stadium had a show starting at 7 so we went in and were treated to an unbelievable performance of athleticism, gymnastics, acrobatics and physical prowess. The stadium itself was a stage of four halfpipes, trampolines, stages, rope swings, ladders and platforms. And for 30 minutes a series of bikers, scooterers, in line skaters, acrobats and gymnasts flipped, spun, twisted, leaped, climbed, crashed, bounced, unraveled, jumped, ran and flung themselves all over the place, making for an amazing display of athleticism. At the end of the show I felt like grabbing one of the bikes and doing some kick ass halfpipe tricks, but my back was too sore from slouching on the bench watching the show, otherwise I really would have dazzled the crowd.


After hunting around for a bit we found the entrance to the beach and went for a walk on the expansive promenade that joins the resort and amusement park to the beautiful, fine-sanded beach and the warm waters of Lake Erie. We walked down to the beach where they had set up a large number of wood burning fireplaces and beach chairs. We sat down and chilled out for a while, enjoying the gorgeous weather and the sight of all the happy people on the beach. While we were sitting there a crew of firebreathers set up shop and soon a full on fire show was ablaze. They were swinging fiery balls around, juggling flaming sticks, and blowing fire, all for the amusement of the guests. We decided to walk a bit further up the beach and grab a drink in the lounge of the resort. We ordered up a round of ice coffees and smoothies and walked back down to the beach as we had noticed this large structure there so wanted to check it out. It was a giant inflatable movie screen and they had just started paying the latest Bond film Spectre, just as the sun had set! We got settled in beach chairs and sat back to enjoy the movie. Shortly into the movie, a scene emerged that I will never forget, let me try to describe it.


It was 25 degrees outside at 10pm. I was sitting on a comfy beach chair with Stella, Magnus and Ana all in their own chairs beside me. We were facing the giant screen watching the Bond movie with a backdrop of not just a majestic resort, but also half a dozen dazzling, lighted roller coasters and the faint screams of the riders as they looped through the perilous routes. Down the beach there was a series of lighted volleyball nets with participants laughing and screaming as they propelled glowing volleyballs back and forth, trying desperately not to let them hit the sand. Beyond the volleyball nets was a beach dance party with giant, lit up inflatable – I don’t know what these things were – but they looked like something Dr. Seuss or the makers of Pokemon might have conjured in their imaginations. And beyond the movie screen, volleyball nets, dance party, and rollercoasters was a dazzling display of fireworks, lighting up the night sky. Everything was so perfect and I sat in stunned amazement at the beauty of the scene before me. I looked at Ana and she looked at me and we just laughed…and took a few pictures.


About two third of the way through the movie Stella started falling asleep, so I threw her on the piggyback and we walked back down the promenade, but as we reached the dance party we just could not pass it up so we went down to the dance floor and Stella was instantly re-energized. The four of us danced for a few songs in the company of a few dozen others similarly enjoying the party, but then at 11pm the DJ sadly announced that he had to close up for the night, so he played us one last song and then we slowly made our way back to the boat.


Earlier in the day we had learned that Pokemon Go had become available in Canada so Magnus conned his mom into putting it on her phone, and after we had returned to the boat Ana and Magnus went back over to within wifi range of the park to see if they could find a Pokemon. Stella and I stayed and cuddled up together in the cockpit and found some perfect late night music to listen to, in the form of Men at Work and then the Mars Volta. We talked about the day and the trip so far, but mostly just sat there looking out at all the light from the roller coasters reflecting over the water. What a beautiful end to a beautiful day.
Posted by Kristofor Olson at 8:08 AM