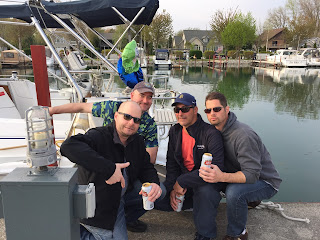 After the late night I’m happy to sleep in a bit this morning. The final leg to Port Dover will take 16 to 18 hours so our plan is to head out mid to late morning which will give us an early Monday arrival. The crew surfaces one by one and we make a round of coffees and enjoy them on the dock picnic table right beside the boat. It is an achingly beautiful day with maximum sunshine and no clouds to be seen. As we sip our coffees we fully expect Marc Gagnon to come around the corner at any time with a bottle of Molson Export and maybe a bump or two on his head but, sadly, he is a no-show.

I head over to the marina showers and have a glorious, hot soak under the endless supply of steamy hot water, what luxury! I return to the boat, passing David and Marty on the way, who were soon to learn that the supply of luxurious hot water wasn't so endless after all, and they are left with a cold water, high speed scrub down. It's good to be the captain.

By 10:30 the sailors are aching to get back on the water so we fire up the diesel and motor over to the gas dock to fuel up. As we are fuelling David takes us through a round of impressive vocal impressions; first he is Marvin the Martian, then Hannibal Lector makes an appearance, and finally his specialty – Dr. Evil. Tony even pitches in with his favourite, though somewhat twisted, impression of the freak from Silence of the Lambs. "Put the lotion in the basket!" The gas dock attendant looks on in dumbstruck awe and slowly backs away.

We head out of the harbour and the water is flat, not even a ripple as far as we can see, so it's likely to be another long motoring day. Our first waypoint is the end of Long Point, a straight shot of about 90 miles, so we set the autopilot and then everybody grabs a book and gets settled somewhere comfy – Marty and I in the cushioned cockpit, David in the v-berth and Tony takes pole position at the bow of the boat in a collapsible comfy chair. We remain like that for some time and man, is it nice. This is the warmest day so far and we have the entire lake to ourselves. The hours pass, we talk, we laugh, we read, we listen to an endless supply of music, we eat, and we enjoy the occasional beverage. Spending hour after hour on a sailboat is much different than taking long car journeys. There is always lots to do on a boat to keep yourself occupied, such as adjusting sails, plotting your course, watching for boats, having naps, cleaning the boat, fixing things, searching for missing eggs, and so on. So the hours tend to pass quickly.

Around 3pm I become so tired that I can no longer keep my eyes open so I head down for a nap, leaving the capable crew in charge. 4 hours later I emerge, feeling ultra-refreshed and I don't even catch too much slack from the boys as this was my first nap of the trip…so I made it a good one. During my absence nothing much had changed – the lads still hadn't seen any other boats and, sadly, there had been no balloon sightings. One of the boys cracks us a round of beers, and as we are enjoying happy hour eagle eye Tony spots a freighter to the south-east, many miles away. I can't even see it without binoculars, but once I do find it I see it is called the "Paul Martin Junior" so is no doubt the property of our previous Prime Minister. That prompts some inevitable political discussion, but I soon duck out and pop two lasagnes in the oven and start preparing dinner. The oven heats the cabin up nicely, and soon we are enjoying a hot meal, and probably the last together on the boat as we will soon be rounding Long Point and making the final shot to Port Dover.

As night falls the moon rises and the cloudless night provides for a stunning celestial show. The moon is full and casting an incredible amount of light. David is at the helm and enjoying the night sailing immensely. I rig up the laptop and television and put on a movie for the crew – my initial thought was to play "All is Lost" – a movie about a solo sailor in the middle of the Pacific Ocean who strikes a cargo container and eventually sinks his boat. But then I give my head a shake, realize our current situation, alone, in the middle of a giant lake and instead put on a soothing war movie. David takes a pass on the movie, explaining he doesn't want to miss a second of the night sailing.  Halfway through the movie everybody loses interest and we decide that Marty and Tony will head down for some sleep while David and I take the first night shift.

I get geared up and join David in the cockpit, bringing him a fresh coffee to keep him fully caffeinated as he is decidedly not giving up his place at the helm. We are talking together when all of a sudden David says, "What the hell is that??" pointing into the water, off the port side of the vessel. Somehow we didn't notice a refrigerator-sized piece of flotsam bobbing around in the water that we barely missed striking. We watch it pass by, dumbfounded, and can't make out what the object is, but it is very strange to see such something so large floating on the water. I would discover later that the previous week there had been a large sailboat that went down off Long Point, close to where we saw the object, so I am quite sure it was a piece of debris from the sunken boat that let loose and came to the surface.

We round Long Point, make the turn north and set the autopilot heading for Port Dover. It is now quite cold outside and the dew is collecting on the boat. The giant, glowing moon is right at our back and so bright that our figures cast shadows across the boat. I move up to the bow to take some photographs, which I know already will probably not turn out well, but feel the need to capture this mesmerizing moment. I take over the helm only when David needs a bathroom break, but other than that it is his show, and my only job is to keep him caffeinated. David tells me it's always been a dream of his to do a long sailboat trip, so when the chance to join this trip came up he jumped on it. Quite often we get complacent with the wonderful aspect of our lives, such as living in a nice house, having an enjoyable career, being part of a large family, owning nice cars, having children, being born into a rich country, having good friends and so on. The one thing I must say I never take for granted is having a sailboat and being able to explore these amazing Great Lakes. Even now, on our 6th year with Bella Blue, I sometimes have to pinch myself to ensure I'm not dreaming as I find myself on a perfect tack, surrounded by my kids and wife, cutting through the water on our way to a new destination. Being on your own boat gives you such a feeling of empowerment, of freedom, of adventure, and there really is nothing quite like it.

As we shave off the miles, I check the time and realize there is no sense in waking up Tony and Marty for a shift as our current speed will get us into Dover well ahead of time. We still have not seen any other boats, but we keep a close watch anyway. Time has now slowed to a crawl and I have a tough time keeping my eyes open for that final hour, but we finally reach the harbour entrance, and I must say that after a two season absence, it does feel like returning home.

We give the boys a shout to help with the docking. Tony looks surprisingly awake, but Marty is slow to come back to us and he is actually out on the boat, looking out at the harbour and the hundreds of boats and says, "Are we in Port Dover?"

At 2:30 am, after securing Bella Blue in her slip, we crack a celebratory beer and do a final cheers, happy to have reached our final destination. And we are not the only ones enjoying a beverage – there are at least two boats full of merrymakers on adjacent docks and the music and laughter rings out across the marina. I'm pretty sure I can hear the voice of my old buddy Jimmy, the Party Lord of the marina, but if we go over for a "quick beer" there is no way we will make it through the night alive. It feels damn good to be back in Port Dover, almost like a homecoming, and I'm very excited for the kids and Ana to get down here tomorrow.

But for now, it's time for this fine crew to catch some sleep. We covered over 250 miles on the water in three days, more than we have ever done in such a short time span. So we climb aboard, close the hatch, and put the wraps on a most excellent sailing adventure.
Posted by Kristofor Olson at 6:15 PM