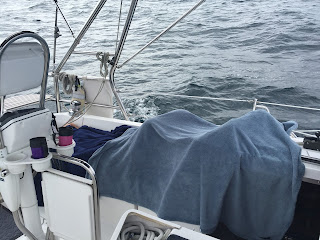 I went to bed just after midnight and joined Stella up in the v-berth. The problem with sleeping in the front of the boat is that there is a lot of noise from the sails flapping around and the hardware clanging on the deck so it sounds like the boat is in a state of perpetual emergency. Of course, you know that everything is fine…but still. I lay there for a long time trying to get to sleep, but it just wasn’t happening.  I went out once or twice to check on things, and I eventually got a few fitfull winks, but a sound sleep it was not. Ana woke me up at one point to come and see something. Out in the cockpit she pointed to the south and said, “What is that??” It was a giant freighter, maybe a mile off our bow on a collision course with us. She had been watching it for a long time, slowly creeping up the lake gaining on us. But when sailing at night the lights can really play tricks on you. I could immediately identify it as a freighter, but she had been watching it for so long, trying to figure out what it was, that it just didn’t click until there was a fresh pair of eyes on it. We simply slowed the boat down and waited for it to pass. She told me she had been using the headlamp to try and freak out the captain and was giving him the whole disco dance floor routine so he probably thought we were some sort of floating dance platform.


Ana woke me up for good at 2 as she was getting real sleepy. I jumped up, threw on my clothes, grabbed my bunny hug and went out into the cockpit. Now for those of you who don’t speak Saskatchewanese a “bunny hug” is the proper term for a hooded sweatshirt. So just use that term from now on and we’ll all understand each other perfectly.


By now the nice full moon had set and it was black as pitch and we were so far out in the lake there were no longer many lights visible. The waves had built behind us so these big rollers were rocking the boat from side to side and up and down and everywhere around me was nothing but blackness. It was a little chilly so I threw on my bunny hug, but accidentally put it on backwards so the hood was over my face, which triggered a full-on panic attack. I think I was still sleep groggy because I wasn’t able to pull the hood down off my face so I was frantically trying to rip the whole damn thing off. Being head bagged on a rocky boat in the middle of a giant lake without any alcohol in your system is a terrifying state indeed and I had a freak-out in the cockpit, trying to peel the bunny hug off but it wouldn’t come so I just ended up thrashing around like a lunatic in a straight-jacket at the sanitarium.  Fortunately the rest of the family was not there to witness this odd display otherwise I probably would have been demoted from captain to jester.


I finally regained control of myself and got my bunny hug on the right way and felt much better. Bu t then, of course, the deep sleep that had eluded me in the comfortable, warm confines of the v-berth took hold of me when I was supposed to be on lookout. I did what I call the “Zombie watch” for about an hour where you sit in the cockpit with your eyes open, but are really only half awake, and probably fully sleeping at times. It’s the same feeling you experience at work on Monday mornings after a fantastic weekend. I decided I needed to do something to wake up so I went down in the cabin, washed my face, brushed my teeth, had a glass of water, but was just as tired as ever so I made the drastic decision to fire up the laptop and put on a B movie, a little trick that has worked for me many times in the past. So there I was, wrapped up in a blanket watching Dumb and Dumber at 3:30 in the morning in the middle of Lake Erie – wide awake! After that I tried watching that new Batman vs. Superman movie, but it made Dumb and Dumber look like a masterpiece. What is it with all those Batman movies? They are so goddamn stupid. They should have stopped after the first one.


Ana woke up around 6 and took over helm duties while I went back to bed and enjoyed a blissful four hours of sleep. By the time I woke up the kids were fed and lounging in the cockpit. The rollers had perhaps increased in size so the ride was a little choppy, but at least the waves were coming from behind us; if we were struggling against a direct headwind (which is usually what happens when travelling south-west on Lake Erie) the trip would have been downright miserable.


Because we knew we would be spending the entire day on the water we simply relaxed and passed the time by reading books, watching for boats (there were none) and the kids watched a movie, in an impromptu cockpit movie theatre created with two blankets, headphones and the laptop. After a while Magnus started to feel a little seasick so he popped a Dramamine and we bid him good night as he is usually sound asleep 30 minutes after taking one of those, and so it was today.  As he slept, Stella and I did some math practice, we played cards and I showed her how to do a few functions on the GPS chartplotter. Later, Ana and her did some fancy colouring while I went down below to do some writing.


Around 5 pm we decided it was time for the daily bath so we stopped the boat and jumped in for a nudie swim. The water was a glorious 27 degrees and we enjoyed a wonderfully refreshing dip. We didn’t linger too long, though, as the kids were anxious to get to Cedar Point, whose giant, sky piercing rollercoasters were already in view.


We pulled up to the gas dock at the Cedar Point Marina at 9pm, completing a 25 hour voyage covering 166 nautical miles with an average speed of 6.6 knots using up 19 gallons of diesel or about 0.7 gallons per hour. We checked in with US customs through the video phone, arranged for a slip, bought our park tickets for the next day and were soon tied up in our slip, conveniently located next to the main park entrance. We celebrated our arrival with an extra strong Malibu and pineapple juice that tasted heavenly.


We ran into some new friends who have a boat in Port Dover just a few slips down from us – they had also been assigned to the same transient dock as us, so we had a short visit with them. They have three little boys and as we were visiting on the dock the youngest lad started doing sit-ups and push-ups on the dock boards. His older brother said, “He doesn’t normally do that, I think he’s just trying to impress Stella.”
By 10:30 we were all in bed, happy that we’d finally arrived, and excited for what was sure to be a very busy day tomorrow.
Posted by Kristofor Olson at 8:02 AM