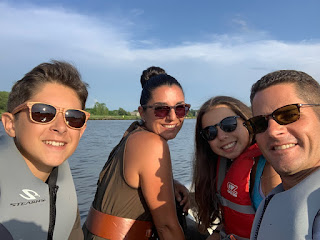 Our day begins at 2am - it is time to begin making our way back up the lake towards home and we’d like to do 75 miles today so we need an early start to arrive at our destination in time to pick up a few groceries we need for the rest of the trip.

While doing our pre-departure checks I notice that the green and red navigational lights on the bow have stopped working so I change the bulb and get them back online. Then as we’re leaving the dock the boat suddenly starts to swing and I realize the dingy we’re towing is still tied to the dock - amateur hour, or perhaps the brain is not yet functioning this early in the day. Luckily we avoid smashing into Geoff’s boat beside us and waking them up at sailboater hour, and are on our way.

Sailing in the dark is awesome..but a little weird. The idea of traveling throughout the night freaks out a lot of boaters, and I guess it does seem strange barreling your 15,000 pound boat through dark waters where you can see nothing ahead of you. That’s actually not true - you can see lights, and from a very far distance. So the trick with boating at night is being able to spot lights and recognize what you are looking at. Different types of boats have different rules for what sort of lights you need to show at night. For example, if you are on a medium sized sailboat under sail, you show red and green lights on the bow and a white light on the stern. If you are not sailing but instead using your engine, then you also need to show a white light at the top of your mast. Power boats are different too and show different lights depending on their size and type of vessel - for example fishing or towing vessels show different lights than a regular pleasure cruiser. The idea behind all these rules is allow a sailer to be able to identify the type of vessel and what direction it’s moving at nighttime based on the lights, so as to avoid a collision. But it is easier said than done, because most channel markers, buoys, and harbour entrances are also lighted, so distinguishing one from the other can be tricky.

As we are halfway through the Sandusky channel Ana points to a cluster of red, green and white lights in the distance and says, “What is that?”

“Not sure,” I reply. “Might be lights on the lighthouse at the end of the channel?”

At that moment the bow navigational lights on our boat stop working again. Then after a few minutes they come back. Then off again - likely a corroded connection. By now the lights ahead have moved so we know it is a ship coming in - probably a big one, but just as we realize that we are suddenly hit with a searing white spotlight in our faces, so bright we are temporarily blinded and it takes a moment to get our night vision back. This is the approaching ship trying to figure out what the hell we are, as they are surely confused with our navigational lights switching on and off. Most commercial vessels are equipped with powerful spotlights that can help them to see things at night, or blind a sailboater if so desired. Our nav lights fortunately blinked back on and allow us to safely pass by the big freighter, and I’m happy to get out of the channel and out into the open, traffic-free lake.

The ride is nice with a decent breeze our hindquarters, giving us a great push from the sails, but around 4am the skies begin to darken and we’re soon caught in a crazy lightening storm. But it is unlike the last lightning storm we were caught in as this is all sheet lightening bouncing from cloud to cloud, and not the fork lightening zapping down to earth-bound sailboat masts. But it is still scary as hell as the flashes are accompanied by torrential rain and strong wind. The storm comes in two waves and the whole thing lasts two or three hours, but finally passes and we are back to clear skies.

When the kids wake up we stop the boat for a morning swim and lake bath and then have campfire-style toast and cereal for breakfast. It is nice to finally have favourable winds so we get back underway quickly and arrive at the entrance to the Fairport harbour around 2pm. The long channel entrance, which leads to the Grand River, is bordered by a beach and town to the east and huge piles of aggregate to the west - gravel, rocks, coal, sand - waiting to be shipped out or in by freighter. I love the gritty, commercial aspect of some of the harbours on Lake Erie - signs of a still active industrial industry, but only a mere shadow of what it used to be during the heydays of the 20th century. The towns created by this industrial activity are usually themselves beaten down from the loss of businesses and jobs, and Fairport is no exception. After getting tied up in a slip in the Grand River Marina, which is the roughest of all marinas we’ve visited this trip - rotting dock boards, wobbly cleats, scary washrooms, deserted - we take a walk into town to look for a grocery store and a marine store to get some replacement bulbs, but I do not hold up much hope for that. 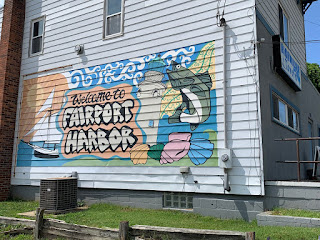 The walk is hot - damn hot - and we almost lose Tony as the threatens to return to the boat, but we blindly promise him that a cool lake swim is just minutes away. We finally reach the modest downtown core and, lo and behold, find a fully stocked, amazing marine store where I’m able to get bulbs, a kit of temporary navigational lights that can be used in the case of an emergency, or for a dingy, and we also decide to replace all of our docking lines with new ones. I could have spent another hour in there looking through all the stock, but the team is melting so we continue down to the lake and find a lovely park, beach and swimming area and take a dip in the cool water. The best part is the two huge nuclear cooling towers in the background, five miles away at the Perry Nuclear Power Plant, belching out huge clouds of vapour. But that’s not all we see. There is a man and his wife who have set up camp on the beach. The wife is sitting on a blanket and has lined up a bunch of spray bottles, that look to include glass cleaner and Armor All car polish. The heavily tanned, lizard skin man has stripped to the waist and sprayed himself with the Armor All to get that nice polished look, and is doing a little dance and spinning a frisbee on one finger. We’re not sure if he’s putting on a show for his wife, or for the the other beachgoers, or is maybe just enjoying life to the max in his own special way, but he is certainly having a lot of fun.

We begin our return walk, but stop along the way to check out a band that is setting up in the park, and one of the musicians tells us they are a Grateful Dead cover band and will be performing a free show from 6 pm to 9. There are no Deadheads among us, and I doubt anybody is going to want to do this hot walk again, but if nothing comes up in our schedule, perhaps we will return. Our next stop is at the grocery store/mini mart where we pick up a few things and then make our way back to the marina.

For dinner, we decide to head across the river to one of the two restaurants there - Pickle Bill’s or Brennan’s Fish House. We dub Magnus the evening’s DDD - Designated Dingy Driver, and he first motors Ana, Stella and I across the river and up to the public boat docks by Pickle Bill’s and drops us off then returns for Tony and Angela. We decide on Brennan’s as Angela was told by a local at the dock that you go for Brennan’s for food, but Pickle Bill’s if you want to drink. The meal is excellent, and we enjoy such a great time together talking, laughing, and reminiscing about the trip, which is nearing its end. Tony and Angela are such good friends, and amazing travel companions - which is very hard to find, so we are fortunate indeed. 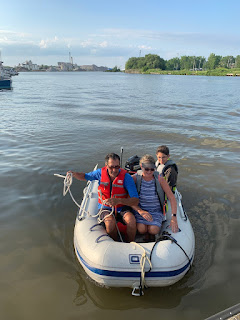 We are way too tired out by the quantity of food we consumed to even consider a drink at Pickle Bill’s, so we will have to save that for a future trip. Magnus and Stella dingy the Henriques back to the dock and then come back for us. As we push away, the two of them launch into the “Air Magnus” routine where they are acting as an airline pilot and and flight attendant, instructing us on “flight” times, lifejacket use, emergency procedures, and deplaning protocol. Hilarious!

We prep the boat for the final push back to Port Dover tomorrow. Even though it’s only Thursday, we decide that we’re ready to return home and if we leave by 4am we should be able to make the 100 mile run in about 15 hours and return to Paris Friday night which will give us the whole weekend at home to enjoy. Tony and I had planned for a final cigar and scotch, but everyone’s just too beat so we put that on hold for a future date and retire to our respective boats for a deep, Fairport sleep.
Posted by Kristofor Olson at 9:55 AM