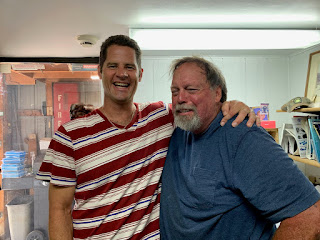 I am up before six and head down to the balcony of the marina office with my laptop to do some journal writing. It is cloudy today - the first clouds we’ve seen in Erie, but very warm and humid. Yesterday Rich told me we could expect the parts to arrive between 9 and 10, so I get the family rolling around 8:30 to ensure the mechanic doesn’t need to climb over two sweaty, teenaged bodies to get to the diesel engine. He would likely charge me more for that.

Over breakfast, Stella asks me, “Dad, what are the chances we’re getting out of here today?”

“Lots of things could go wrong. The part might not arrive. They might send the wrong part. The mechanic could get sick. Something else on the engine could break when he’s changing the part. He might find other issues with the engine. It’s not a sure thing.” She was intensely dissatisfied with that answer - as was Ana, but just trying to set expectations.

After breakfast I walk over to the marine shop, and as I’m looking around for Rich a UPS van pulls up with a package from New Jersey - YES! Odds just went up to 60 - 40. Rich makes it over to Bella Blue by around 10:30 and gets to work. We end up going back to his shop a couple of times, because of what he calls the “Hiroshima Revenge”. My engine is a Japanese built Yanmar, and Rick says that whenever he has to repair a Japanese built component, it all goes remarkably well until you get to that one thing. The Japanese design philosophy is to always insert a single component that is practically impossible to access, tighten, loosen, wedge, align, connect, calibrate, or otherwise repair. It’s a long term revenge thing, nothing personal.

Rich finishes the repair, Ana fires up the engine, but there’s no water coming out of the exhaust. It must be the impeller, so I remove the cap and find all of the blades except one have broken off, maybe because of running the motor hot and dry through the channel? I replace the impeller, we fire the engine and she purrs like a sweet kitty, YAY! Odds are way up to 80 - 20. Ana is positively beaming and the whole family tries to do a Ring Around The Rosie happy dance with Rich, but the dock is too small and we all nearly fall off. He truly is the hero of the day. I grab all the cash we have and return with him to his office to pay up. He adds everything together - $110 for shipping, $250 for the parts, and then just two hours of labor and the total is $600. As I’m counting out the cash Rich says, “Oh man, I’m so sorry - hope I didn’t clean you out.” What kind of mechanic is this guy? Friendly, competent, honest, kind, and a truth teller? I feel a new bromance coming on. I had his assistant take a picture of us together, which I will frame and hang in our living room, because when do you ever have a photo of yourself smiling wildly while handing $600 cash over to a mechanic?

After a pump out and diesel top up, we are on our way steaming out of the harbour and I tell Stella the odds have gone way up to 90 - 10. The only thing that can stop us know is some other sort of catastrophic failure in the channel, but we clear it with no problems. As we round Presque Isle and get into the main lake, Ana suggests the kids celebrate with a rotten banana throwing contest, and hands them two blackened bananas she pulled from the bottom of the fruit and veggie basket. The kids wind up and Stella flings her banana at least twenty feet from the boat, but Magnus’s breaks up and just topples into the water. 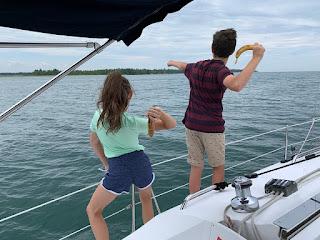 Vermillion lies 118 miles to the southeast and we are so ready for the trip even though we are looking at a 20 hour run. The wind is, of course, directly in our face, so we are on motor power only. The water is a little choppy at first but after a few hours, the lake lies down and becomes
calm and completely waveless, which would make for a gorgeous ride except for the biting flies, which are back with a vengeance. So we engage the Portuguese basura broom once again and murder every flying creature in sight.

Due to the extended nature of this trip, I decide it is the perfect time for a Led Zeppelin fest. Back in university I used to get together with a few buddies once or twice a year to listen to the entire Led Zeppelin four cd boxed set and drink rye and cokes. It usually ended in some sort of facial injury, criminal charge, bar fight, tummy upset, and sometimes all of those things. It was a real hoot. But today’s Led Zeppelin fest was much less prone to injury and I must say I loved every single song, as did Ana, until we got to the fourth cd which has their later stuff - all masterpieces - but a little tougher to get through.

Early in the run Ana’s sharp eye spots a balloon, off to the north a hundred metres. “Man overboard!” she shouts to the kids below to grab their attention. I crank the wheel, Stella points to the balloon, Magnus readies the boat hook, and Ana guides the way. Magnus snags it on his first attempt and this one is a real prize - an extra jumbo foil balloon that has a device that sings to you! Of course it no longer works, and the balloon is mostly flat, but a worthy prize nonetheless. 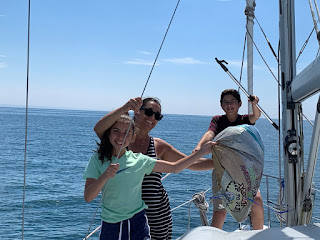 The day goes by quickly and as we monitoring the weather we hear of thunderstorm warnings in western Lake Erie, which is hard to imagine considering our current sunny skies and glass calm lake surface. But to be safe I periodically note down our position, speed and time just in case we get hit by lightning, which usually blows out all of the boat’s electronics. Around 8:00 pm we can see darker skies to the west and then around 9:00 a squall warning rings out on Ana’s phone advising boaters in our area to seek immediate shelter. We have just passed Geneva-On-The-Lake, a place we have visited before that has a well sheltered harbour, so I turn the boat around, push the throttle to maximum, and straight-line it the three miles into shore. The wind is building rapidly and we can see bolts of lightning in the black clouds that are swirling around and bearing down on us. We see two powerboats tearing across the shoreline, headed for harbour. Bella Blue is motoring as fast as she will go, but the squall line is gaining on us, and there is nothing we can do to speed up. Now the rain starts and pounds the boat, and us, reducing visibility. A bolt of lightning hits shore a few miles away and the sound of thunder fills the air. Ana tells the kids to get away from the aluminum mast support inside the boat, and hide in the back cabin, which scares them, but better to be safe. We are getting closer and closer to the harbour entrance. One mile, half a mile, quarter mile, and then we are in, but the storm is right on top of us now and the wind is howling. I pilot the boat into the marina, relying on the digital chart plotter since the visibility and light are both gone. Fortunately the break wall is clear of boats so I pull Bella Blue up to the wall and Ana jumps off and cleats down both lines. We are safe. 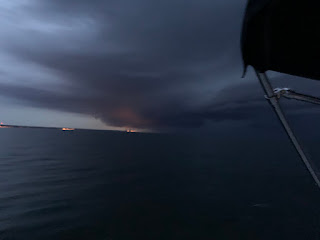 Posted by Kristofor Olson at 5:31 PM