Admiralty Islands to the Brock Group 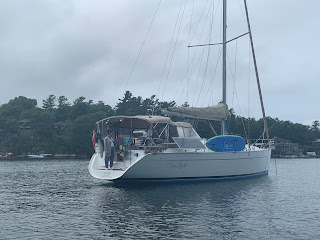 Tony, Stella, and I began the day with a swim and a snorkeling expedition while the ladies enjoyed morning coffee in the cockpit. The water temperature was chilly, but once past the shock of the initial plunge it was manageable. Stella and I dove down and founds dozens of perch cruising around in the weeds, and even a few small bass.

Some of the boats from the previous evening had already departed and they continued gliding out of the anchorage, one by one, likely to lock in a premium spot at their next anchorage. We were less ambitious and instead took our time, made sauage and eggs for breakfast, and planned our our next destination. We decided to make the 35 nautical mile run to Brockville, which is the eastern end of the Thousand Islands and as far east as we would go on this trip, then we could slowly make our way back westward. I was quite excited as we did not make it that far on our previous visit to this area three years ago.

I fired up the engine while Tony and Ana went to the bow of the boat and retrieved not just the anchor, but four hundred additional pounds of mud and weeds. With the help of the boat hook, some unbelievable yoga power stretches, the windlass to dip the anchor and and out of the water, and massive muscle power, they managed to liberate the bottom growth from the anchor and we were on our way.

Navigation in the Thousand Islands requires good charts and 100% attention from the helmsman as there are hazards everywhere: rocks, reefs, nets, kite surfers, sea-doos, buoys, overhead power lines, strong currents, inattentive boaters and most importantly, the US border which weaves unpredictably aorund the islands and currently restricted due to Covid. SeaLight has an excellent navigation system with fairly up to date SeaRay instruments, but we also keep backup navigation software on our phones and iPad just in case of failure. What we don’t have are the full set of paper charts for the area, which we should, but honestly they are expensive, bulky, and rarely used.

SeaLight threaded and weaved her way following the small craft route passing hundreds of islands and hundreds of other boats along the way. The afternoon sunshine beat down and we enjoyed the best weather of the trip so most of the crew were sprawled out on the deck in swimsuits drinking fruity beverages.

We arrived to the Brock Group of islands after a 5 hour sail and began looking for a suitable anchorage. Ana had called the Brockville marina along the way and learned that our timing for this trip was rather bad. You see, since 1971 the province of Quebec has celebrated the “Construction Holiday” which is a two week period from the second last Sunday of July where everybody in the construction industry drops tools and goes on vacation. Only in Quebec would they halt construction right in the middle of the best season for building so that the brutish concrete workers can get their Speedos on and take up every damn marina spot for hundreds of miles around La Belle Province. It’s good to be a Quebeccer.

After a failed anchoring attempted in brisk current between De Rottenburg and Black Charlie islands, we continued eastward throught the island group looking for a better anchorage. As we were motoring down the Brockville Narrows a giant frieghter caught up to us and passed by, displacing an enormous mountain of water as it went. Surprisingly, these beheamoths leave very little wake – less than a Sea-doo so they pose no danger. Unless, of course, you are in their path and they run into you, something we experimented with on last year’s trip but did not much enjoy it. So we stayed clear.

We found a delightful little anchorage between Smith Island and the mainland so we dropped the hook, then had a short chill out session in our cabins before meeting up in the cockpit in preparation for a planned swim. Somebody noticed that Tony was no longer on the boat, so after a cursory search we theorized that he must have fallen off the boat somewhere along the way. We each took turns telling our favourite Tony story and there were many “he was a good man”, “such a gentle soul”, “would give you the shirt off his back”, and similar generous comments in his memory. As we were raising our glasses for a toast, he appeared just off the port side of the boat on the paddleboard, so we quickly lowered our glasses and pretended like nothing had happened. It was good to have him back. 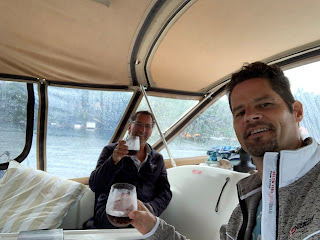 I jumping in and went for a deliciously long snorkeling expedition. The water here was cool, incredibly clear, and had a variety of bottom conditions from thick weeds, to rocky drop-offs, to long stretches of rocky plates. I saw a number of perch and small bass, then at one point I spotted what I first thought was a northern pike cruising the weed beds, but as I got closer I realized it was probably a muskie. First, it was a little more grey than a pike, and looked a lot meaner, then it immediately took off as soon as it saw me – usually pike don’t mind you trailing them around in the water for a while.

The beautiful afternoon sunshine disappeared and the overcast skies started dumping rain as I was near the end of my swim, so after I was out and changed back into clothes, I joined the others in the cockpit for happy hour. Ana heated up the chili we had made in advance of the trip and also re-warmed up the sheppards pie we had overcooked for lunch, leaving a black, grisly bottom coat that made it almost inedible. Almost.

Two scouting missing were sent out in the dingy – first Angela and Tony, then Ana, Stella and I. The three of us went right into Brockville, and did a quick tour around the marina and confirmed that it was indeed jam packed full of Quebec boats, sacre bleu! We also learned that the slightest chop on the water dumps the tops of waves right into the little dingy, so it really is a two person vessel and not ideal for us, but it would have to do for this season as the currently overpowered boat market was making it very difficult to find anything decent.

The day concluded with us all in the cockpit, deep in convo, wearing sweaters becuase the temperature had plummeted. It did not feel much like July but the whole summer had been much cooler and wetter then normal. C’est la vie.

Posted by Kristofor Olson at 8:21 AM