Back to the Kingston Mansion 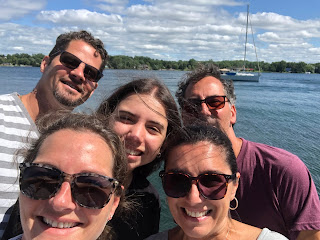 The day was cool and clear so after breakfast we all paddled into Leek Island to take a leak, I mean a look. It is not a large island – we walked across it for five or ten minutes and popped out onto a broad beach with large flat rocks, onto which all five of us collapsed with exhaustion.

“It’s great to get some intense exercise,” said Ana as we all layed there like walruses after a seafood smorgasbord. We all agreed, then our thoughts wandered to what was on the docket for lunch. Sailors are not the most physically active folks in the world.

We returned to SeaLight, had a round of morning showers and baths, then said goodbye to Leek Island and its many minks then got underway. Angela cued up one of the awesome playlists she had cureated for the trip and the music rang out joyfully as we sailed our way back to Andrew’s place, passing by the Admiralty Islands then navigating back through the Bateau Channel. Unfortunately the wind was right in our face most of the time so we had to motor nearly the entire way.

Sadly this was our final day with the Henriques and the end of phase 1 of the sailing trip. After arriving back in Kingston and anchoring in front of Andrew’s house we lounged around the boat for a while, had some food, then the Henriques organized their things and we ferried ourselves into shore. We said our final goodbyes then Angela and Tony took off back towards civilization. It’s always sad parting after a trip, but we know the next adventure with the Henriques is never far away.

While waiting for Andrew and Victoria to return from work we gave the boat an interior cleaning, an exterior wash, and got the cabin ready for our next guest – Magnus! He was scheduled to arrive around 7 or 8 pm and was catching a ride from Brantford with a colleague of mine who was driving to Ottawa for the weekend. In addition, my brother Marty and his family would be arriving tomorrow to spend the August long weekend with us and Andrew.

I borrowed Andrew’s truck to pick up Magnus from the drop-off point at the Husky gas station on the 401 highway, just a ten minute drive away. My colleague arrived in a mini van and when the door opened a small army emerged – parents, kids, Magnus, and a rather large dog. I had a quick visit with my colleague then we let them get on their way as they still had a couple of hours left to get to Ottawa. Magnus and I caught up on the week’s events as we drove back to Andrew’s. It was great to have him back with us.

Another Friday night meant another neighbourhood party at Andrew’s! Bob, Terri, Jan, and Don all arrived and we enjoyed more than a couple of drinks as we visited and goofed around. I discovered why Andrew’s dog Emma is always after the can of beer I am generally holding. Throughout the evening when nobody was looking, or especially if they were, Bob would call Emma over and pour Coors Light into her mouth which she lapped up greedily. I don’t know if it’s even possible to become an alcoholic drinking Coors Light, but if so the dog was definitely ready for an ADA meeting (Alcoholic Dogs Anonymous).

Posted by Kristofor Olson at 7:13 AM