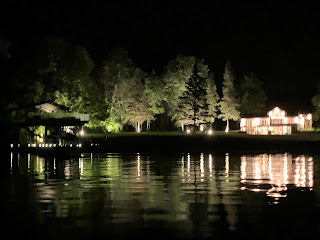 It has become clear that the greatest feature of our new boat versus the old one is the gloriously large and covered cockpit. Our old boat Bella Blue had a modest bimini cover over the cockpit, but not a dodger (which covers the front) nor side panels so when the weather got bad, you were putting on foul weather gear and getting splashed in the face. When the bugs got bad you were swinging the basura wildly and constantly cleaning the cockpit out with buckets of water to rinse out the insect corpses. And when it was cold outside you would freeze at the helm.

SeaLight has a full cockpit enclosure so it remains warm, cozy, clean, and bug-free. While the visibility without a cockpit cover is superior, you can still see quite well through the transparent plastic panes, but to be sure you can just unzipper one of them and stick your head out every once in a while to scan the water for other boats. But this comfort comes at a cost – remaining conscious during the overnight shift becomes exceedingly difficult. On Bella Blue, it was easy staying awake as you were either shivering uncontrollably or batting bugs or usually both. Plus you were standing up most of the time and wearing a bulky, uncomfortable lifejacket tethered to the helm to prevent yourself from an accidental fall off the boat. On Sealight it was all decorator pillows, prone position, salty snacks, and cozy, sleep-inducing temperatures so despite both of us remaining in the cockpit for most of the evening, there were times when we drifted off to la-la land while the boat steamed on.

Fortunately there was literally nobody else on the lake. Besides two far away freighters we could barely see across the lake, we did not see a single other boat until we had been on the water for 15 hours and were approaching Kingston. The wind finally picked up in the morning so we deployed the sails and enjoyed some engine free sailing. After breakfast I advised the ladies to shield their eyes while I engaged in a chilly bucket and sponge bath on the swim platform so that we wouldn’t have to pull the sails in and stop the boat.

This was the first trip where we were a crew of three instead of four. Magnus had scored a summer job as a camp councillor with the City of Brantford, and was also working weekend shifts at a local grocery store so he was unable to join us, although we had worked out a plan for us to come make it out during the two weekends which our trip would cover, so we were looking forward to seeing him then.

We arrived at our friend Andrew’s waterfront house late in the afternoon and despite his previous measurements of water depth at his dock being well under the required amount for our boat, we decided to give it the old college try anyway.  I pointed the bow of SeaLight towards shore and we tenderly powered ahead, watching the depth gauge. 10 feet. 9 feet. 8 feet. 7 feet.

“Good so far!” I yelled to Ana on the bow and Andrew on the dock.

6 feet. Then a sudden stop as the keel hit an immovable rock.

“Whoops, that’s it, out of water. Sorry about that blue bottom paint on your rock!” I hollered as I punched it into reverse and backed out. We didn’t get too close but it was worth a try.

Because the southerly wind was picking up we decided to anchor across the channel in a bay that was well sheltered instead of trying to anchor off the lee shore – never a good idea. We dropped anchor and stuck it right away, which was a nice change from Bella Blue where anchoring was always tricky and the Delta and Danforth anchors she had just didn’t work nearly as well as the Rocna type one on SeaLIght. We gathered up our things, deployed the dingy, then the three of us hopped in and motored back across the channel to the dock, tied up, and joined the rather large gang of people on Andrew’s upper dock deck – neighbours, family, dogs. We were already well acquainted with all of them so we exchanged greetings and salutations then got to work on the Bud Lights stacked up in the fridge. It was nice to be back on land after a long ride, and to enjoy the company of these fine folks. Andrew and Victoria’s newish puppy Emma made us feel especially welcome by dashing into the water to get fully soaked, then returning to the upper deck to stand in front of each of us in turn and doing the doggy shake to unleash 8 litres of hairy water directly into our laps and faces. The misting actually felt quite nice. 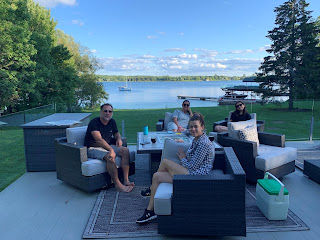 As afternoon slipped into evening, the horde migrated to Andrew’s house, ordered up a mess of pizza and poutine then stuffed our faces and got into the Guiness and red wine. We were feeling buzzy and comfortable, but Andrew’s neighbour Bob was not, as he could simply not believe that we had left our boat anchored across the bay on its own. So he would get up every few minutes and walk to the patio door to ensure he could still see the mast light, and that it appeared to be coming from approximately the same location.

It must have been near midnight when we decided it was time to dingy back to the boat. So we walked down to the dock, accompanies by the hard core partiers, and discovered the wind speed had doubled or tripled and there were huge whitecaps bashing up against the dock. There was no way our little dingy was going to get us back to the boat; in fact it likely wouldn’t have gotten us to the end of the dock without being swamped. So Andrew and Victoria invited us back in to stay at the house, which is quite a privilege as the neighbours confirmed he refuses to let anybody sleep in his amazing lower level, complete with three fully furnished bedrooms, a full kitchen, popcorn machine, giant ship’s wheel, video game system, 9 sprayer shower system, hot tub, wonderfully folded towels, an excellent smell, and fully stocked fridges. Why does he let us? I think it’s mainly because of Stella. He was pretty much her first friend and she’s had him wrapped around her finger ever since.

Posted by Kristofor Olson at 5:03 PM