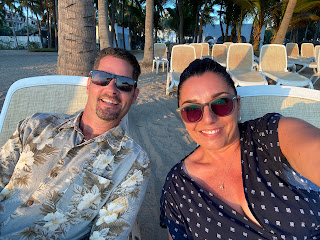 It was the final morning meeting for Walking Club. I had a slight bit of fog in the brain from the excesses the night before so the fresh ocean air helped as I walked south along the beach. But something was very different today. Thousands of fish were inexplicably beaching themselves and flopping around. They were fairly small, mostly between 8 and 12 inches, and I had no idea what was going on. I’d flip them back into the water, but they would swim around haphazardly then rocket right back up onto the beach and start thrashing around. Most of them were still alive but many were dead. I saw one Mexican man who had a big bag and was walking down the beach picking them up and tossing them in. That’s easy fishing.

Ana and I made breakfast last as long as possible, enjoying the beautiful warmth, the sun, the fresh moist air, and the Pacific breeze. We checked out of our room in time to catch our 11am taxi to the airport. And the rest of the day? Well, let’s just say that before long we were once again cruising down the 401 highway, fighting traffic, trying to keep warm, but very much looking forward to seeing our kids after a most satisfying week away.

Posted by Kristofor Olson at 1:12 PM