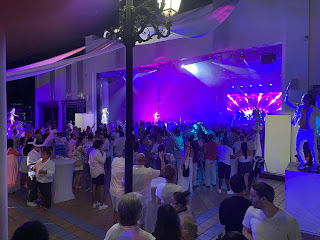 We had a nice sleep in and long breakfast then walked south on the cycling path all the way to the shopping mall where we bought a bottle of that famous Mexican vanilla and some small presents for the kids then then enjoyed a coffee before taking a bus back to the resort. After 20 years of marriage Ana and I still haven’t run out of things to talk about and we’d found that being on our own without the kids was an exercise in bliss. No arguing, no negotiating, no unexplainable crankiness. We do love all the amazing trips we’ve done with the kids but did recognize the risk that once the kids were no longer there, we might struggle to be on our own. No such thing. I felt like we were able to pick things up right where we left off nearly 18 years ago as a team of two, but with a bit more grey hair, a few more wrinkles, and hopefully a touch of wisdom.

Something was different in the resort today. The staff were busy building a new bar and reconfiguring the theatre area for the weekly “White Party” which we had seen signs for in the lobby. What we didn’t realize was that this party was open to guests of the other two Riu hotel resorts as well. By the time we finished our long and leisurely dinner at the Italian themed restaurant, busloads of people dressed in white started arriving and once darkness fell the show came to life. 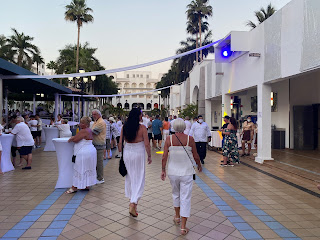 A DJ began feeding his stream into the massive sound system and the rumbling bass shook the ground. Male and female dancers appeared on stage, all dressed in scanty white costumes, and started shaking it. Ana and I were standing at one of the three bars watching the scene unfold. What was out of place was the crowd; instead of 20 year old techno-ravers there were families, middle aged couples, and groups of 40-something friends, some of whom may have remembered their own clubbing days, and others who were perhaps experiencing this for the first time. Many just stood there, confused, unsure of how to react. Others let the music take over their bodies.

The party escalated. Stage dancers were sent out into the crowd to fluff up the fogies and get them moving. The volume spiraled. The graphics playing on the screen behind the stage intensified. All at once the dancers scurried and jumped one each on top of the giant boxes which had been strategically places all around the exterior of the space. Cage dancers without the cage. Gyrating, sexy beasts surrounding us everywhere. From the edge of the frenzy a robot appeared and started moving throughout the crowd, dancing robotically and slapping high fives. Two acrobats climbed onto a trapeze and began swinging and spinning wildly. A thousand white balloons were released into the crowd. The music pulsated, the crowd heaved, Ana and I danced. It was an unexpected and crazy end to an incredible week.

Posted by Kristofor Olson at 1:01 PM