Mexico - Sayulita, the Ultimate Burger, and Bragtiming my Brother 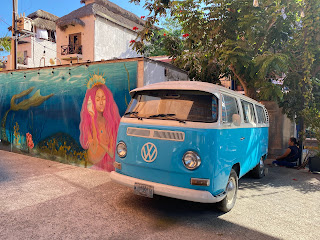 During my long early morning beach walk I did something I haven’t done for a very long while – practiced my Pakistani squat, which I learned while living in Karachi in the 90’s. It looks deceivingly simple. You plant both feet on the ground then bend your knees and crouch down with a straight back until your butt is nearly touching the ground, then stick your hands straight out in front of you to provide the required counter balance to avoid falling backwards. Pakistanis can sit like this for hours. Sometimes you’d see a whole line of men doing this, appearing much like crows on a powerline. It is a great resting position and is much better than sitting on the usually filthy ground. But it seemed in my advancing age, my muscles and tendons aren’t quite as stretchy as they used to be as I was unable to keep my feet flat on the sand and had to sort of roll onto the balls of my feet. Once in position, I was able to hold it for a while but I’m going to need a lot more practice.

After our morning feeding we jumped in a taxi and told him to take us to Sayulita, about 30 kilometers northward, and a 350 peso ride (about $22 Canadian). My brother Curtis and his family had spent a month in Sayulita on two occasions about ten years before and they absolutely loved it so we couldn’t pass up a chance to visit.

We loved it right way. It felt like any of a number of gritty backpacker towns we’ve visited in the past – skinny streets, some dirt roads, densely packed shops, groovy restaurants and coffee shops, and dreadlocked beach hippies walking around barefoot. The beach was nice and packed with restaurants and beach chair for rent, as well as surfboards for hire as there was a modest beach break providing ridable waves.

We found a place for coffee and grabbed a table on the patio, which was really just part of the street. Despite the backpacker look and feel, the prices on the board didn’t quite match up with expectations; everything was expensive. Coffees for five bucks, smoothies for eight, breakfasts for fifteen to twenty. Seems things have changed a bit since Ana and I have been on the backpacker trail, but it made sense. The more popular places get, the more expensive things become, and in these days of loose and easy money, higher prices should be no surprise.

I did truly enjoy our coffee date. All I did was watch the traffic go by as Ana and I chatted. Here comes a huge Sprinter van, I wonder how he’s going to squeeze through? Then a pack of people on bikes. Next, a brand new BMW. Then a noisy and muddy quad, followed closely by a side-by-side. A series of cars and utility trucks passed by, spewing fumes, then a larger tourist bus (oh, oh), followed by a platoon of electric golf carts. A few taxis passed, then a man came walking through guiding a wheelbarrow full of candy for sale. The only vehicles I didn’t see were a donkey cart and a Batmobile. 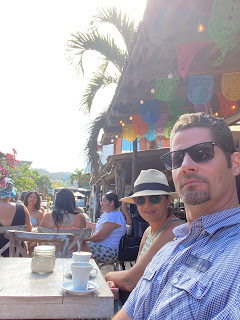 Leaving the coffee shop, we explored many streets and I found a barber shop, but wasn’t able to walk in so signed up for an appointment one hour hence. Ana and I split up – she hit the clothing stores while I hit the convenience store and bought a nice old Corona which I enjoyed sitting in the park and watched people while I waited for my appointment. A local lady came by and dug through a large garbage can, extracting cans and bottles, singing to herself, and me in proximity. A street dog passed by, looked at me briefly and nodded, then got back to his business. A loud American dude wearing a Bud Light singlet and stars and stripes shorts entertained two lady friends with shots and beers in a bar across the street. Traffic volume increased rapidly with many tourist busses dropping off loads of fresh consumers eager for aimless wandering. My appointment time came, so I went in and got a haircut. A long haircut. Perhaps the longest I’ve ever had. The boy with the scissors spent what felt like hours with clippers on the sides and back of my head, going over and over the same spots. I asked him to cut about half off the top but he was reluctant to, and just snipped off a millimeter or two, then got back to trimming the sides. I was finally released back into the wild with a mediocre cut and Ana was waiting for me in the park. If the streets were busy before, then were chaotic now. Tourists everywhere. Diesel and gas fumes. Congestion.

We decided to skip Sayulita lunch tacos and instead found a taxi back to the hotel, slightly disappointed with afternoon Sayulita; we preferred her morning face. 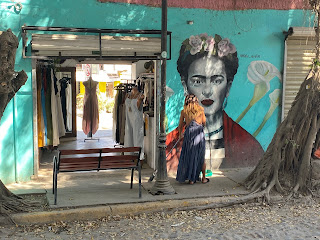 Back at the hotel we had an amazing long lunch at the beachside restaurant, where I crafted the ultimate hamburger – jalapenos, mayo, lettuce and tomato, salsa, cheese slices, olives, onions, all washed down with cool glasses of red wine. We then set up on beach loungers and read books, listened to music, swam, watched a huge iguana scale a palm tree and, best of all, gave my brother a Facetime call to tell him we had finally visited Sayulita. As he was connecting I noticed my happy sunstained face was framed in by palm trees and a blue sky as I leaned back on my lounger and had a sip of my beer. As Curt came into view, I could see he was sitting at a desk, likely looking an Excel spreadsheet, in a dark room, probably with snow blowing around outside. And you know what he did? He gave me the finger! Can you believe it? He just flipped me the bird and didn’t say anything. Then it occurred to me – he thought I was Bragtiming him, which I suppose I was but didn’t think too much of it. Once he got over the shock of my unusual glee, we had a nice chat about Sayulita and Mexico. But before too long, my beer was empty and I had to go get another free one while he just had to get back to his Excel spreadsheet so we parted virtual ways and I think he may have given me the finger one last time as his image faded from view.
Posted by Kristofor Olson at 6:56 AM