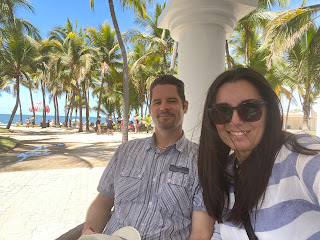 Our room's sleeping situation was of the Fred and Wilma Flintstone variety – two separate beds, but these were pushed together to create one gigantic bed with a big crack down the middle you had to navigate around as you slept. But there were no kids squeezing into the bed, or sleeping on a cot, or staying in an adjoining room. The difference was striking.

In the large bathroom/grooming room there was a sizeable mini-fridge which had been stocked full of cans of beer, water, and mixers. Why would you need mixers? Well, for the spirits box, of course. On the wall hung a cabinet with four litres of booze – tequila, rum, vodka, and gin – turned upside down and connected to shot dispensers. A little sign hung below the cabinet – “Proudly Sponsored by your Local AA Chapter.”

Breakfast offered a hundred options, but I went with the scrambled eggs on a freshly baked bagel with salsa dumped on top, then on the side were a few sausages, pile of hash browns and a bunch of papaya wedges jammed in the available spaces. Ana had a big fruit plate, toast, and eggs. Two little kids I saw at the buffet each had a plate containing no less than four doughnuts, with chocolate sauce scooped on top. Their smiles spread from ear to ear.

Our friends Tony and Angela Henrique were also in Mexico and staying in a condo complex called Playa Royale also in Nuevo Vallarta, but we weren’t sure how far away it was so we took a taxi. I could tell vacation mode had already set in because we forgot to ask them what room they were staying in and hadn’t exactly decided up on a time to meet – unheard of omissions in our regular life of times, scheduled, deadlines, and pressure. When the security guards at the property gate refused to let us in we went for a walk instead and found a small shopping mall with a Starbucks. One of the things I like least in life is hanging around shopping malls, but when they are located in a different country that changes things, as it’s a chance to see locals and absorb a bit of the culture. I went right to the supermarket to browse around and ended up buying a fine set of swimming goggles while Ana visited many of the other stores. Prices were generally comparable to Canada and there were no deals to be had.

Just to prove that vacation scheduling is completely unnecessary, Angela and Tony found us sitting outside of Starbucks having a coffee. We hadn’t seen them for several months as they had been on an RV cruising around the southern US, so were already brown and relaxed. They had just returned from playing pickleball – a sport I’ve recently learned about but have not yet experienced. It’s been described to me as a retiree version of tennis but since I’m not yet retired and am still in my 40’s (not for long) I will choose to avoid this sport for now. Also, I’m a firm believer that the morning “pickle tickle” should be something that happens in a bedroom and not on a tennis court. We’ll see what happens when I turn 50.

They invited us up to their 6th floor apartment and we enjoyed a cold beer on the balcony while enjoying the remarkable view over the grounds and the Pacific Ocean. They are often able to see whales in the bay, but the season for them was coming to a close so there had been fewer sightings. Our friends led us downstairs and out to the beach restaurant where we had a nice slow lunch and great chat. We had really missed them this winter and it was great to finally catch up with them again. During lunch we told them all about this Youtube channel we’d been watching with a couple who were sailing their 40’ Beneteau sailboat from Norway all the way down the cost of Europe then across the Atlantic to the Caribbean, then later would be continuing through the Panama Canal and across the Pacific to New Zealand. Previously Ana was not interested in taking our boat across the Atlantic, but after seeing this couple in action with little more experience than we have, she had warmed to the idea and right there announced confidently, “We can do it!” Music to my ears.

After lunch we headed to the pool and found half of Brantford there. Brantfordians seem to travel in packs and we had a lovely time drinking happy hour margaritas with them. I also tried out my new goggles and did a few laps in the pool until that got boring then went back to happy hour for round 2.

By late afternoon we found ourselves back on the street waiting for a local bus or collectivo to get back to our hotel. After half a dozen of them stopped, but none of them were going our way, we grabbed a taxi back. I didn’t actually mind waiting as it brought me back to the days when we did not have computers in our pockets that could tell us everything all the time and sometimes you just had to wait and not know. Or talk to people. Or take a chance.

We had dinner at the Mexican themed restaurant and it was amazing. We again dressed up for dinner and got a lovely table for two where we enjoyed an excessively slow meal as we talked, watched people, then talked some more. There was a family with two beautiful little girls who resembled our nieces so we talked about them a lot and missed them. Ana and I discussed all kinds of things and I felt overwhelmingly happy that we were here on our own, with so much time, and nobody to take care of or be worried about except ourselves. Selfish, maybe. But that’s okay.

Posted by Kristofor Olson at 6:40 AM