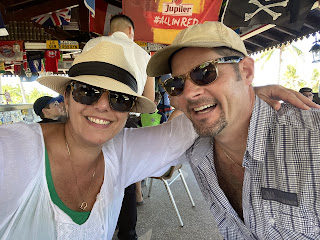 Sunday. Last day. The bus was not scheduled to pick us up until 5:30 so we had nearly a full day left. It was again a clear, sunny, and hot day with a nice south-east wind blowing. The daytime temperature has been a consistent 30 all week, with it dropping to 22 at nights so we couldn’t have asked for anything better.

At breakfast I chopped up the mango and we all tried it out – absolutely delicious and incredibly sweet considering mangos weren’t even in season yet. Magnus hadn’t joined us for too many early meals, preferring to sleep in and come on his own later, but we all ate together today for our final breakfast. As we were eating we decided that we would each take $50 and give it to one of the resort staff members. During these trips there are always a few of the staff who you tend to make a connection with so it wasn’t hard to find recipients.

After a day lounging mainly at the beach we returned to the room, packed our things, put on our jeans and shirts, carried our jackets, and started upon the Walk of Shame. Fortunately, we were able to order up a golf cart to help us with our luggage, so the Walk of Shame was replaced with a Ride of Shame, and this was much faster and less shameful than trudging up the concrete pathways getting boiled as your drag your roller bags and pass everybody else going the other direction in beach wear with beers in their hands.

The trip home was awful. Our bus arrived an hour and a half late. When we finally arrived at the Holguin airport it was utter chaos – there were so many people there that the line to check in extended right outside the terminal and snaked around the building. There were at least four or maybe more flights leaving at the same time. After a torturous wait we finally got checked in, through security, and into the gate area which was also jammed, but we managed to board fairly quickly. The flight was further delayed with a slow manifest and other problems so I don’t even know what time we left. We pulled up to the gate in Hamilton airport at 2:50am and were rifled quickly through security into the baggage area. There we waited. And waited. Some people fell asleep on the floor. Others against a wall. After an hour and forty-five minutes the bags finally started coming out to massive groans of relief from the gathered crowd. Our bags were nearly last to come out, and by the time we loaded up the van, dropped the Borges folks at their house in Brantford, and drove to Paris, it was 5:30 am and work and school was just a few hours away.

But I’m not complaining. At least we made it there and back, which cannot be said for so many people this Christmas whose flights and plans were cancelled because of the terrible weather.

This was our first family trip with Ana's folks since we last took them to Cuba exactly three years ago, to Holguin, but in a different resort, fortunately right before the Covid pandemic began. As they rapidly wind down their 70's and approach a new decade, we are trying to spend as much time as possible with them and invite them on vacations, as it won't belong before it just won't be feasible for them anymore because of spiraling travel insurance costs and general mobility issues. Because of the size of the resort, we all walked a lot, and they did well, but it was tough on them some days, and I think being out of your home comfort zone probably gets a lot harder as you age. We had a lot of fun with them and are very happy they joined us, and I think they had fun too, especially spending time on the beach and in the water and hanging out in the lobby playing cards for hours. It is particularly nice that our kids got to spend extended amounts of time with them as that doesn't often happen much anymore during this busy time in their young lives. I know we will all look back and appreciate these trips and the fun we had together.

Posted by Kristofor Olson at 6:58 AM