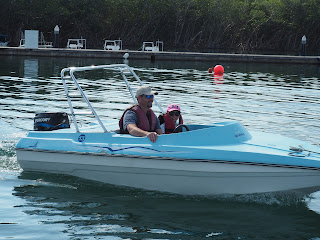 Back in Canada, Loretta had found us a great deal on a day trip driving these cool little speedboats. Since the tour left today at 9 I got up earlier for a quick walk and bumped into Angie on the beach. She had been getting up way earlier than Walking Club every day so we walked for a short while, had a great chat, and then headed back up to the restaurant to meet everybody for a fast breakfast.

The bus picked us up on time and we stopped at three other resorts before continuing onto the marina. After filling out a short waiver we were lead to the boats which were these little two seater models with a 25 hp outboard engine powering them. The Cubans fired up the engines and assigned us to a boat; Stella and I rode together and the others all teamed up with the exception of Marty who got his own boat since he was the odd man out. We followed the guide out of the harbour and soon we were zipping along at full power doing long broad sweeps across the bay. We drove out to a huge, grounded ship that that guide had told us was carrying molasses. As we neared the boat we were hit with a horrible, sickly sweet stink coming off the boat, no doubt from the thousands of gallons of decaying molasses. What a waste, think of all the rum that could have been made with it.

From here we continued to some narrow channels through the mangroves. At some point Marty's boat died so the leader gave Marty his super charged boat while he fixed up the dead one. But Marty got stuck behind a slow lady so the other guide gave Marty the thumbs up to pass her, and after passing her he passed everybody and was headed for the lead until the guide gave him the "throat slash" gesture to cool his rockets. At times like this we say the "old Marty" is back. You see, beneath that absolutely phoney Bank of Canada, economist, responsible father persona is a wild man. And when the wild man comes out, watch out!

We made it back to the marina with no problems (besides inhaling a lot of nasty outboard engine gasoline fumes, which gave a few of us headaches and sore throats) and they loaded us up on a large boat for the second half of the trip - snorkelling. We took a very short ride just out into the bay, and along the way I took the opportunity to sit beside Leif and crack every single one of his toes, unbeknownst to his mother. I am a renowned knuckle cracker and my specialty is to crack the knuckles of small childrens' toes. I've been doing it to Leif and William since they were babies and their mom has only busted me once or twice. I find it keeps the digits limber and the kids love it.

We stopped at a nice reef where we were all given gear and sent out for a swim. The coral was in excellent shape and all the kids and adults went in to explore the many fish and colourful corals. One of the guests had brought along a water bottle filled with bread and let it loose underwater and was swarmed by hungry little fish!

We arrived back at the hotel in time for lunch and somebody snapped the photo of the trip. William was sitting on Loretta's lap enjoying some snuggle time with Gigi when he let out a giant fart and burst into laughter. The look on Loretta's face says it all.

After lunch we all went to the Pueblo for a game of bowling. We took over three lanes and went crazy with the ten pin. Jenny cleaned up and waxed everybody, but some of the kids also had great games, which were helped when a little man would periodically drop down from the pins, run the up the lane, and redirect their shot right into the middle! You don't get that kind of help in Canadian alleys, of that I am sure. We ordered up a couple rounds of drinks and (ugh) actually had to pay for them, which was quite painful, so that drove us back to the resort for some of the free stuff.

Before long it was time for our nightly feeding. The seafood a-la-carte was beautifully decorated and they had set up three tables to accommodate our large group. The menu had some interesting selections - seafood cappuccino with croutons, chicken pyramid, and rum soaked shrimp being just a few. The four older kids - Ethan, Magnus, Leif and Stella - had their own table and by the end of the meal we realized why we hadn't heard a word out of them – they had been inventing their own language. It was sort of a pig Latin with a special twist. Smart kids, them.

At the end of the meal the servers brought out a big birthday cake for Dad and we all sung him a loud and boisterous Happy Birthday! The cake looked good, but in Cuba you just never know. Well, it turned out to be a banana cake and was super delicious. In fact, it was so good I had two pieces.

As we left the restaurant, which shared a foyer with the main buffet, we were faced with a strange sight. There was a young guy passed out cold in a chair, and somebody had pushed all the potted plants around him and thrown a chair cushion on top of him. The kids all went up to him and gave him a poke to see if he was real, but he didn't stir. Even the Cuban staffers walking by weren't sure what to make of him so they just shrugged, laughed, and continued on. We took a few pictures of the poor chump and I silently congratulated his friends on a job well done.

We went back to our building and got the kids all set up in our room with the laptop (babysitter) and a whole bunch of movies. We then set up shop in Dad and Loretta's room and cracked out the tunes and the bottles of wine somebody scoffed from the restaurant. We had a lovely chat and came up with the idea that we boys should go back to the pool restaurant bar when the ladies were ready to turn in. So the ladies turned in and we went back to the bar. That was easy.

This was the first night we'd stayed out past 10pm so we encountered the night crew, mainly young Quebecers, which wasn't too much of a surprise as those guys like to party. We ordered up some drinks and were having a laugh when some young girl came over with four glasses of strange green liquid. Being gentlemen, we accepted the drinks, knocked them back, and were surprised to find they actually weren't that gut wrenching. Then Marty looked over at some guy wearing a black t-shirt with bold writing that said " J’ai soif".  Mards, being the French speaker, let us in on the joke and told us it means, "I'm thirsty", ha ha. Then Curtis looked at the guy closer and asked him, "Hey, were you the guy that was sleeping in the buffet lobby a couple hours ago?"

The guy said, "No, not me."  So Curt gets out his phone, pulls up the picture he took and notices the guy in the picture is wearing the exact same white sandals as the guy wearing the "J'ai soif" shirt standing in front of us.

"What's this?" Curt asks. "You sure you weren't sleeping in the lobby? Those look a lot like your shoes."

"Ok, maybe I was sleeping in the lobby for a little while," our new buddy replies in that hilarious French accent.  Of course he is a Quebecer, and we rename him "Jay" in honour of his fine shirt.

We meet a few other characters, including an old war vet with a white poppy tattooed right on top of his Adam's apple and his stripper friend who claimed to have been looking for a decent beach pole to put on a show earlier that day. I'm glad the kids gave this one a miss.

Right around that time our legs decided it was time to go so they started moving and we followed them back to the hotel rooms. I call it the "drunk man autopilot".  It takes years to develop and is an excellent technique for self preservation when out partying.
Posted by Kristofor Olson at 5:09 PM