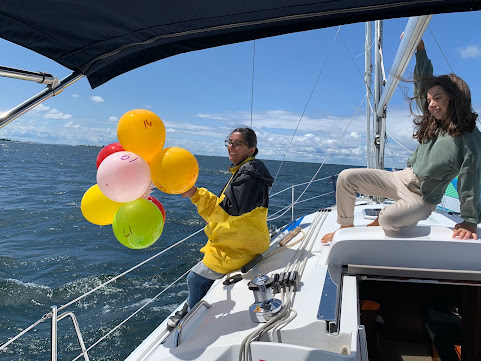 It was a cold, wet, and dreary morning and we didn’t get going until 10:30. Our plan today was to sail south-east towards the Beausoleil Island region, but the winds had really picked up and the weather forecast had deteriorated. Regardless, we sailed on, following what is called the “Small Craft Route” which is a path marked on the nautical charts that navigates you safely through the thousands of treacherous rocks, reefs, and shoals that allows you passage without having to go out into the wide open area of Georgian Bay, which was scary today with the north-west winds whipping up huge, confused waves with white foam flying off the top of them. We had a taste of that as we passed through one exposed area, and were happy to get into the more sheltered parts, until we realized the channel was extremely tight in spots and one mistake would send you crashing almost instantly into rocks. I was nervous with trepidation as we passed through these, hoping that my trusty diesel would not fail me. This was another moment of the trip when the nervous anxiety takes hold and you start doubting your choices but are still secretly enjoying the thrill of the risk and the uncertainty of the outcome. When we perhaps a third of the way through our route, we decided it was just too dodgy to continue, so after a 12 mile run, we turned into 12 Mile Bay and were rewarded with….a beautiful bouquet of 8 floating birthday balloons! Like pros, Ana and Stella leaped on deck, prepared the boat hook, and effortlessly snagged up the prize. This was by far our largest balloon catch ever.

We sailed into an unnamed anchorage on the south side of the bay and found six other boats already there, seeking shelter. We anchored and HQ2 arrived shortly thereafter and tied up with us. A planning and scheming session ensured and thankfully Ana looked out the window as we were talking and noticed that our anchor had dragged and we were only 20 feet away from a rocky shoal. We leaped into action, pulled anchor, and moved into a much better location, then each dropped an anchor, plus an aft anchor to hold us in place. As we were trying to get anchored a crusty sailor lady was standing on her bow, staring at us and yelling when she felt we were getting too close, as it took two attempts to get the anchor set. A bit later on, Tony heaved severed chunks of a watermelon carcass overboard, thinking the pieces would sink, but instead they behaved just like little green boats, and floated their way right past her vessel and over to the powerboat behind her, which was the perfect setup to blame the lake pollution on the crusty sail boater, if such a thing would become necessary. Plus it provided the missing name for this anchorage - Watermelon Bay. 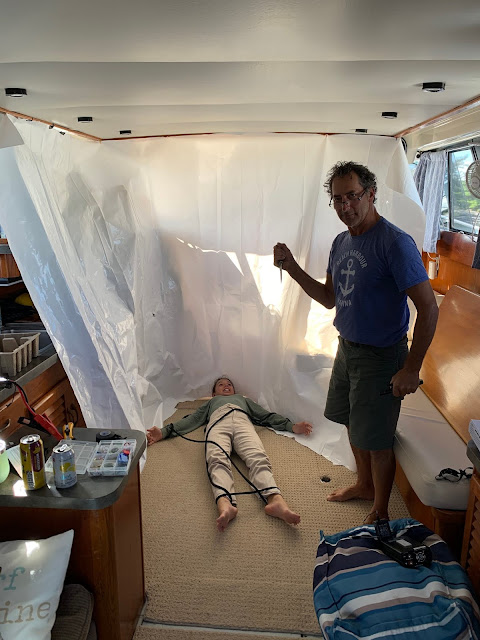 We decided to stay put for the night, so we had to think up something to keep us busy - movie night! We had brought along a projector and Tony had some white shrink-wrap, perfect for a screen. So we got to work constructing the theatre in the salon of HQ2, which was more complicated than you may think; it involved multi-meter 12 volt system testing, mobile inverters, blown fuses, jury-rigged electrical connections, re-constructed fuses with copper wire and tinfoil, Bluetooth speaker connections, auxiliary speaker cable, USB keys, HDMI cables, utility knives, strategically placed pins, piled up boxes, lots of tape, and then a short photo op when we realized the setup looked just like one of Dexter’s kill rooms, so Tony grabbed a knife and Stella played the victim. That whole operation took about three hours, but it was time well spent. 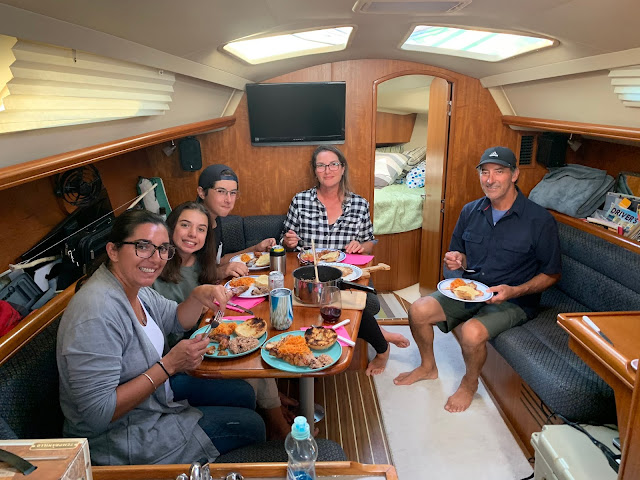 Stella and I took a dinghy ride to explore the bay, then we all joined forces to create a magnificent dinner on Bella Blue - pork kebabs, BBQ chicken, spaghetti squash, noodles, and lots of the finest boat-friendly boxed vino. We finished in time for Tony and I to “Skip The Dishes” and slip away for a cigar on the rocks, something we’d been planning for several days, and Magnus took on dinghy chauffeur and photographer duties, and entertained us by doing wild 360’s, then for fun we grabbed a tree floating by the shore, loaded it up on the dinghy, and hauled it back to the boat like a war prize. We got into a little bit of trouble for that whole episode, but movie night (Spy Game) turned out so spectacularly good that all was forgiven (I think). It also helped that Ana was contacted by a potential buyer and we had an appointment to show Bella Blue in Midland in two days! It’s nice when a day finishes with joyful events. 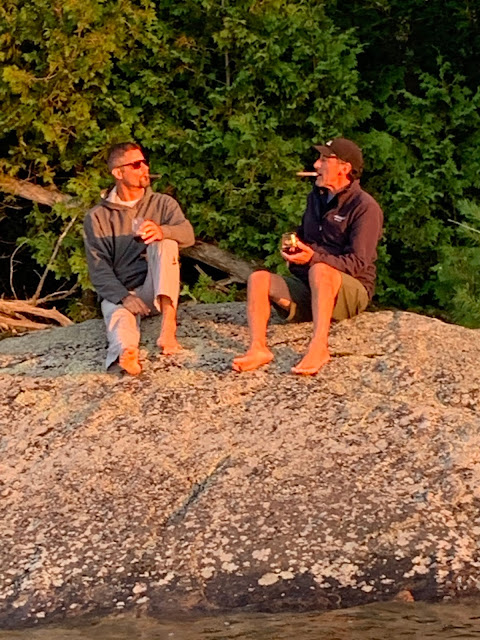 Posted by Kristofor Olson at 9:20 PM