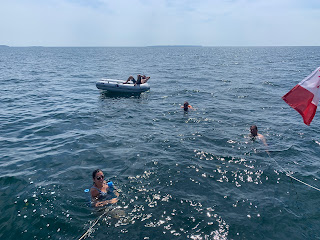 I awoke early and headed straight up to the house to have coffee with Andrew. Like me, he’s always been an early riser, so quite often when I’m at home and my phone starts buzzing at 5:30am, I know with certainty who it is.

Before long, Tony (another early riser) joined in on the coffee session as we waited for the girls to get ready, and when they did they decided to go for a walk in the neighbourhood. We took the opportunity to get into the lake and mark that high spot on the bottom that SeaLight’s keel had run into yesterday so that the dredger could be redeployed this week. It was again a hot a lovely day so the swim felt great.

It was around noon that we were finally ready to go so we pushed off, waved goodbye to Andrew and Victoria on the dock, had one last look at Holmes Mansion, then were on our way. As we had made two prior trips to Thousand Islands with Tony and Angela we decided to head back to the US side and visit some of the towns we missed on our way here. We stopped briefly at Portsmouth marina in Kingston for diesel and a pump out, then set a course south and east towards Sackets Harbour, which is located in the most northeast corner of Lake Ontario. But there was something wrong. The autopilot was acting crazy. I would lock in a heading and the boat would hold it for a minute, then start straying to the west. I reviewed all the settings on the autopilot controller and it all looked fine. I reset it to factory default, then did the required calibration sequence which requires you to do a series of slow 360’s in the boat. No dice. I then started checking all the wire connections deep in the belly of SeaLight, crawling around her most sensitive inner parts. Everything looked good. I checked in Tony and Angela’s cabin where the autopilot’s fluxgate compass was located to make sure there was no metal around it. All good there, nothing but a fabric lunch bag nearby. 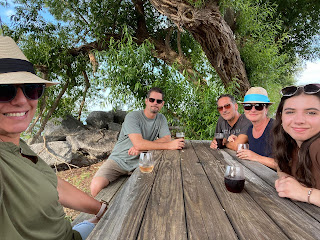 Back at the helm I started fiddling around with the autopilot controller again, and somehow changed the default language to Korean.

“Oh shit, I changed the language to Korean!” I said.

“I don’t know, I was just pressing some buttons and poof, Korean.”

“You better change it back.”

“I can’t read any of the buttons, it’s in Korean!”

Of course I couldn’t find anything in google on the Raymarine menu structure so I sat there, out of options, until Stella came over, pulled something up on her phone, held it in front of the autopilot screen, and sweet English magically appeared, instantly. Stella is now my go-to IT Helpdesk. 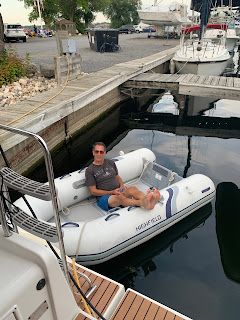 My next move was to start pulling wires out and reconnecting things but before I got started on that, Ana’s googling found that a metal or magnetic item even within six feet of the fluxgate compass could result in the behavior we were seeing. So Tony and Angela went back down into the cabin to look. Nope, just that innocent fabric lunch bag…with a damn magnetic latch! The lunch bag was removed, the autopilot’s pristine operation was restored, and we stopped the boat for a celebratory swim.

We arrived to Sackets Harbour in the early evening and tried dropping the hook in the anchorage marked on the charts, but it must have been a flat, shale rock bottom as we could not get that anchor to stick into anything. Ana called Navy Point Marina and they found a slip for us, just barely big enough to side-slide SeaLight into. After getting docked we mixed up some drinks and walked over to a nice seating area overlooking the bay for a sundowner. The evening was beautiful, but the next day’s forecast wasn’t looking too beautiful at all – high winds, rain, thunderstorms. 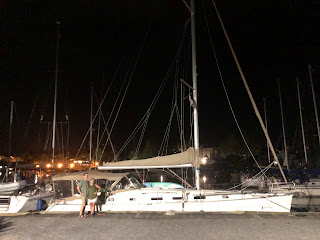 After a delicious dinner of butterflied pork loins, grilled foil packs of potatoes, and fresh veggies, we went for a walk into the town, in darkness. The only thing open was the Boathouse restaurant with this phenomenal garden patio, but there were also a number of cute shops and houses along the main street, as well as a military museum.

We decided to call it a day, and return to explore tomorrow if we were unable to travel because of the weather. Tony and I had one more drink in the cockpit to the sounds of an auto-generated country music playlist based on “Buy Me A Boat” by Chris Janson – the Olson family currently hottest trending (and perhaps only) country music song.

Posted by Kristofor Olson at 6:50 AM