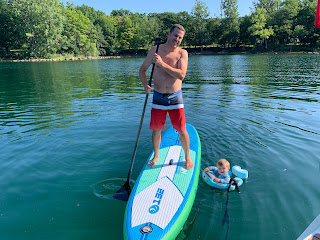 Has there ever been a more beautiful day to wake up to? Clear skies, warm temperature, a quiet anchorage, and clear cool water. I was the first one up so went for a long paddleboard ride circumnavigating the bay. Pat and Beau appeared not long after that and took a swim/lake bath and paddleboard ride themselves. Once everybody was up we made a big bacon and egger breakfast, complete with Corona beers, to start the day out right. After a bit of lounging around we pulled up the anchor and set a course back to Canada. With all the turns and lack of wind there wasn’t much point sailing, so we motored all the way to Gananoque, nerve centre for the Canadian side of the Thousand Islands. As expected, the check-in to Canadian customs was long, overly complicated, and ungratifying – pretty much the opposite of entering the US which was all done through a simple phone app and video call. Canada forces boaters to dock at an approved location before calling in, so we found a nice piece of unoccupied dock and got just close enough for Pat to do a Superman leap. The girls then tossed him two lines and he pulled them simultaneously, Superman-style, and powered the boat into the dock. Since we were there, and waiting on hold, we took the opportunity to dump all our garbage and recycling, and fill up the water tanks. We didn’t stick around long enough to ask if there was a charge for any of that.

We powered back out to some nearby island groups, which are clustered close to Gananoque. I had picked out a couple of potential anchorage spots on the map so we motored to those, but at each one we found issues – too shallow, not sheltered enough, not enough room to fit SeaLight, private cabins on shore. Beau too was having a bad day and at one point something weird started happening to his face – it started getting all squished up, and he was making this strange sound, then a tiny drop of water fell from his eye and I realized he was crying! First time we’d heard him cry all trip. It lasted a about 5 seconds then Melissa pulled out another of those baby sludge packs – this one some strange combination like Salmon and Radish – and once she squirted a few cubic inches of this organic glue into him he was completely happy again. We searched for an anchorage unsuccessfully for at least three hours, then finally decided to head to Lindsay Island, one of the westernmost spots, and along the way towards our friend Andrew’s house where we’d be travelling to the following day. We’d anchored in Lindsay several times before and it's a great spot so we motored in, set the hook, then cracked some beers and started talking like pirates. There is nothing more fun than talking like a pirate. Try it. Say, “Argh, would one of you limey cabin boys hand me that tube of butt paste. Me pantaloons have been chafing me arse all afternoon.” See, I told you it’s fun. 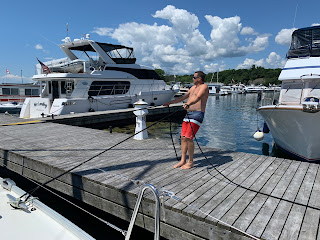 During the pirate talk and drinking Ana came up with this profoundly good idea. Beau was getting tired of all his regular toys like the boat engine key, a bungee cord, the spider web dusting broom, the bimini snap tool, and the bottle of diesel additive, so Ana grabbed this blue rubber pastry brush we use for saucing up meat on the bbq and showed it to him. He seemed interested at first, and reached out and touched it and as soon as his fingers caused the tiny blue rubber fingers to move, he recoiled in disgust, making an awful face. Ana, noticing the reaction, then rubbed it on his cheek which completely creeped him out and made his body shiver as he drew away. What fun! We kept the game of “torture the baby” going for quite a while, in fact right up until our friends Andrew and Victoria pulled up in their fancy Regal 32’ bowrider and we tied the boats together for happy hour, round 2.

A stop at Andrew and Vic’s enormous mansion in the Bateau Channel is the only constant in our trips to the Thousand Islands. You see, he has a wonderfully huge waterfront property, an executive house with every piece of automation and smart home technology you could imagine, a long range telescope to spy on the neighbours across the channel on Howe Island, a huge dock with enough depth to host a sailboat, an endless supply of rum and fancy beer, three extra bedrooms, free prime ribs from his meat supplier, an ice machine in every room, high tech toilets and showers, a dog, a truck to borrow for getting groceries and, most importantly, an outstanding sense of humour. Vic has an equally outstanding sense of patience to put up with his shenanigans (and mine when we visit). One thing I like about Andrew is he really understands our needs. For instance, he knows I like my slips freshly dredged, so earlier in the week he had arranged for a dredging company to tug their gigantic barge over and clear out thousand of pounds of rocks and mud from the dock area, for an extortionate amount of money. He’s just that kind of guy. 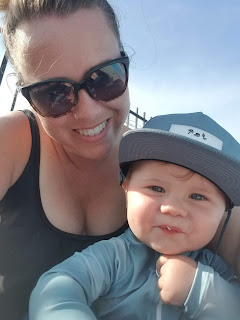 As we drank a few rounds of rum and cokes we caught up on news and had some laughs. They claimed it was a social visit, but he was really here to inspect our boat. You see, gypsy sailboats tend to bring down property values, and property value is very important to Andrew, so he made us take down all the beef jerky we were drying on the lifelines. It was a fair compromise for free dockage.

We tried talking them into staying for dinner, but they had to get back to their palace to discipline the butler, so we were left to finish off the day by consuming an outrageous quantity of amazing skewers Pat and Melissa had brought along – delicious marinated pork chunks, beefy mushrooms, wads of haloumi cheese, and fresh peppers, all seared to perfection on SeaLight’s ultra hot bbq grill.

Posted by Kristofor Olson at 6:41 AM