As we motored south of Wolf Island along the glassy lake surface at 7:10am we heard a strange drone of faraway powerboat engines that was approaching rapidly. We looked to the east and saw four boats approaching at high speed. Bass boats! They ripped by us in turn, moving at maximum speed as they jetted off to their fishing holes. My enthusiastic waving was unreturned as the drivers were laser focused on the paths ahead of them, driving carefully, as an errant wave or wake could flip those boats right over. Bass boats are designed specifically for fishing and have huge outboard engines, extremely low waterlines, and flat surfaces from which to fish from. From the same direction came another three boats, then five more, and for the next half an hour we were passed by at least a hundred bass boats, indicating an American tournament and it must have been a big one because I’ve never seen so many bass boats together in one place in my life, and there probably aren’t this many fancy bass boats in all of Canada. I could almost smell the chewing tobacco, Bud Light, and atomized bass lure scent enhancer from our cockpit.

We soon reached the town of Clayton, New York and tied up SeaLight at the public docking area. After breakfast we geared up for a walk to stretch out the legs after a long night on the water. Clayton is a picture perfect American town, and the largest on the US side of the Thousand Islands…at 1900 people. Directly beside the docks is the Antique Boat Museum, and there we saw a poster for the Bassmaster fishing tournament, which had kicked off this morning and would continue for three days. We made note of the weigh-in times later this afternoon so we could return to see what it was all about. 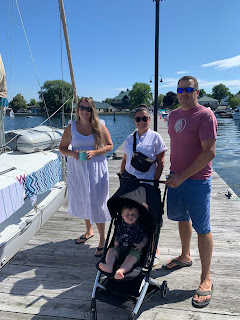 With Beau strapped into his stroller and enjoying the ride as his eyes darted back and forth taking everything in, we walked the short distance into the main downtown area, which is located right on the river with stunning views, cute shops, bars, restaurants, and was already filled with people. We went into one shop called RAKS Clothing, Footwear & Gifts and Pat went gaga over the huge selection of OluKai sandals and shoes. Melissa loved the clothes. Ana was looking at everything. I hung out with Beau, criss-crossing the same aisles in the store over and over until I couldn’t stand it anymore and grabbed Ana then the three of us walked further down the street and found ourselves some nice Adirondack chair to sit and enjoy the view over the water and teach Beau some bad words.

Melissa and Pat soon joined us and we explored the rest of the downtown finding, among other things, the Clayton Opera House, a kick-ass hardware store where I picked up a few doodads for the boat, and the Eagle Shoppe – I have no idea what they sold but that fancy suffix really gave me some ideas on how I can class up my writing. Which of the following sentences sounds more classy to you?

I sat down on the toilet and took a shit.

I satte down on the toilette and took a shitte.

See what I mean?

It was time for drinks and lunch so Pat, Beau and I found at table at the riverfront Bella’s and ordered a round of manly Peach Daiquiris then sipped them with our pinky fingers in the air while the ladies finished up their retail explorations. They soon joined us and we enjoyed a lovely lunch while Beau charmed all the ladies at the surrounding tables – man, that kid can hold an audience!

After lunch the lads went to the Antique Boat Museum while the ladies returned to the shoppes. The museum clams the largest freshwater antique boat in the US with over 300 boats on display, most out of the water, but a few beauties actually in the water which are operated regularly. The boating and fishing culture in this area goes back right to the founding of these countries and the Thousand Islands has been a playground for water lovers all this time and continues to be. As we were winding up in the speedboat gallery we spotted the girls coming up the street so joined them and we went over to the Bassmaster weigh-in which was underway. 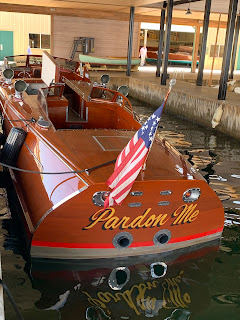 The whole thing was very weird. Fox Sports had professional cameras everywhere and wrestling-style overexcited announcers hosting the proceedings and introducing the fishermen. That was not the only wrestling parallel – some of these fishermen have wrestling names: The Clown Prince, Little Joe, The Spinnerbait Kid, Big Mac, The General, and even crazier, as each one came out their theme song would blare from the giant speakers. Thunderstruck, You Got Another Thing Coming and other overplayed hard rock classics were well represented, but one guy’s song was Baby Shark, and you should have seen Beau smiling at that one. Each fisherman came out from behind a curtain carrying his bag of five fish. He would reach into the bag, pull out the two biggest ones he had caught, then hold them up in front of him with arms outstretched, smiling widely, and the announcer would reveal the total weight of his five fish. Seems 25 pounds was a big number, and a couple had bags over that weight, while many were under, as low as 17 pounds. But everybody got a round of applause for however many pounds of slaughtered fish they brought home.

As we walked back to the boat we realized the wind had really picked up and the bay water was choppy as hell, not just from the wind, but also from the dozens or hundreds of boats zipping around. When we arrived at SeaLight we saw her being rammed into the dock from the wind and wake and realized we had not positioned the fenders properly and the hull was being scraped by the wood. We pushed her out and repositioned the fenders then assessed the damage. It was mostly cosmetic, but looked awful. I added that one to my list of fall projects then we all had a little nap. 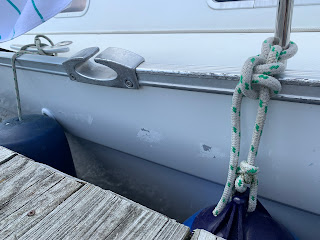 After our nap, and a search for ice that took Pat and I nearly an hour, we pushed SeaLight off the dock and motored away. Ten minutes later we realized we had left a fender tied to the dock so we circled back around, had somebody on the dock toss it to us, then were off for good. We sailed a short distance north to an anchorage at Picton Island and were shocked to find ourselves the only boat there. A beautiful, warm lake swim ensued then we made a gorgeous dinner of pork tenderloin, zucchini, tiny potatoes, and lots of red wine to wash it down.

We finished the evening by turning off all the lights and sitting in the cockpit, enjoying the silence, the warm air, the darkness, and the solitude of a beautiful anchorage in the islands.

Posted by Kristofor Olson at 9:00 AM