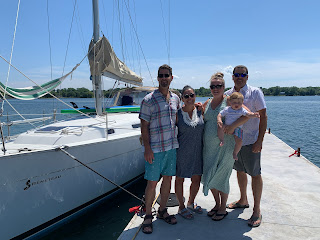 It was transition day. The halfway point of the trip. Time to turn around and start heading west. After a round of swims and lake baths in the warm water of the beautifully calm anchorage, we pulled anchor and started the easy 10 mile run through the Bateau Channel to Andrew’s place. Yesterday we had hung out a hammock between the headsail and the mast so this morning we all took turns swinging and lounging as SeaLight slowly motored her way down the calm channel.

Andrew was there to greet us as we maneuvered SeaLight into the dock slip, right beside the huge barge. We tickled one rock with our keel on the way in, but adjusted our approach a bit and easily got her docked and tied up. A round of hugs ensued, then Andrew asked if we'd like to take the Diamond Level docking package again this time which included free electrical, free water, gasoline top-ups, unlimited ice, free laundry service, and all the booze and food we could consume. We’d been very happy with this package in the past so we stuck with it.

Pat and Melissa asked for some time alone to untangle the complicated mess of gear they had stuffed into the aft cabins. As they had arrived before us on the first day, we didn’t know how much they had brought, but every day they had been pulling out a new cool piece of kit, so I expected the load was substantial. 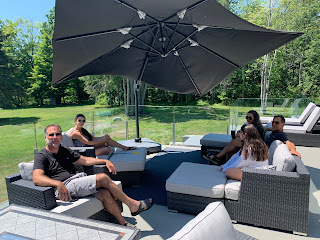 Ana and I went up to the house to have coffee with Andrew and Victoria. They took us on a tour of the house to see all the new goodies they had procured since the last time we were there. We first saw their new ultra luxurious, ultra automated, Japanese-inspired, feng shui toilet fabulouso. It had everything – auto-lowering seat, LED night lighting, retractable sprayers with rear and frontal cycles, water massage settings, auto flush, odour control, auto dryer, auto-sanitize, heated seat, temperature control. If this spectacular unit didn’t provide you with the cleanest and happiest ringpiece on the block, then there really was no hope for you. The lower level now boasted a huge fitness coach machine with a 7 foot high screen that swung open to reveal an inventory of dumbbells, kettle bells, tension straps, and other fitness gear. The touch screen allowing you to select any of hundreds of prerecorded workouts - yoga, pilates, cycling, stretching, and similar painful programs, but the one that really grabbed my attention was the hot dog speed eating course by American competitive eating champion Joey Chestnut. I would definitely be checking that one out later.

After the tour we looked out from the expansive deck to the dock and we could scarcely see the surface of it for all the gear that had been heaped on. We walked down to investigate. The pile was extraordinary. Andrew looked to the pile, then to the boat, then back to the pile.

“How did they fit it all in?” he asked in wonder.

“Ever seen those Narnia movies? The Lion, the Witch, and the Wardrobe? You know that closet that opens into an entire world?” I said. 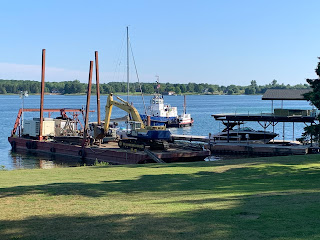 Before long, Pat’s parents John and Judy arrived with our friends Tony and Angela and our sweet daughter Stella – new crew for the return trip! We had a nice visit, they got the tour of the palace, and then we gave John a bottle of whisky to celebrate his 70th birthday, which he had so far been spent driving for four hours through traffic on the 401 highway and would require another four on the way home. Pat pulled some more Narnia magic and crammed all their gear into his dad’s truck. We had a round of hugs, said our goodbyes, gave Beau a big kiss, and they were on their way after such an incredible week.

Ana, Angela, Stella, and Victoria went out food shopping while the boys stayed home and didn’t do much besides having a couple of rum and cokes on the boat, visiting, and occasionally checking in on the gigantic prime rib roasting on the smoker. We got off easy.

Soon, the ladies had returned, as well as Andrew and Vic’s friends Adrian and Sarah, so once all the groceries were packed away we all gathered on the deck and had a great time visiting, laughing, and telling stories. Adrian and Sarah are really cool cats – we had met them the last time we were here, but got to know them a bit better this time around. As mealtime approached, their neighbours Don and Jan also arrived and soon we were gathered around the dining room table with whopping huge prime rib slabs on our plates.

After a whole lot of food, drinks, and laughs, the day caught up with us and we retired exhausted to SeaLight. Week two had begun.

Posted by Kristofor Olson at 4:40 AM