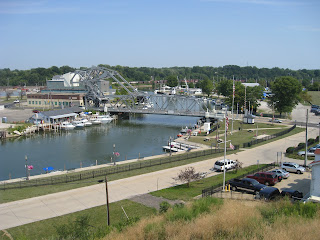 When we were planning our trip this year I told the gang I’d like to visit Ashtabula, which is a harbour town between Erie and Cleveland.  We have passed it many times, and from the lake it looks like nothing more than a giant coal pile, a post industrial wasteland.  As expected, I was made fun of, and expected nothing less.  But the last laugh was to be mine.

We left Cleveland shortly after 5 am and had a nice, smooth sail all the way to Ashtabula, stopping only for a mid morning swim and bath in the lake, which was highly enjoyable, and something we hadn’t done nearly enough of this trip, mainly because of the rough water conditions.  Andrew whizzed past us at some point and arrived in Ashtabula first, organized dockage for us and sent a slightly humbling email suggesting the town was “nicer than expected”.

Arriving into Ashtabula harbour is gritty indeed.  On the right, after passing the harbour entrance and rustic lighthouse, is the said giant coal piles and giant loading machines which are as black and dirty as the coal that feeds them.  To the left is a network of railway lines and hundreds, if not thousands of rail cars, some of which were being connected to engines which produced startling crashing noises whose vibrations could actually be felt through the boat.  After about a mile of this you round a corner to find a lift bridge and a cute downtown area.  We wait a few minutes then watch the lift bridge engage and rise up high into the air, giving us plenty of room to pass beneath.  Our docks are at Ashtabula Yacht Club, just a couple hundred metres past the bridge.  We get tied up, plugged in and get the air conditioning system humming, which is welcome as it’s turned into a scorcher of a day.  We then wander into town and find a charming little historic waterfront area, which is full of cool restaurants, bars, and the kinds of shops often frequented by “ladies who lunch” selling items such as fancy jellies, antique furniture, history books, soaps which look and smell edible, classy walking canes, statuettes made of stone, expensive purses, gourmet coffee and cutlery and plates which look much too nice to actually eat with.

The men and kids find a nice chophouse, called Briquettes, to enjoy a premium beer, and after reviewing the menu, which included smoked brisket, St. Louis ribs, homemade coleslaw and corn bread, decide to unilaterally veto the originally decided upon dinner plans (cook ham and potatoes in sailboat oven, resulting in dirty dishes and a boat interior hot enough to melt steel) and return for genuine US style barbeque.

After a visit to see the lift bridge close up, which is nothing short of amazing, and a short break back at the boat, we return for a delicious dinner, then stagger back to the boats, have a quick nightcap and pack it in for the evening. 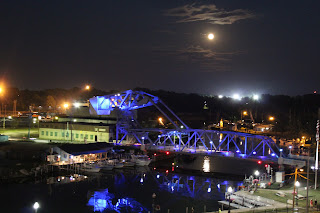 Posted by Kristofor Olson at 10:29 PM