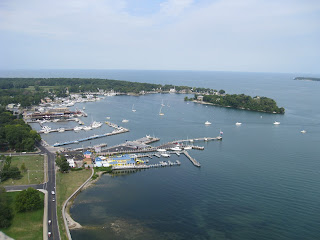 Even after two practically sleepless nights, all it takes is one great sleep to put you back on track, and that’s how we found ourselves at 8 in the morning.  We started the day with a round of Raisin Bran and a bit of sweet Morphine on the stereo, which was quickly shut off by my less musically adventurous family in favour of the sound of the sea gulls screeching outside.

There seemed to be a small storm pushing through, which was causing very windy conditions, so we waited for a break in the weather, then when it came we blasted out of dock over to South Bass island, home of the infamous Put-in-Bay, a rollicking, crazy, busy tourist town that would seem to have been lifted right out of the Caribbean and dropped in western lake Erie.  The plan was for us to find dockage in time to meet Marty, Jen and their boys Leif and William, who would be arriving on one of the morning ferries from Sandusky.  Andrew arrived first and got us docks immediately across from the Jet Express ferry terminal, and just a short walk away from downtown.  As we were docking a couple of the locals slithered up in the water – Lake Erie water snakes, which live only in the Lake Erie islands and were endangered at one point but, judging by the quantity of them around, were back to a pretty healthy population.  Andrew told Magnus they were scoping out a way into the boat so they could cozy up to him in bed later that night, thankfully Magnus knew he was lying otherwise he would have been terrified as he has always had a real fear of snakes.

Marty and the gang arrived before noon and after a complimentary round of drinks courtesy of Endeavour’s beer fridge, we rented some golf carts and blazed a path around South Bass island.  Circumnavigating the islands doesn’t take too long as it’s very small, so we made plenty of stops including the peace monument, which is a 300 foot tower with a viewpoint on top, Perry’s caves (which were pretty lame), an ice cream stop at a beach on the south side of the island, the grocery store, and finally a bar for a few cool drinks.  The heat was stifling so we did our best to keep in the shade and maintain a high level of liquidation.

We returned the golf carts then went back to the boats and made an especially delicious steak dinner with the help of the gas barbeque which was located on the dock under a nice gazebo and dining area.  We spend the rest of the evening visiting and trying to figure out sleeping arrangements for eight in our little sailboat, which sleeps six more or less comfortably, so we were a little squeezed, though we were able to make it work. 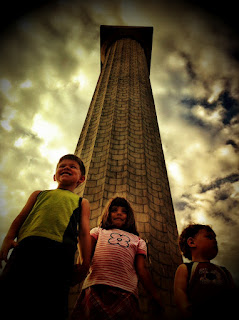 Posted by Kristofor Olson at 9:59 PM