Europe is all about the churches and museums 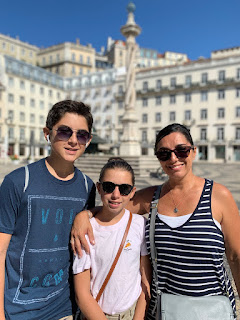 After a slightly fitful, but not entirely bad sleep, I was up at 6:30 and out the door for an early morning walk to try and get a better feel for our local neighbourhood. I looked at a map yesterday and the Alfama area is a twisted labyrinth of curvy streets and cobblestoned pathways, and to make it worse the entire area is situated on a steep hill so it’s practically impossible to relate a map to what you are actually seeing on the ground. So I headed out blind and started walking, down the electric trolley tracks, past a restauranteur just opening up his shop and setting up tables for the morning coffee crowd, down a skinny staircase, past a gigantic and ancient iron gate, through what looked to be somebody’s back patio, then down a very long staircase that eventually popped out in front of the Fado Museum (dedicated to the unmistakable style of Portuguese melancholic folk/blues music which originated in the Alfama neighbourhood), which I did remember seeing on the map, so had a good idea of where I was. I continued south towards the ocean and came to a wide, double lane roadway, which I crossed and then walked along the ocean eastward, passing an enormous ferry and cruise ship terminal to my right and a huge train station to my left, and a military museum. I also passed a young couple, wearing fancy evening clothes, smoking, looking worse for wear, with smeared lipstick and rooster tails, then I came across another couple making out, and then a group of young Portuguese sitting on the curb laughing and smoking, and it finally dawned on me that I was passing through the remnants of the Saturday night clubbing scene. It reminded me of the few times in my 20’s and 30’s that I pulled all nighters, but I’ve always been more of a morning person. In fact, there is nothing I like better than walking through a big city, just after dawn, when she is just beginning to wake up for the day, but the aftermath from the previous evening is still present. This morning I saw empty beer bottles, abandoned bikes and electric scooters, pigeons eating up scraps of discarded bread, soggy cigarette butts wedged between the cobblestones, as if placed there artistically, a partially squashed yellow party hat, a few food wrappers, a vomit splatter, a pile of dog turds mashed into the street by an unsuspecting shoe. There was also the overwhelming stench of stale piss anytime I passed by an obscured corner, so I guessed that it hadn’t rained in Lisbon for a few days. She was due for a douche.

By the time I arrived home the troops were not exactly ready to go, but at least were not still sleeping, so I hurried them along, we had breakfast, and were soon out the door. We walked back along the route we had taken the previous night, to better explore it in the daylight, and daylight there was, with not a cloud in the sky and the temperature rising rapidly. We stopped for a coffee at a cafe overlooking the ocean, then walked up a staircase, which lead to a pathway, which lead to a street, which lead to the entrance of the famous Sao Jorge castle. The entrance price, at 10 euro each, was deemed not worth it, as we didn’t want to spend a long time here, so instead we browse through one of the gift shops and I bought a lovely sardine bookmark, which will be a classy replacement for the scruffy, unfashionable bits of toilet paper I have been using for markers in my books.

Between us and the city centre was the Cathedral of St. Mary, so we stopped in for a look around. There was a set of wall displays explaining the ongoing archaeological work happening on the grounds that that had unearthed layers of civilization dating back to the Roman ages to the Islamic age to the Medieval times to the eventual Christian capture of the site around the year 1147 if I got the facts right. I imagine digging up ground for a new shopping mall anywhere in this country is tricky business as you have thousands of years of potential relics to scuttle your project.

Because we were still pretty fresh into the trip, and didn’t yet have internet on Ana’s phone, we hadn’t figured out the best transport options - bus, tram, train, electric scooter, bikes - so we went with the transport option we know best - our feet. And as I like to say to the kids when they ask me if a particular destination is walkable, “Any destination is walkable if you have the time.” And we had the time. 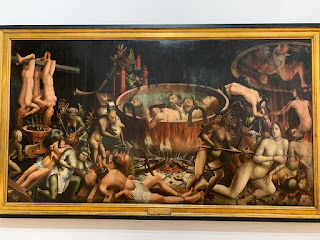 The hour long walk got a bit hot and spicy as the sun rose into the sky, but not so bad that Stella didn’t challenge me to a race up the long flight of stairs that led to the national gallery. And, of course she won like she always does unless I cheat a bit and get a bunch of steps in before she starts. It’s hard to compete with a young, healthy body that has not yet been subjected to years of late nights, beer drinking and cigar smoking…but I like to try. We paid the entrance fee and walked into the nicely air conditioned building. Now here’s the deal with Olson family visits to art galleries. Ana and the kids love nothing better than browsing through shops in busy commercial areas or markets. They love looking for deals, sorting through tourist trinkets, finding presents for friends, picking through discount bins, and otherwise taking in the full retail experience. I don’t like any of that. Entering a shop of any kind (unless it sells alcohol, books or cigars) makes my arm hairs stand on end, and if it’s a shop that sells tourist kitsch or ridiculously gifty type crap I suffer a full-on knick knack attack that brings on heart palpitations, heavy sweating, and utterances of severe profanity. So I usually just stand in the street, leaning against a wall, watching the people passing by, and I’m perfectly okay with that, but even happier if I can find a pub and spend some time meeting new beers. But in exchange, I do require the rest of them to either join me on at least one gallery excursion, or excuse me while I go by myself. In this case, they joined me, and I think they all enjoyed it, at least up until we reached the third floor which featured Portuguese religious sculpture and paintings and exceptionally comfortable couches. Ana fell asleep on a black leather sectional while the kids propped her up and firmly glued their attention to their devices. By the end, I was happy, they were happy, and we all walked joyfully back towards the centre until we reached our lunch spot - the Time Out food emporium. 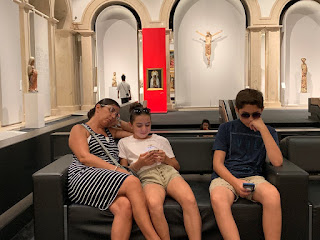 My uncle Michael had told us about this place as he and his wife Anna had recently visited Portugal, and said this was a great place to find a lot of different types of food under one roof. We arrived right around 1:30 to find a huge complex with at least 50 food vendors, serving everything from sardines to oysters to steak to fancy tacos. We prowled the rows and rows of tables until we pounced upon a spot some people were vacating and then we took turns getting food. Ana had a steak sandwich, Stella had salmon salad, I had a cod sandwich and Magnus had a plate of gyoza. Honestly, the food was ok, but the prices were crazy, and we left a little disappointed. Plus it seemed like the vast majority of the crowd were foreigners, so it was definitely not a value lunch spot - which my uncle had fairly warned us about. But if you didn’t mind the prices, you could easily eat here every day of your trip. 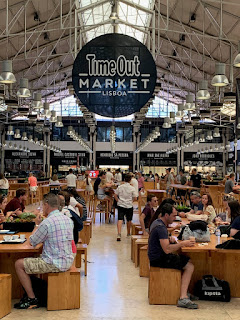 It was time for some retail therapy so we walked into the Chiado area where Ana picked up a SIM card for her phone and then her and the kids browsed a bunch of shops while I took refuge first in a bookstore, then on the steps of the nearby church and watched the fine people of Lisbon (and visitors) wander up and down the promenade. We soon reunited and started walking but were stopped dead in our tracks by an amazing band called Os Camelos (The Camels) playing in the middle of one of the pedestrian streets drawing a much smaller crowd than they deserved. It was a three piece featuring a drummer with a single bongo type drum, a tenor sax player, and a lead guy playing a ukulele bass, and let me tell you - these guys were no strangers to Morphine, Primus, Rush, and Gogol Bordello - a few of my favourite bands. We stood and listened for a good while then tossed a few euros into the open guitar case.

With our newly acquired internet connectivity, we pulled up the Uber app and found that a ride back to home base was only 4 euro so we gave our legs a break and zipped back to the apartment, but not before stopping at the corner store to pick up a bit of food for a “backpacker dinner”. It was time for a chill out session so everyone did their own thing for a couple of hours, we ate dinner, then went back out into the night and got lost wandering around Alfama, but our wanderings took us right to a bar with live Fado music. It was too full to get in, so we stood outside and listened to a few songs, and then went for a drink while Magnus used his mom’s phone app to rent an electric Bird scooter and zip around the cobblestoned surfaces for a while. 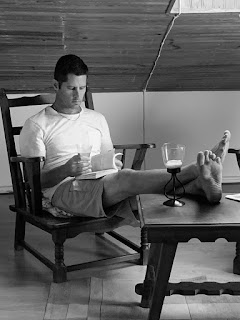 It was somewhere past midnight when we arrived home, did a quick wash up, and passed out, exhausted from a very busy day, but happy with the short time we spent in Lisbon, reacquainting ourselves with this amazing city.
Posted by Kristofor Olson at 1:00 PM