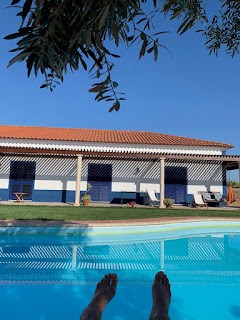 After yesterday’s inspired breakfast, there was no choice but to return to the same place for our final meal in Evora. The basic breakfast included scrambled eggs of a deep yellow hue, perfectly cooked, three thick pieces of toast made from bread baked fresh this morning, cut lengthwise into thirds and generously buttered, three ripe cherry tomatoes, a small bowl of berry jam with a tiny spoon to scoop it onto the toast, and freshly squeezed pineapple juice blended with bits of fresh mint. And, of course, it came with a coffee of your choice - decaf Americano for me and a gallao for Ana, which is an espresso mixed with milk. I felt like the King of Evora. 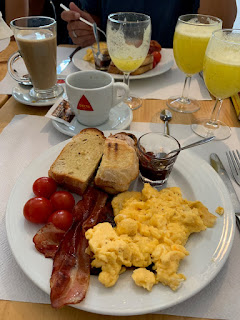 The drive to our next stop, Beja, further south, took about an hour and led us through endless fields of cork and olive trees, with vineyards appearing here and there, and few signs of people. This Alentejo region is the largest of the country and serves as the breadbasket of the nation, producing huge quantities of fruits, vegetables and other farm products. The scenery is striking and much different than that in the north. I found it to be slightly haunting with the ancient and partially denuded cork trees competing for dominance with the twisted olive trees pushing up out of the earth. But at the same time it was peaceful and inviting as most of the land was cleared of brush, inviting you in for a walk amongst the trees.

Ana had booked us an Air B&B at a farmhouse, just a few kilometres outside of Beja, and we arrived to find a beautiful house with rooms overlooking a teardrop shaped pool, all surrounded by fields of figs, corn, olive trees and pomegranate bushes. The lady of the house Helena met us and told us that the room was not quite ready yet so we waited under a canopied sitting area near the pool until she was done, then we changed into our swimsuits and jumped into the surprisingly cold pool, which was refreshing beyond belief as the temperature outside had rocketed up to 36 degrees. We learned that Beja typically boasts the hottest summer temperatures in Portugal, but it still cools down to the mid-teens at night, making it perfect for sleeping. 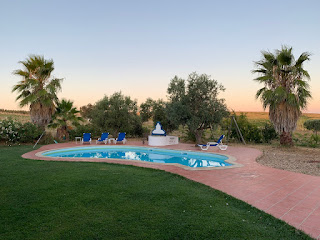 Although it was lunchtime, we didn’t feel like driving into the city, so we ate a few of the snacks we still had (days old potato chips, oreos, nectarines and apples) and hung out at the pool and in the cool room right until 4pm, when hunger took over and we decided to go into town, even though it was still scorching hot outside. Well, Beja was practically deserted and we walked around feeling like we were about to get overrun by a horde of zombies at any moment. We didn’t see much of interest (yes, there is a castle and churches and museums but the heat had drained our enthusiasm for culture snorting) so we just wandered around for a while, looking for somewhere to eat, and we finally found a walking street with a few cafes open and sat down at one of them. There are many restaurants in the city, but none of them were open yet for dinner so we were stuck at a rather awkward time. We ordered snacks of bifanas (fried pork slices served in a bun) and toasted ham and cheese and decided to stop at a grocery store to pick up some food for a backpacker dinner back at the room instead of loitering around in the intense heat waiting for a restaurant to open. We grabbed a roast chicken, rice, fried cod croquettes, pre-made Caesar salads, wine, and it was all rather terrible, except for the wine, making for the worst backpacker dinner in recent memory. 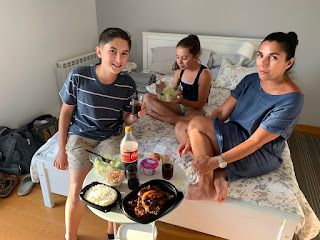 The remainder of the evening was spent playing with the three friendly farm dogs (Cookie, Quema, Kakashi) feeding the terrible rice to the three free range chickens scratching around (unnamed, as far as we know), as well as reading and browsing the web for ideas of what do to tomorrow. 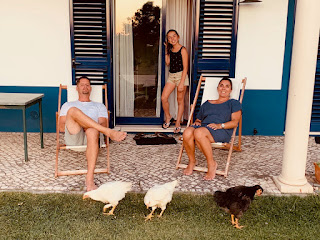 Posted by Kristofor Olson at 11:09 AM