I’m getting tired of all these UNESCO World Heritage sites 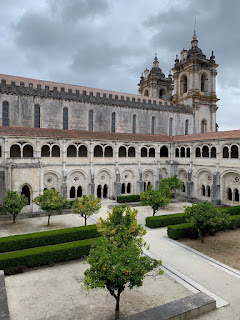 Yes, Paco is a tiny little village, with not much to do, but its location is perfect for day trips as there are so many places to see within a 90 minute drive. After an amazing sleep and hearty breakfast of fresh buns, Azorean cheese, eggs, bananas, and granola, we set off for Tomar, which is the location of the original headquarters of the Knights Templar, or at least the headquarters they built after becoming a fabulously wealthy organization. The driving in Portugal is easy and fun and there are virtually no traffic lights as practically all intersections are handled with roundabouts and the odd stop sign, making me wonder how we cocked our traffic handling up so completely in Canada. But that is a topic for a future post.

The reason we wanted to visit Tomar is my dad and stepmom had visited it last year and Dad said is was one of the most amazing things he’d ever seen. We didn’t arrive until about one hour after opening time, so I was getting a little nervous after yesterday’s human congestion at Sintra, but as we drove up we found the parking lot to be mostly empty, and after walking in the main gate found ourselves to be virtually alone, and feeling very small next to the giant ramparts, stone steps, and massive wooden doors of the front of the structure. Above the doors was a limestone facade, reaching up at least thirty feet, that was carved with elaborate designs and human figures that reminded me a bit of the Sagrada Familia cathedral in Barcelona. The main entrance was actually through a small side door, and we paid our entry fee which was only nine euro for all of us - a pleasant surprise after paying 49 euro for the same privilege at Sintra.

The building was simply massive, but also elaborately designed. The building has a long and fascinating history as it was repurposed many times and added onto or renovated by a succession of Portuguese kings. We kept reading the word “cloister” in the guidebook we have with us, which is a cool word and fun to say, but had no idea what it meant. Well, this building had a series of seven or eight cloisters, which are basically a part of the building that is open to the sky in the middle but is surrounded by a covered pathway. The word also has a religious connotation and usually refers to a holy building where you may find a monk or two. 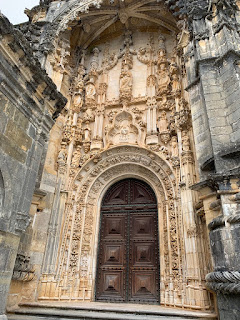 One of these cloisters lead to the main chapel, which was simply unbelievable as it was a domed, octagonal room that stretched up so high you could barely make out the elaborate carvings and painting on the ceiling. There were life sized (or maybe larger?) carved figures imbedded into the walls, and Christian paintings of vibrant colour throughout. Images of the Templar cross (which is thick and red and always appeared on the chest of the uniforms and armour worn by the Templar Knights) appeared in a few areas. 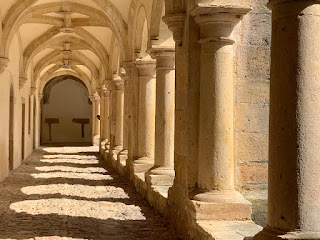 What else did we see? A room filled with massive jugs for olive oil storage, expansive gardens, spiral stone staircases, fountains, limestone latticework on the ceilings, thick engraved stone columns holding everything up, and a four mile long aqueduct built to supply water to the building were just a few of the highlights. The building was simply amazing, and on the same scale as the largest temples in Angkor Wat in Cambodia, except better preserved. It was also such a great example of how fabulously rich Portugal was during the Age of Discovery when their ships were racing out across the globe, bringing back riches that were used primarily to build glorious religious structures. I’m reading a book about the history of Portugal, and one of the overarching themes is how the Portuguese were so good at these daring, bombastic exploits that demanded courage, ingenuity, risk-taking and a real sense of adventure, and these traits allowed them to conquer the world. Unfortunately, what they were not so good at was the boring stuff - long term planning, prudent financial management, and administration, which led to their country’s downfall when the spoils of colonialism dried up to a trickle as they were surpassed by England, Spain, France, and the Dutch. It was a good run. 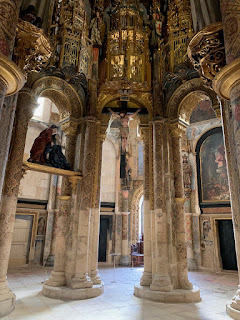 After the visit to the Templars we wandered into Tomar’s town centre and found a lovely area of cobblestoned streets, shops and restaurants and sat down for lunch, where I had the “special hot dog”; special because the wiener was wrapped in cheese and ham before being placed in the bun and then topped with lettuce and crunchy, dried onions - delicious. There was a hipster barber on one of the main streets where Magnus and I tried to get a cut, but they were all booked up. The ladies did some shopping and found a few items of interest before we returned to the car and drove to our next stop - Fatima, the most important religious site in Portugal, and the second most important Catholic pilgrimage site in the world after Lourdes in France.

I knew that Fatima was a place where the Virgin Mary appeared to three young children back at the turn of the 20th century, but I was not prepared for the scale of the site, as I had never seen photos of it. We first walked through the main pedestrian area that was packed with nothing but shops selling religious stuff, and let me tell you, there were more Virgin Mary statuettes there then you could shake a holy septor at. The site itself is a massive open tiled area that can hold hundreds of thousands of people, who religiously arrive twice a year during pilgrimage times. There was a steady stream of people walking on their knees across this area, as part of the final rituals that you perform on a pilgrimage, another of which involves throwing wax candles into a hot oven that creates a waxy odour, pervading the entire area. Through a loudspeaker came the sounds of a woman saying the prayers of the rosary as hundreds of people were packed around, joining in. We walked up the steps to the main cathedral that houses the remains of the three children and was built on the very site where the apparitions occurred. 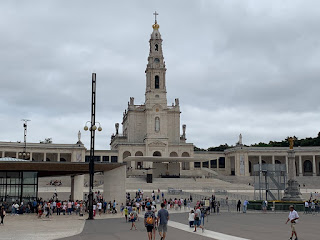 It was an intensive, spiritual experience, that we’ve seen and felt before in other religious sites, such as the Hindu and Buddhist temples we visited in Asia, but I think it was especially strong for Ana, who grew up with the Portuguese catholic tradition in her home. We were wishing Ana’s mom could have been here with us, as this is a place we know she has always wanted to visit. 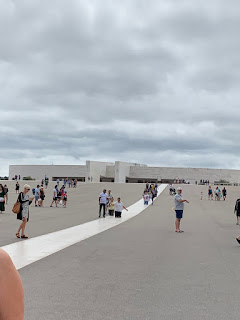 On the way out we stopped in a market area where they sold a huge variety of religious artifacts (Magnus has never met a market he didn’t like, but I would have thought a self-declared atheist like him would have been less interested in a religious market. I was wrong.) Ana found a few items of interest and we asked one of the vendors to explain the reason for these strange candles that were for sale, in the shape of arms, legs, heads, babies, and so on. She explained that people come here with very specific requests, such as to heal a particular body part, or to have a baby, or even to bless their house or car, so they will buy a candle in the shape of whatever they need, and then burn that candle in the ovens as part of the ritual. I asked Ana to look for a catamaran candle that would increase the likelihood of us owning one soon, but she said it didn’t really work like that. It was worth a try. 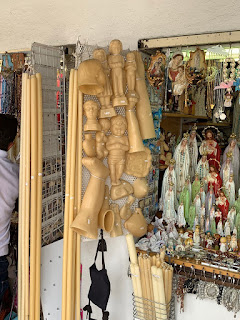 The next once in a lifetime stop (or three in one day, in our case) was the monastery in the town of Alcobaca. It was getting later in the day, but because we were getting a little worn out we stopped for coffee and an ice cream at a cafe just outside the main square. There, Magnus started lobbying to be left out of the monastery visit.

“Dad, I’ve had enough. I don’t even like European history,” Magnus said.

“What do you mean? You love history and ancient stuff,” I countered.

“Well maybe, but I’ve had enough”

“Fine, I’ll snort up a bit of culture, but if we get bored then Stella and I are leaving and coming outside to goof around.”

We approached the expansive area leading up to the monastery and found something unique in all of Portugal - a surface they have not tiled or cobblestoned. It was a field of packed sand that was strangely appropriate, and visually stunning. 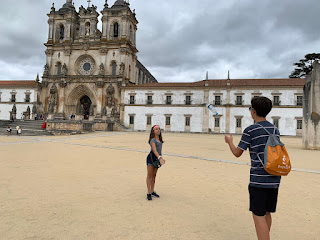 The monastery was overwhelming, from the life-sized carved wooden images of all the kings of Portugal, to the soaring ceilings, to the giant cooking ovens, to the burial chamber for all past rectors, to the fact that all monks here lived by a vow of silence their entire lives, and were only allowed to speak occasionally in a single room, as long as it dealt with the administration of the monastery, like complimenting the chef on the quality of the breakfast oatmeal, or requesting a multi-ply toilet paper upgrade. They weren’t allowed to talk about European football, pop culture, interesting nuns they had met, or anything else of much interest. 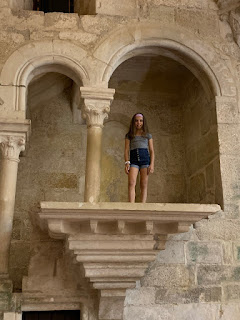 The kids made it through the entire visit without complaining, then we let them rip around outside for a while and visit a few shops before we jumped back in the car and headed to home base. But we weren’t quite done yet. After a short break, we packed back into the car and drove to Peniche, a seaside fishing town just 20 minutes away. And after a drive around the peninsula where we saw dozens of caravans and motorhomes with surfboards strapped everywhere, we were surprised to find a major festival happening in the port side area with thousands of people and a big carnival with rides, a market, games, and legions of black-bearded Portuguese carnies, smoking and huckstering. 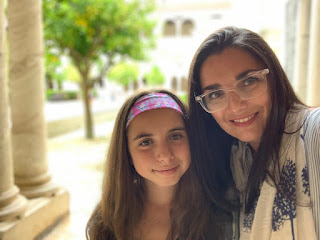 We waited for quite some time to get a table at one of the many seafood restaurants overlooking the fishing port, then once we were seated we ordered up drinks and food. The place was heaving and despite the servers racing back and forth, working as fast as possible, it took forever to finally get our meals, but we weren’t in a rush. My grilled sardines and Ana’s mackerel were just ok, and the kids’ meals were adequate, but the atmosphere was pretty cool with so many people passing back and forth outside and the sounds of the nearby carnival ringing out. We didn’t finish up until after 11 then the kids went on a couple of rides and we wandered around the carnival\. It was well after 1am when we arrived home, so we all collapsed into bed after an unusually full day.
Posted by Kristofor Olson at 4:42 PM