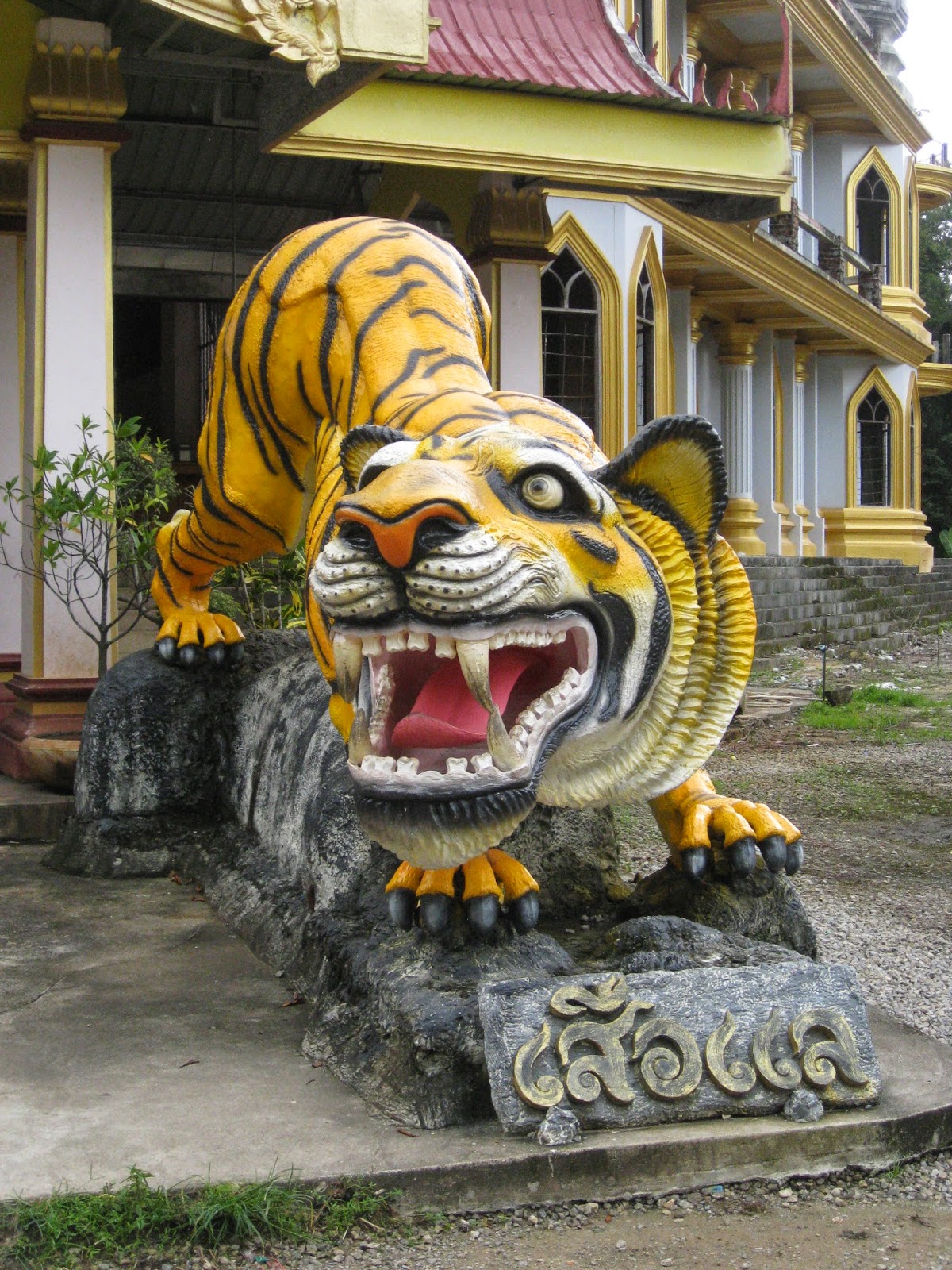 The hotel we were at was quite new, modern, and had a decent design of the rooms and common areas.  But it was dirty, and this was no more evident than during breakfast.  All of the chairs were stained and filthy and we had to search around to find four that we could brush off and use.  There was a construction ladder thrown in one corner of the breakfast area with trash laying around it.  The floor was disgusting and covered in dirt, dust, crumbs, food bits and looked as if it hadn’t been cleaned in weeks.  All the light fixtures were full of dead bugs and dirt and spider webs enveloped the ceiling.  It seems as we move further south towards Malaysia, the areas are becoming much more Muslim and so is the breakfast, which consisted mainly of rice porridge, curries, salad and a bit of typical breakfast stuff limited to corn flakes, shriveled up fried eggs and stale bread.

We decided to explore the area by car so we drove north and east, passing through a highly commercial the outskirts of Krabi town.  Many of the tourist brochures we saw at the hotel had the Tiger Cave Temple so after making several wrong turns (and taking note of an outlet mall along the way) we found the exit for it and discovered the temple only a few miles down the road.  Surprisingly there didn’t seem to be an entrance fee so we drove up, parked the car and looked around the area.  There was quite a bit to take in – besides the imposing and towering main temple, which was guarded by large stone dragons and tigers and seemed to be under construction, there were multiple smaller temples and shrines.  We also found a large cavern in which were many Buddha images and four monks accepting offerings and chanting.  The strangest thing we found was a whale skull on display with a sign below it that said “Beware Monk Stealing Thing”.  I guess you just can’t trust those monks.

High up on one of the mountains, in the far distance was another temple, so we walked on a bit and found the staircase leading up which had a sign boasting “1,237 Step To Top Mountain”  How could we resist?  We walked up a couple flights together then the rest of the gang decided to stay and take photos of the monkey that was hanging around the stairs and I continued on.  Thankfully, it was not hot outside, which could have made the climb unbearable instead of just difficult, as it was.  I made it to the top, briefly noticed the magnificent view to the fields, city and ocean, then went straight to the giant gold Buddha, put my face on the ground and said a prayer of thanks for my family and all the opportunities this life has given me.  I don’t know even know who the prayer was to – God, Buddah, Allah, or maybe just to myself.  It didn’t matter because in such a spiritual and overwhelming place you cannot help but be thankful, humble and very much in awe, and you are obliged to do something other than just stand there and say, “Cool.”

The walk down was quick and my family was patiently waiting for me at the bottom.  We returned to the car and drove back towards the previously discovered outlet mall.  Now, it was my turn to wait, though I didn’t have to wait long as Ana announced that this was the worst outlet mall she had ever been to.  Yesss!

On the road map we saw another beach area called Yao Beach to the east of Krabi so we headed in that direction to see how it looked and if there were any interesting places to stay.  What we found was a giant beach, devoid of humans, but covered in crabs, seashells and other sea debris deposited there by the waves.  Though there were several hotels in the area, they all appeared to be closed, so after playing on the beach a while we headed back towards Krabi Town.


By the time we reached the town centre, found a parking spot, and got directions to the night market, it was dark outside and getting darker as the storm clouds rolled in.  The night market was large and had so many food vendors we had trouble deciding what to eat, but in the end, would up with a shared meal consisting of one giant grilled fish resembling a giant sardine, a roasted squid on a stick, chicken satays, a bag of deep fried fish pieces, several skewers of grilled prawns, a plate of pad thai, a giant frozen orange juice drink and a large Chang beer.  Halfway through dinner the sky opened and it began to pour.  We found shelter under a roof, finished up the food, then I sat nursing the rest of my beer while the others went for a quick look around the market.  Finding nothing but soggy clothes and vendors packing up, they collected me, we returned to the car, and then somehow managed to find our way back to our hotel in the black, rainy night.
Posted by Kristofor Olson at 9:05 PM