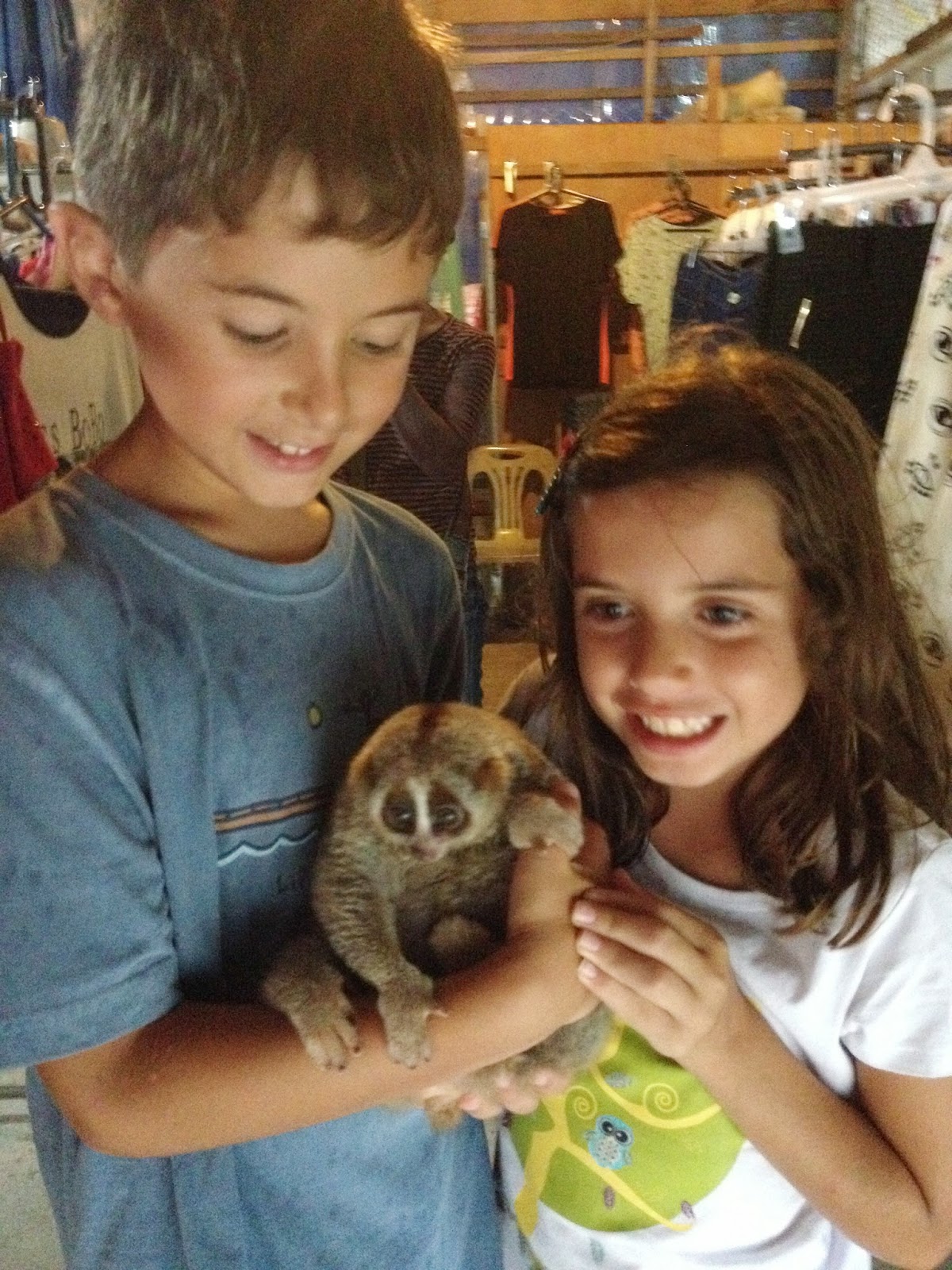 Today we decided to do a day trip north of Khao Lak to see what we could find.  It had been overcast and raining on and off the past couple days so we thought it would be a good time to go for a drive.   We had a good breakfast at the hotel then jumped in the car and headed north on the main highway.  The town of Khao Lak stretches for quite a long ways, at least several miles, with an assortment of shops, restaurants and other buildings on both sides of the road.  We spotted the Tsunami Memorial Park and museum so pulled the car over to have a look.  In the park was a large army patrol boat which had been washed inland during the 2004 tsunami.  The boat had actually been in the bay keeping watch over the king of Thailand’s daughter and her family as they were spending time on the beach.  When the tsunami hit, the king’s grandson was killed and the patrol boat was dragged by the water through two kilometers of hotels and trees then across the main highway and was unceremoniously deposited in the jungle.  The government decided to leave the boat there as a memorial to the disaster and a stark reminder to the power of nature and the fragility of the human condition.

We also visited the museum next door which had some interesting displays explaining how the earthquake occurred and just how massive it was.  This was the fourth deadliest natural disaster in history and the third largest earthquake ever recorded – it shook the entire planet and even triggered earthquakes in other parts of the world.  It caused the deaths of nearly 300,000 people.

There were separate rooms with televisions showing documentaries on the tsunami, and we made it through one of them, but really couldn’t stand to watch anymore as it was so sad.  There were many villages in Indonesia that were completely destroyed and entire families that were wiped out.  Indonesia was the country with the greatest number of victims, followed by Sri Lanka, India and Thailand, where a large number of the dead were Europeans on vacation.

After that somber visit, we continued driving and made our way north about 20 miles in search of Ko Kho Khao island.  This is a large island just off the coast that we read about in a local tourist guide at the hotel.  Though the article said it had a vehicle ferry and some amazing beaches, we weren’t sure if it was accessible during the off season.  After winding through dozens of local roads, and stopping to ask directions at two mini-marts, we finally found the jetty and, though the vehicle ferry was in operation, we were told there was hardly anything open and the island was practically shut down.  So we decided to give it a miss and instead continued along the highway to the town of Takua Pa.

Takua Pa is one of those places we love going to when traveling.  It is a regular, working class city with absolutely nothing of interest to tourists, which means, there are no tourists.  We had seen some signs along the highway for some sort of shopping centre so when we pulled over to fill up the car with gasoline and were waiting as the attendant filled it, Ana asked her, “Can you tell me where to find the shopping centre?”  The girl looked completely stunned and simply giggled a bit.

“Shopping centre?  Shopping?” Ana asked again.  More giggles.  Then she remembered one of the signs had a KFC logo on it.

“Big C, Big C,” she exclaimed enthusiastically, then rushed over to get her manager who spoke English.  He returned with her and said, “Hello!  What are you looking for?”

Ana asked, “Is there a shopping centre around here?”

“Yes, just drive straight ahead, cross the bridge and you will see it on the right,” he replied in nearly perfect English.  The attendant and her friends were still giggling in the background.

“Thank-you,” Ana said then turned to me with, “What the hell is Big C?”

“I don’t know, maybe some sort of Thai greeting?” I pondered.

We drove straight ahead, across the bridge, looked to the right and saw a massive sign that said, predictably, “Big C”.  That was the name of the shopping centre.

We pulled in, parked the car, and Ana beelined for the huge box of mens’ shorts out front, trying to find something in my size.  It soon became apparent that the shorts were used, dirty and most had stains, but were a real bargain at three dollars per pair.  This to me was a new low.  I am used to Ana bringing home used clothes for me from Value Village, Salvation Army and other charity shops in Canada, but trying to find used shorts for me in Thailand, when I didn’t even want more shorts, struck me as exceptionally funny.  After the kids and I pulled her away from the sidewalk sale, we went in to discover a nifty little mall that sold everything from cars to cosmetics, groceries to fried chicken, mobile phones to toys, and it had a small games area for kids that included coin operated karaoke booths.

We were quite hungry by this point so we decided to go for the KFC cholesterol boost and got ourselves the family pack.  It was absolutely delicious and a welcome change from all the rice and noodles we’ve been living on.  The KFC even sold egg tarts, which are remarkably similar to the Portuguese cupcakes (queijadas) we all love so much, but are served hot.  We got one to sample and it was delicious.

We wandered around the shopping centre for a while and got plenty of interested smiles and curious looks, confirming my suspicion that they didn’t see too many tourist visitors here, which was also a nice change from the other places in Thailand where we have been spending our time.

On the way back to Khao Lak we stopped at a huge market, just outside of town, as we had been told it was only open two days a week, one of those being Wednesdays.  It was packed full of tourists, and quite good as they were selling such a huge variety of items and the prices seemed reasonable.  I did my usual trick of token looking in one or two shops with the family unit then went off to find a drinking establishment, and the one I found was perfect.  Instead of the ubiquitous “Free WiFi” signs you see hanging in front of so many places, they had a sign that said, “Free Hi-Five’s” so after getting my enthusiastic Hi-Five from the barmaid, I ordered up a Singha and got comfortable while the rest of the family continued their market wanderings.

There has been a real dearth of music on this trip in the countries we’ve passed through.  It seems they do not have a strong music culture in Southeast Asia as opposed to Latin America and the Caribbean, where there is music playing at all times of the day from every single stereo or radio that works.  But the bar where I sat was playing an incredibly diverse set list of music (Eagles to Macarena to Bob Marley) so I sat, sipped and enjoyed watching the people passing by.  After 1.1 litres of Singha beer and half a pound of peanuts, the gang returned with exciting news – there was a lady in the market with a baby Slow Loris and both the kids got to hold it and get their photos taken!  The kids were so happy.

We left the market shortly after that and returned to the hotel for a quiet evening after a very busy day.
Posted by Kristofor Olson at 8:56 PM