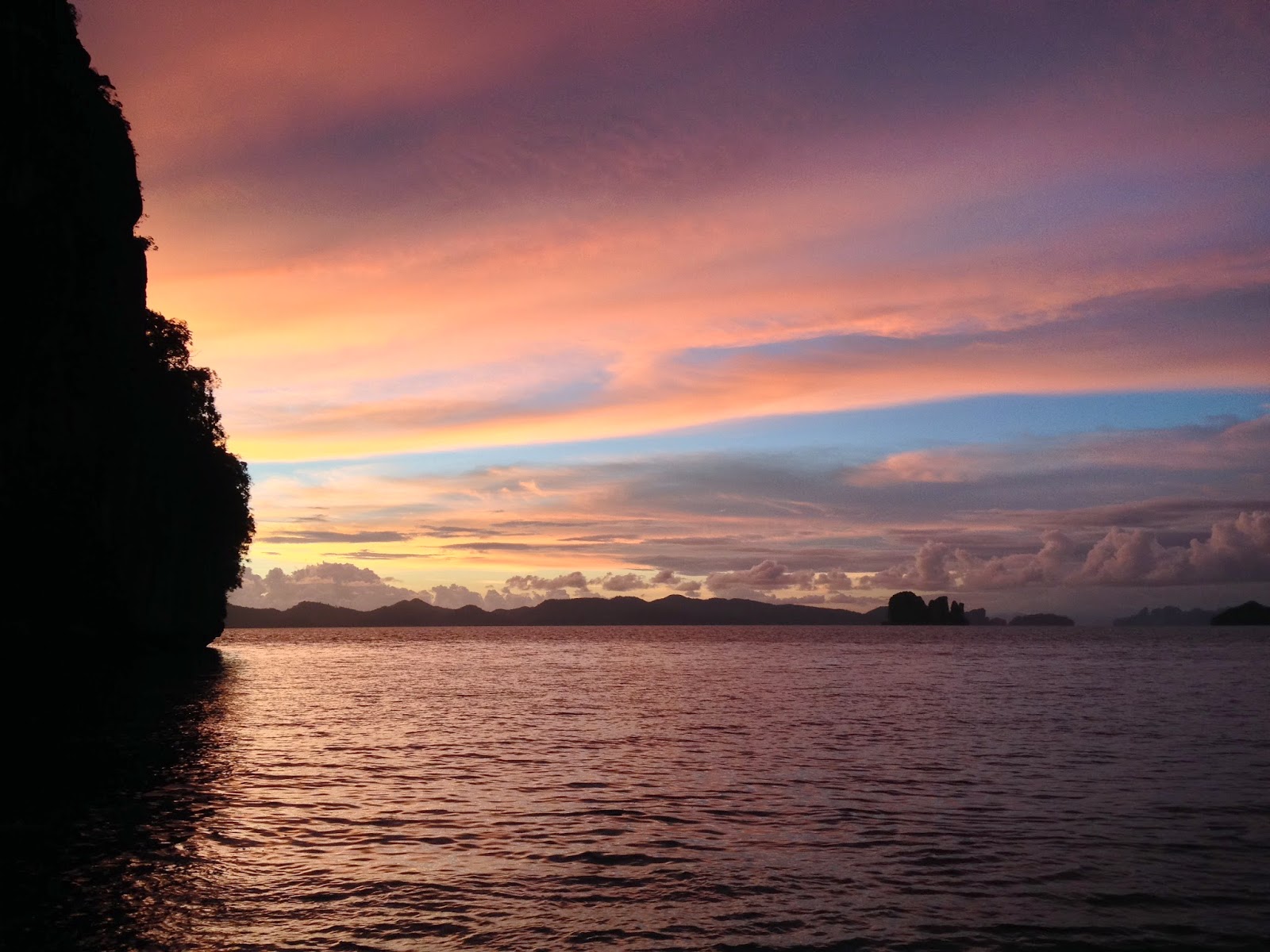 We awoke to a stunning sunrise and another calm, tranquil morning with the sounds of birds coming from the island.  Toddy and I were up first and went for a morning swim and bath in the ocean, then were followed a short while later by Magnus, who I soaped up on the swim platform then threw into the water to rinse off.  The ladies, being more civilized (and certainly more modest), used the shower instead.  As we were drip drying in the cockpit Toddy looked up and noticed that there was a heart shaped image in the rock wall beside beach, so this would henceforth become known as the “Heart Rock” anchorage.

After a satisfying boat breakfast of cereal, fruit, fried bread and eggs scrambled with all the leftover meat crud on the grill from the previous two dinners, we threw off the mooring line and set sail.  Our target for today was Koh Phi Phi Don island, one of the most popular tourist spots in Thailand, which was approximately 20 miles to the south.  One of the peculiarities of the pronunciation of the place names in Thailand is that the letters “Ph” are always pronounced simply like “P” and not like “F” as you would assume as an English speaker.  So yes, it sounds like Pee Pee Island, but is only strange the first couple times you say it.

As we sailed along we could soon see Phi Phi’s shadow in the distance, and a large storm system approaching it.  So we decided to alter course slightly for the Bamboo Islands which are a couple miles north of Phi Phi and could offer some shelter from the storm blowing from the west.  As we approached the westernmost landmass, called Mosquito Island, the ocean swell was really kicking up, so we tucked into a small bay, but were not able to anchor as it was too deep, so we continued down the windy side of the island to the end and were thinking of going straight to Phi Phi, but by now the winds were blowing at close to 30 knots and the sea was very rough, so we turned back north and travelled up the east side of Mosquito Island, which was calmer, but still quite rough, and by now the rain was pounding so hard, and so horizontally, that it was difficult to keep my eyes open.

We found a spot just off a beach where there were several boats anchored, and though it was hard to believe, there were a few tourists attempting to snorkel on the reef!  We dropped anchor then sat down to have lunch while we waited for the storm to break.  The storm cells that pass through are generally quite small and do not last much longer than an hour, and this one turned out to be the same.  But when the storm is hitting, the skies are entirely grey and the wind is thrashing your boat, it feels like it will be stuck in for hours.  Sure enough, just after we had eaten, some light appeared in the western sky and suddenly the storm was gone, leaving sunshine, calm and only wisps of clouds in the sky.  As soon as it broke, all the boats which were anchored on the reef pulled out and took off, leaving only us.  Perfect, now we had this entire reef and beach to ourselves for an afternoon of snorkeling in solitude.  But we were wrong and soon realized we were in the eye of a different kind of storm - a Tourist Storm.  Within 20 minutes seven new boats had arrived, thrown their anchors out on the reef and each let a seemingly never ending stream of masked, snorkeled and finned touristos into the water.  After a short time, three of those boats left, and four more came in to replace them, and this continued on the whole time we were there.  As we looked out there were hundreds of people snorkeling on the reef, and it looked like there was to be no break in the action, so we suited up with our own gear, leaped in and started swimming towards the reef.

Though Stella had tried a mask and snorkel several times, she had never really gotten the hang of it, but was ready to try again today.  During the swim in, she couldn’t keep her face in the water for more than a couple seconds, then she would pop her head out and continue breathing through the snorkel.  But by the time we reached the reef, and the thousands of fish appeared, and the many coral heads, she was transfixed on the wonders below her and snorkeling non-stop.  To me, the reef was not in great shape, as much of it was dead and there was not a great variety of fish (not to mention the old, discarded boat battery I saw lying abandoned in one spot), but for a little girl seeing a coral reef for the first time, it would have been overwhelming beautiful.  By the time we swam back to the boat, Stella had become a snorkeling expert.

After we were all back in the boat, we pulled anchor, sailed over to Phi Phi and continued down the east cost of the island, along the way discussing the incredible volume of tourists we just experienced, and imagining what it must be like during the high season.  We actually felt quite sad, as it was clear there were no rules for the quantity of boats that could haul tourists around and definitely no training for the people snorkeling as we saw loads of them standing on the coral with their fins, which is a big no-no.  But when the boat operators are throwing anchors right down into the reef it’s no wonder the tourists are similarly careless.  I’m glad the kids got to see it now, because there likely won’t be much of anything left to see on that reef in ten years.

Along the way we saw three beautiful, long beaches with what looked like lovely resorts behind them.  At one point Ana pointed at something in the water – a dolphin!  We saw two flashes of his dorsal fin, but then he disappeared as one of the many longboats beared down upon him, obviously scaring him down into the safety of the deeper water.  I had hoped that we’d see many dolphins, but we found out later that there are very few dolphins in these waters so we were very lucky to see even one.

We were soon at the south end of Phi Phi and turned northward into Ton Sai Bay, which is the main jetty for boats going to and from the island.  And it was busy.  I mean, real busy.  There were dozens and dozens of boats zipping around in the bay, and just as many anchored and on mooring balls.  Though it’s not possible to see while on the water, there is another bay north of this one, and two of them are separated by a sandspit, on which the town of Phi Phi is built.

We sailed across the bay over to a beach we had heard had a population of monkeys.  We got close enough to see the monkeys on the beach, but it was difficult to get a good look because of the fifteen boats and three hundred tourists all jammed together on the sand taking pictures of them and feeding them watermelon and bananas.  Instead, we continued into the bay, hoping to find a place to anchor to go into town.  After weaving through a dozen boats and mooring balls we found a spot that looked okay, dropped anchor, and had a tough time getting it set into the bottom, but when we finally did, looked at all the boats around us and just didn’t feel comfortable leaving our boat there.  It’s like the old poker saying – if you find yourself in a game and aren’t sure who the idiot is in the group, then it is probably you.  Well, we looked around at all the local boats around us and were quite sure that we were the idiots, so we pulled up anchor and started back to Monkey Beach, which at least had a nice mooring ball we could tie onto.  Along the way another storm system rolled in and soon both Toddy and I were at the helm, both wearing masks to be able to see, watching the heavens open around us.  Sadly, the mooring ball we had seen earlier was taken by a local boat, so we let down the anchor, got it set, then stood in the cockpit, entranced by the sheer quantity of water coming down.

Happy hour was called, so Toddy and I cracked a beer and Ana had a tea while we sat enjoying the cool temperature (the outside temperature had plummeted from 28 degrees to 22) and talked about the day’s events.  After a while, we were finally calm and relaxed, and our nerves, shattered by the two storms and failed anchoring, had stopped firing.  We looked to Monkey Beach and noticed there were no longer any tourists.  We also noticed there were no longer any monkeys.  But that was strange, because earlier we had needed binoculars to see the beach close up.  Oh, that’s because during happy hour our anchor had come loose and we had dragged about 200 meters right down the shoreline and were nearly past Monkey Beach and approaching the rock cliffs and reef!  Nerves firing afresh, we shot up and I frantically started the engines while Toddy and Ana scurried to the bow of the boat and started retrieving the anchor.  We got the anchor up, returned to the original spot (though a bit further out) and dropped anchor and made sure that bastard was set by putting the engines in full reverse for several seconds and ensured we were not moving.

With that, we made dinner and then called Movie Night.  So we fired up the two laptops – kids in their cabin watching the Lego Movie and the three of us in the main salon watching a terribly stupid movie called The Double where the final scene was a room filled with a gigantic spider.  Damn art movies, they just don’t make any sense, unless of course you have a nice hit of LSD handy.  We only had beer and wine so probably should have watched something with Will Ferrell instead.
Posted by Kristofor Olson at 12:52 PM