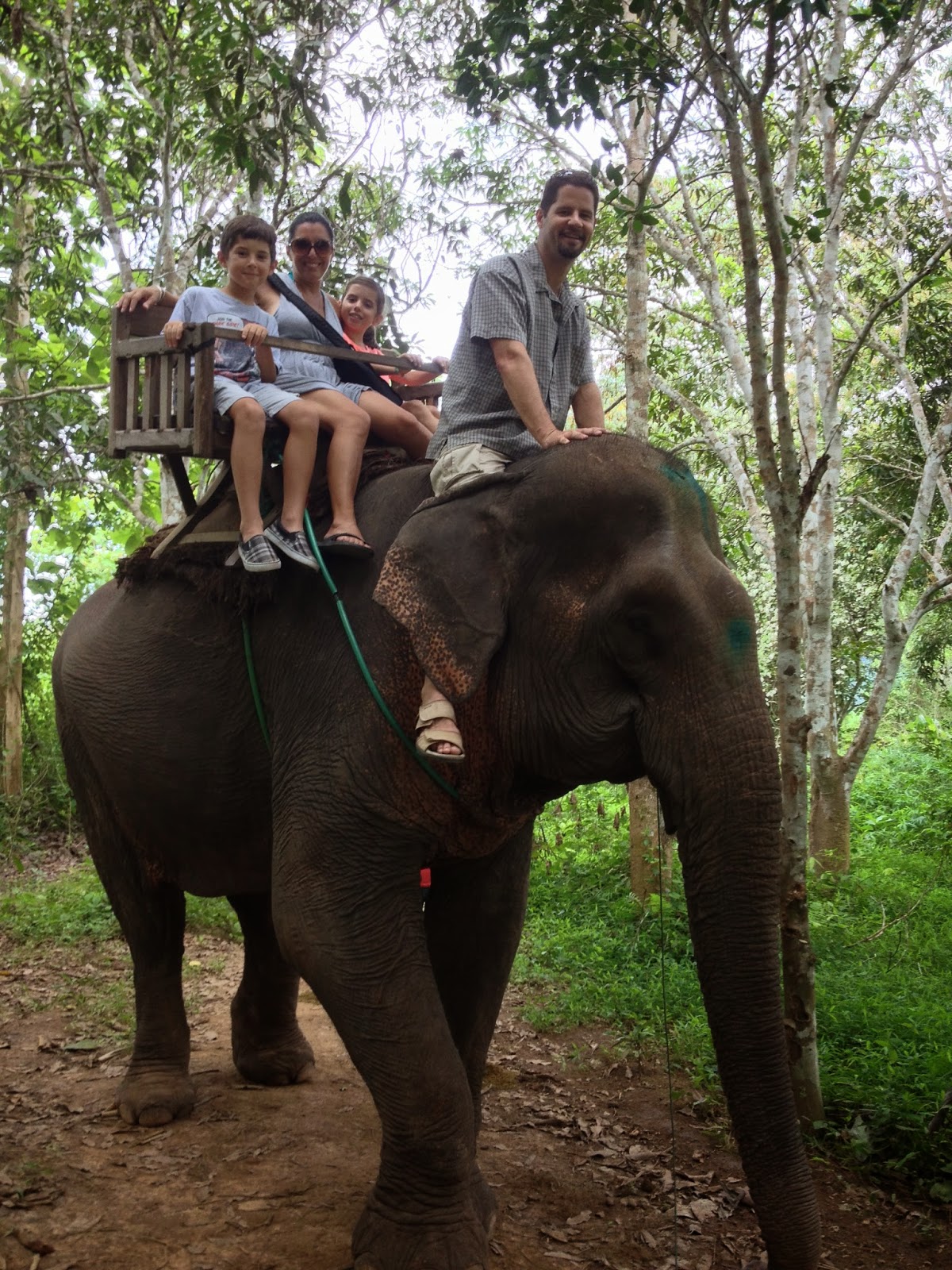 When you are on a one week vacation it’s fun to do several “day trips” as part of your holiday, such as a guided tour to historical sites, a day of fishing and so on.  But on an extended trip, it’s not really feasible for the budget to be doing day trips all the time, so you need to be selective.  So far, we did the turtle watching in Malaysia and scuba diving in the Perhentians.  Well, today we did a day trip that we will remember for a long time.

We arrived at the shop where we bought the package by 8:30, but had to wait a few minutes for the last two people to show up, and when they did it was a bit of a surprise as it was a young American couple and the girl had a giant shiner in her right eye and was clearly extremely hung over.  I was sure there must be a good story there, but that would come later.  So the driver, the guide and nine customers took off in the mini-van which was in pretty good shape, except like all the rest of the vehicles we have been in, the shocks were completely gone so I received a number of free chiropractic adjustments as we slammed through the larger potholes.

After about forty minutes we arrived at our first stop – Whiskey Village.  Yes, cool name for a bar, but probably not the town you want stamped on your birth certificate, though I soon realized that wasn’t the real town name; they are just know for the rice whiskey and wine they produce.  We followed the guide and wandered through the village.  There wasn’t too much of interest until we reached the town temple, which was quite impressive with its freshly painted Buddha statues and structures.  Beyond here, was a street with many of the locals selling handicrafts, then after this the guide showed us the rice fermenting operation.  There were dozens of large urns, each of which was full of fermenting rice emitting a dizzying, boozy aroma.  He offered each of us a sample shot of both the rice wine and rice whiskey, which was pretty tasty.
By this time, Ana had struck up a conversation with the young couple and we learned their names were Alex and Angel, and they were from the state of Utah.  The guide offered Angel a shot of booze, the mention of which made her gag as she politely declined.  Alex told us she had a nasty run in with a toilet the previous night.  They had been at a local bar, then around 11 (the state regulated closing time) followed the crowd of backpackers in tuk-tuks to the famous bowling alley, located a few kilometers out of town, but famous because it is the only venue which remains open all night serving booze.  Well, she was in the mood for drinking so by the time they returned back to their guesthouse at 5am all motor control was pretty much shot and she took a nosedive into the side of the toilet, bashing up her eye in the process.  I felt quite bad for her, as I’ve been in that situation too many times to remember, and it made me appreciate the state of non-hangover I was experiencing.

We were shuffled back to the mini-van, breaking up the game of “catch the chicken” which Magnus and Stella were enjoying, as here were a dozen speedy little chicks racing around the rice urns.  We were driven a few minutes to the elephant camp, which was right on the riverbank and housed four beautiful Asian female elephants.  The served us coffee and tea under the covered lunching area, then took us over to the launch pad where you climbed a platform so you could get loaded on the elephant.  Each elephant carried a royal bench saddle, and as it only had room for three, I was allowed to ride ahead of the saddle, right on the elephant’s back!  The elephant’s head was covered with short and incredibly coarse wiry hair.  My legs hung down behind her floppy ears, and when she had them tucked away at her side, it was very hot on the legs, but she would frequently fan them out which allowed some air in.  Once we were all loaded, we took off, or perhaps it’s more appropriate to say we moseyed off, as elephants really don’t move too fast.  The elephant’s trainer walked ahead of us guiding the elephant along the path, which snaked its way into the jungle, and we trudged along, going up and down several steep hills at a slow, but steady pace.  There were two elephants with riders behind us, both of which frequently stopped to rip some grass out of the jungle for a quick snack.  I think our elephant must have been the matriarch as she was the largest and set the pace, didn’t stop to snack, and frequently let out a deep rumbling noise of admonishment to the misbehaving youngsters.  I looked back a couple times to see Angel trying to nap in the constantly swaying elephant saddle – that must be one severe hangover.

The trek lasted nearly an hour and when we arrived back to the camp, the elephants were each given a large rod of sugar cane, which they somehow snapped into pieces with their nimble trunks then gobbled up.  We got off the elephants and were allowed to grab more sugar cane rods and feed them to our elephant which was really neat, especially because we could get right next to her, look into her eyes, feel her trunk and touch her skin.  Magnus had a bag of peanuts and wanted to test the theory that peanuts are an elephant’s favourite snack.  One of the trainers took a handful and offered it to her.  She sniffed it with her trunk, and quickly turned away.  So he then took a handful, reached in behind her trunk and threw them directly into her mouth, which she promptly spit out.

Next up on the ultimate day trip was a visit to the Buddha Caves.  The mini-van took us away a short distance to another small village, where we were lead down to the Mekong river and piled into several long boats, then ferried to the cave location, which was directly across.  We visited two caves here, an upper one which required a lengthy climb to get to, then a lower one which was only about 20 metres above the river level.  Inside the caves were hundreds of small Buddha statues, places on altars and in any indentations in the cave wall which would allow.  After a brief look around, we boated back to the lunch area, noticing along the way how incredibly hot it had become, then jumped in the mini van and were taken back to the elephant camp for lunch with the pachyderms, as they were wandering around the yard and eating sugar cane we enjoyed our rice and chicken.

The final stop for the day was to the Kouang Si Waterfall, which was an hour drive from the elephant camp.  The scenery here was overpowering – imagine walking up a path in dense jungle, with the smell of green all around you, then a giant waterfall appears before you (and, predictably, hundreds of people) which empties into a succession of perfect bathing pools.  Stella, Magnus and I swam through one of the pools up to where the water was cascading over the rocks and Stella says to me, “Daddy, is this…you know, real?”  And I knew exactly what she meant, as it was so perfect it seemed like something you would find in a Las Vegas hotel.


There were at least a dozen separate pools so we swam in a few of them, but the final one was the best, as it had a large tree hanging over a deep pool with a launching platform to leap in, and was also full of these little fish that like to nibble the dead skin on your feet.  They are the same ones used in the Chinese fish spas, which we were planning to try out here, as these spas are plentiful, but we all tested it out by standing in the shallows and letting the fish nibble away.  It turns out that I’m the only one who enjoyed it, and I let them nibble away until my feet were soft, smooth and silky.

By 5:30 the pools had emptied of people so we had a few minutes to ourselves, then walked back to the van, along the way passing their bear sanctuary where they had a bunch of Asian black bears walking around in a big enclosure.

Before long we were back at our hotel in Luang Prabang and finished off this extraordinary day with another walk through the night market and a delicious dinner at a nearby restaurant.
Posted by Kristofor Olson at 9:24 PM