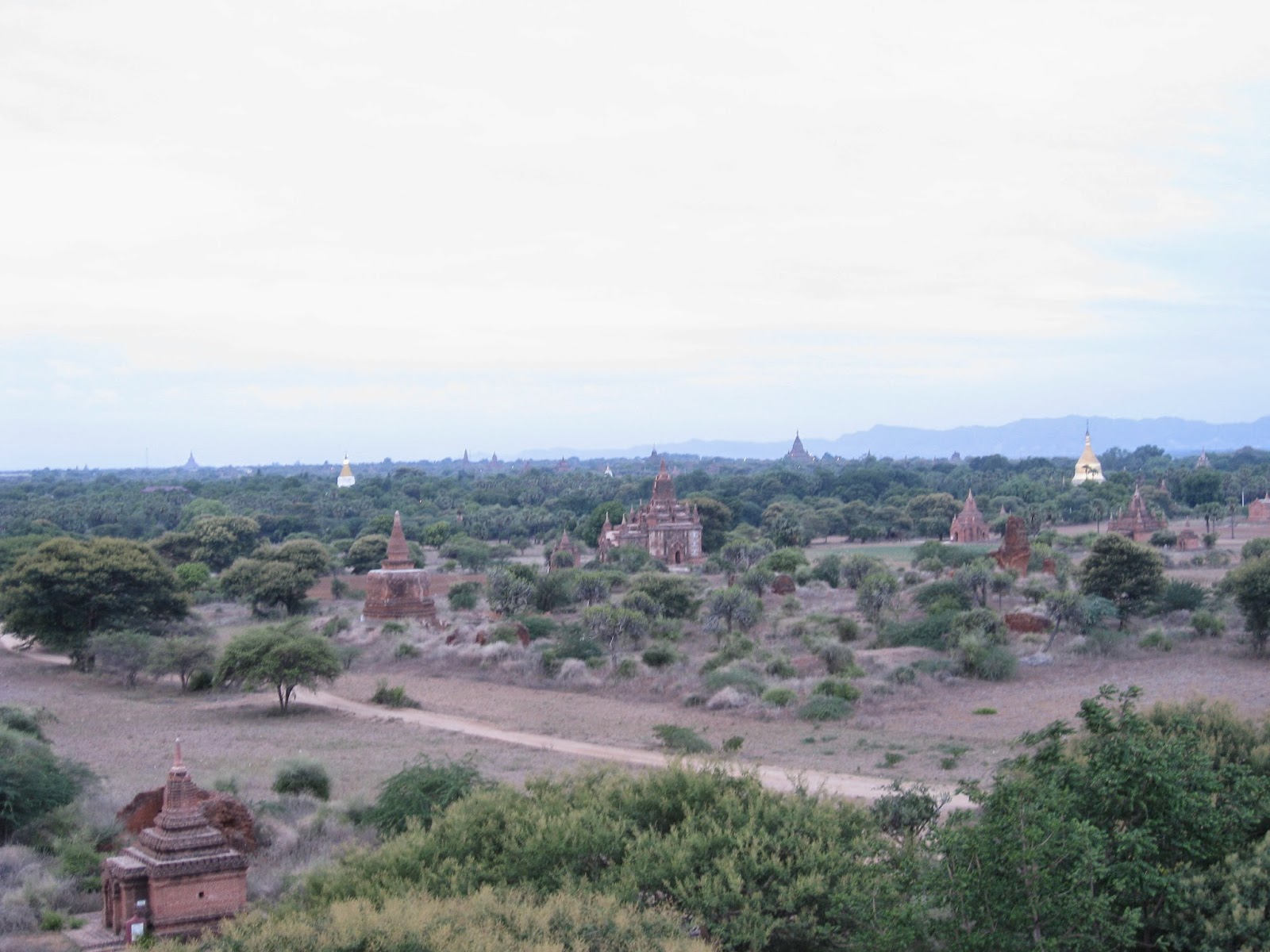 Just after midnight I woke up for the tenth time and looked around me.  I was crammed into a slightly reclined bus seat and my legs were numb as they were strangely folded to allow them to squeeze into the wee bit of legroom available.  Actually, the rest of my body was numb too and I was shivering because the temperature on the bus was probably below 20 degrees as the driver had the AC cranked up to maximum.  On the single giant television screen was a horrible Chinese soap opera playing, overdubbed with Burmese, looking like it was filmed with an ancient handycam, with the volume so loud it was completely distorted.  To make things worse, there was some sort of interference from the engine so every time the driver hit the accelerator there would be a sustained, high pitched squealing noise that ripped through your eardrums.  The bus left Lake Inle the previous night at 7 pm and by the time 9 pm rolled around we had already pulled over for a half hour meal break and stopped seven other times, seemingly for the bus driver to stop and talk to his buddies on the side of the road, as no passengers were getting on or off the bus.  I went up and asked the driver to turn down the AC as everybody on the bus was shivering but he simply shrugged and shooed me away.

At 4 am we arrived in Nyaung U, a town in the Bagan region of Myamar, and as we dragged our twisted bodies off the bus we were met by a throng of tuk-tuk drivers, local guides and hustlers, all talking at once, trying to convince us to hire them for whatever they had to offer.  In cases like this, my policy is to shove through the pack, don’t make eye contact with anybody, get my bags from the luggage compartment, then go stand to the side away from all the people and take a minute to regroup.  Three of the hustlers followed me over there and were trying to talk us into coming to their hostel.  I told them we already had a place and just wanted a price for the taxi ride.  Here’s the negotiation:

“I’m not paying ten dollars, that’s way too much,” I replied.

“It’s very far to the hotel”

“No it isn’t.  And we paid six dollars for a 90 minute taxi ride in Yangon a couple days ago”

“It’s 14 kilometres to your hotel, very long way,” he says as he motions to one of his flunkies who then pulls out this giant plastic map and shows us how far it is.

“It’s not 14 kilometers, it’s half that distance, I already know that.  We’ll pay five dollars, that’s it,” I told him.

“No, ten dollars,” he counters.

“No thanks,” I say and walk over to another shyster to ask for a price to our hotel.

We load our stuff in the taxi and yet another flunkie drives us to the hotel, along the way passing through a checkpoint where all the foreigners had to pay $15 for a visitors pass to the area.  Along the way, we pass dozens of temples and pagodas, some which are magnificently lighted, making quite an impression.  We arrive at the Thande Hotel in Old Bagan and there is nobody in sight, so we walk into reception and find two employees sleeping soundly on the reception couches.  We wake one guy up, who jumps to life, checks the reservation book and tells us they are completely full and there are no rooms available yet, and may not be one until noon.  As it is now 4:30 in the morning, we weigh our options, and decide that this is probably the best opportunity yet for a sunrise experience, so we check the sunrise/sunset chart on the wall (these are the best times to visit the temples) and hire the driver for a half day temple tour.  The driver says he will be back in 30 minutes, at 5am, to pick us up, so Stella gets our her mini-flashlight and we are led to the pool and shown to the poolside loungers.  We each lay down on one…and it feels glorious to stretch out after the horrible bus ride.

At 5 we meet the driver back in the lobby and he drives us a short ways to a huge, pyramid shaped temple, and instructs us to climb up to the top to watch the sunrise.  There are staircases on each side leading up, so we choose one, and find that it is so steep it is more like a ladder in some spots, but we all safely make it to the top.  The scenery is stunning – there is a great plain stretching as far as the eye can see, and on this plain are hundreds of temples, stupas, and pagodas.  The larger ones are lighted but the smaller ones are not, and as the sun slowly rises, even more come into view.  We are not the only ones there and by the time the sun is actually visible there are probably 60 or more people perched on the east side of the temple.  We decide to climb down before the sun was fully up, mainly to get a head start on exploring some of these magnificent temples, but also because there was small group of Cloggies speaking Dutch extremely loudly, laughing, hollering and making a real racket, which was ideal for ruining the sanctity of the moment and disturbing the peace of everybody else there for the experience.

The driver then took us to three gigantic temples, and we were the only people there!  It was very reminiscent of Angkor Wat but better in that we could explore them on our own instead of as part of a massive group of tourists.  One of the temples we entered had bats flying all over the place, and thousands that were hanging off the ceiling, making a creepy squealing noise.  Stella discovered a bat laying the floor so we did what came naturally – poked it with a stick – and found it was alive!  We poked it a couple more times to try and get it to fly, but it must have been sick because all it could do is drag itself around a few inches.

Though each temple was amazing, visually stunning, majestic, and filled with thousands of images of Buddha, by 7:30 we all decided that we were temple’d and Buddha’d out.  Completely.  I have lost count of how many Buddhist holy places we have been to in the past weeks.  But we have clearly reached the point where they are just not making the same sort of impact as they were before.

We had the driver drop us back at the hotel, and hired him to return the following day to drive us to Mandalay for our return flight.  We had hoped to take a boat from Bagan to Mandalay but the timing just didn’t work out and there were no boats departing in time for us to get there in time.

Fortunately, they already had a room available for us so we got settled in, had showers and went down for breakfast, which was mediocre, especially considering it cost $34.  To try and clear up the head and bad mood from the long ride, we got our suits on, went down to the pool and completely chilled out until mid afternoon.  We went for a walk around Old Bagan to see if we could find a restaurant, but didn’t find much of anything so took a taxi back to Nyaung U, with this obnoxious driver who spent the whole ride trying to talk us into paying him more money.  There were many restaurants and bars so we chose one, had a very uninspiring lunch, and then went for a walk around town in the blazing heat and picked up some snacks for the next day’s five hour ride into Mandalay.

We caught a ride in the back of a pickup truck back to Old Bagan, went for another swim at the hotel, then spent the rest of the day hanging out in the room, watching movies, with no inclination at all to further explore the thousands of temples in our backyard.
Posted by Kristofor Olson at 11:05 PM